Interestingly I went into the interface and chose Native DSD and starting successfully streaming a DSD256 file from Roon to the Sonore Signature Rendu SE with a USB output to a KTE SU-2 DDC which then outputs i2S to the MKI.

I haven’t tried this before, but it does work. 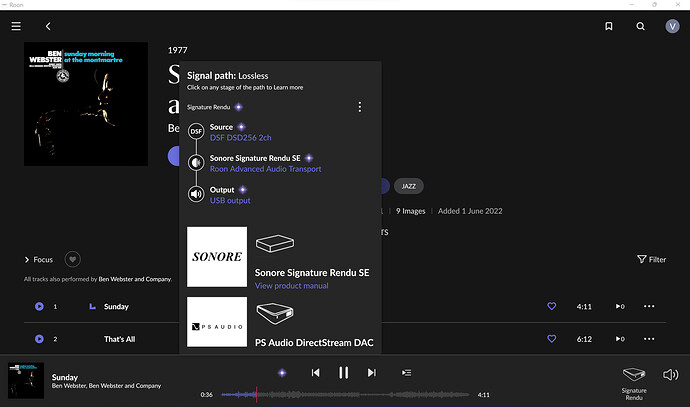 Regarding USB isolation, is the isolator powered by USB source ?

Or the upstream isolation gets its power from the DAC?

Also is there any isolation between digital and analogue boards?

I guess it can’t be as good as TSS with optical link and each box with its own power supply but maybe gets as close as possible with one power supply in one box ?

The isolators I use have power supplied on each side, but I run all of the USB off of an isolated 5V supply powered by the digital card. (The same 5V isolated supplies I use for the two I2S inputs.) There are isolators which have builtin isolated supplies, but all of them I know about are pretty noisy and/or emit RFI. There are also some isolators which don’t need power on one side or the other, optical isolators come to mind, but most are too slow for this purpose.

The DS had isolation too, but that was with capacitors which (like transformers) can let high frequencies leak thru.

Can’t wait to take a DS II for a spin.

The isolators I use have power supplied on each side, but I run all of the USB off of an isolated 5V supply powered by the digital card. (The same 5V isolated supplies I use for the two I2S inputs.)

Thanks Ted! For USB, is there any reason you chose not to make the isolator powered by USB source?

Or it wouldn’t change anything in terms of pathways for noise to get through the DAC?

The TSS is the no compromise solution obviously

The power from the USB cable is very noisy. The power from the digital card to the USB is clean. There’s very little backwards path thru the 5V DC to DC power supply for noise. The USB and I2S supplies are controlled by the FPGA so they are also synchronous with the system clocking which keeps the power supplies clocks from adding clock phasing noise to the box.

Noted but if the DAC side of isolator is powered by digital board, isn’t the source side power noise irrelevant?

Then DAC side of isolator is powered by clean power

So there’s nothing “shared” on each side of isolator

I’m not quite sure that I got all of the pronouns correct, so just being pedantic:

Nothing is perfect, there are all manner of very noisy digital isolators out there that not only don’t isolate noise one side from the other but also add their own noise. Most digital isolators are built to pass a low-level digital signal across a, say, 1000V barrier. In those environments a little added noise is, well, in the noise.

The I2S and USB inputs each have an isolated 5V DC to DC power supply driven from the digital board’s 5V. Those isolated supplies are designed from discrete parts to be low noise. All of the electronics on the USB side and the connector sides of each I2S input are driven from their side of their isolated 5V to 5V supply.

Powering a USB receiver from USB power is bringing more noise into the box. It’s convenient and cheap, but not the best isolation.

The funny thing about noise is that you don’t realize it’s there until you hear the same music when it’s not there. There is so much information and musical content that you don’t hear until the noise is removed. I’ve learned over the past 25 years that all electrical components in an audio system introduce unwanted noise into the music, and maybe the main thing that separates great sounding components from lesser sounding components is in their ability to remove noise from the signal before passing that signal along to the next component.

When I moved up to the DS Sr, my system improved significantly in sound quality, but found quality differences between USB input and ethernet Bridge II input. I assume it was because ethernet acted as a way of isolating computer noise from the dac. When I added an Uptone Audio EtherRegen ahead of the DS ethernet input, it provided another layer of isolation from noise, and I was able to hear additional musical content.

Recently, forum member Roninaudio directed my attention to a DCS Debussy dac. As fine as the DS Sr was, the DCS revealed even more musical content to me from the same recordings, and I wonder again if this was because the DCS provided better noise isolation, and I wonder if the main reason the new DS II will offer better sound quality is because it will have better noise isolation.

I owned the DSD Sr. For many years and did the power transformers and analog board power from Jeff. The DAC was wonderful and ultimately it went to a great home with a good friend. Since then, I’ve owned a Waversa VDAC and now a dCS Bartók. The architecture of the dCS is considerably different from the DSD and has evolved over the dCS generations. Visually the internals appear like a ladder DAC but are not. Right now I’m a big fan of dCS and I’m considering moving up the ladder when an opportunity arises. I can understand why you’re drawn in to the dCS sound.

@tedsmith - In the past with the DS MKI you wrote that you would compile the firmware several times for listening tests so @paul and company could choose the version they liked the most.

Are you still doing this with the MKII? If so, has this comparison listening started?

The hope is we don’t have to do it. I haven’t been noticing weird differences but besides Darren I’m sure no one at PS Audio is listening critically yet, the units are needed in engineering. In any case we’re probably not going to worry about it until we pick the software to ship the beta units with. If we need to pick between to multiple versions Darren will do what he has to.

Hi Ted, I’m wondering about the I2S input of the Mk II. Is it only accepting the PSA ‘standard’, or is it adaptable to other standards, including perhaps proprietary ones like from Auralic? Thanks.

It assumes that the physical wires are hooked up like HDMI, e.g. 4 sets of differential high speed twisted pairs, etc.

What those four bits mean is up to the FPGA software. There should be an interface for picking the polarity of each of the three important signals and picking which channel is which in DSD. I’m not sure if that will be in the first beta software release or not.

Interesting! I’m looking forward to hearing your findings/thoughts in further development of what may be a great feature. Although I can think of commercial caveats as well.

Tho often in an FPGA pipelining is the key to performance, for a tight filter doing the channels in parallel can simplify all of the coefficient bookkeeping and handling of intermediate values. Both the DS and the DS Mk II (and TSS for that matter) do the channels in parallel for both upsampling and in the sigma delta converter (tho the volume is pipelined in the middle

Jitter and noise are reduced in the FPGA by doing work in as even of chunks everywhere as possible. This is most effectively done by using parallel sometimes, serial sometimes, ad hoc, … which ever works best in a unit of code. The thing to avoid is one parallel section finishing at a different time than other related parallel tasks. Or to avoid things like two active pipeline steps followed by an empty step…

Each multiply of the eight in parallel on the Spartan 6 was done with three hardware DSP units. On the Spartan 7 only two DSPs are needed per multiply.

The Mk II upsamples PCM to 705.6k where the DS upsampled to 352.8k so there are twice as many multiplies per unit time on the Mk II. I also use wider coefficients on the Mk II and more taps in the filters.

Finally in the DS I found that deleting the final filter for upsampling 48, 96 and 192 to 20 x the DSD rate made things sound better at the expense of a little more noise at 352.8k (which tho not audible, it doesn’t look great on some measurements.) On the Mk II there are two new upsampling filters running in parallel with the original filter for processing 48, 96 and 192k. They have squirrelly up to down ratios and do the math in a different order to save on overall processing and allow the processing to run at a lower rate than a direct 768k to 20 x the DSD rate followed by a decimation of 5.

It was fun redoing all of the FIR filters on the Spartan 7. The 7 series of FPGAs have DSP units directly designed to do wide multiply/accumulates for FIR filtering and they work well. I did spend a lot of time simulating the filters and checking the results with high precision math in Maxima and Matlab.

I also coded up a couple of triple precision IIR filters, but I didn’t use them in the end.

Do you know what the output voltage will be for the DS Mk II over XLR?

The reason I ask is that my integrated amp will stay in Class A if it receives a high enough output voltage signal.

XLR will be 4VRMS and RCA can be selected to be either 2VRMS or 4VRMS.