Yes. It will be interesting to hear the results with these transformers installed in the MKII when it arrives. I hope soon.

Something else I noticed when listening to these new transformers, the DS sound more real without the HDMI i2s shorting plug installed. I am now only using the USB shorting plug.

I just listened to the new 6800pF ´C704 in the cold unit out of the box and they are mandatory for the LL1948. Noticably more open top end, sounds great!

Now again the treatments to get my air back, then Bridge removed and Airlens attached and I’m done

If only Airlens would come….

Still can’t believe the bass change from the VOCM mod. All those HW changes together with the Transformers, the right C704 and the external,PSU …it’s really again another, much better DAC, clearly more realism and 3D, more enveloping, more open, more details, much better bass.

Thanks again to Ted, JK and all who contributed clarifying the mods here (and Paul for letting it flow)!

Don’t forget about turbotk. He is the one who first did the VOCM mod.

Maybe you can interest Ted in this transformer for the TSS as he is a known fan of the Jensen.

Actually these transformers are better than the Jensen’s in this application as my son designed these specifically for our DS.
I think these would be great for the TSS however we would have to work with Ted to make them perfect for his application. Maybe even his Logo embossed in the shield

The PS Audio deal is almost over. If you can swing it, the trade in deal is hard to pass up. I have a feeling it will be unbeatable with these transformers.

Not nice to talk about your son like that… Unless he really did design them spastically, then he’s truly remarkable!

. I have fat fingers.

However my ears don’t fail me.

And the embossed transformer covers are tres chic to say the least!

FYI. They are not covers.

@all with the LL1948: you REALLY need the lower 6800pF C704. It provides a certain grade of top end openness I waited for so long and didn’t have even with the XS4400 without cap.

Easily audible with every resolving cymbal playing or for example analog classical references like the Royal Ballet Gala Living Stereo (AP SACD’). Night and day for those who recognized the previous limitations.

Yes, you are absolutely right. I went back to the full VOCM - LL1948 - 6,8nF for C704 - mod some days ago and i am really satisfied. The DAC does so many things so right, quite impressive!

Unfortunately we know there is still a better solution out there, thanks to @jkrichards and his son. Better is the enemy of good, as usual…

So maybe it is time to get a second DS to perform the mod with the Jensen clones?

Just kidding…or, wait…2nd-hand prices dropping…, more offers to expect…, don´t know…, let´s see. For now it is the best DAC I ever had!

No I won’t do another transformer swap. As it is, everything made sense. The cost of all HW upgrades incl. XS4400, then Lundahl switch & Farad PSU were still below 2k in my case. In the US you’d get a Mk II in exchange for another 1,5k more, which makes sense for those there who can afford. Outside the US it’s different, you’d have to pay a lot more for a Mk II, even if you can sell the Mk I.

Doing the Mk I mods (most did only up to the XS4400) AND buy a Mk II after that (as some did) is certainly the most money burning alternative but I’m sure they are happy, too

Yes. These DAC’s sound awesome. Hopefully there will always be something that will improve the sound quality of these. When there is not then it’s time for a new DAC. Enjoy what you have for as long as possible. When the upgrade itch comes, it’s a fairly inexpensive upgrade compared to a new DAC. A couple months ago, while listening to my DAC with the big Jensen’s I thought to myself it can’t get any better. I was wrong. I can now hear better, the great work Ted did on these DS DAC’s in a very clear, fast and coherent way. One more step closer to realness. In fact I only did the VOCM and the new transformers along with a USB shorting plug. Anyone with a stock unit, I feel this is all you need. The other mods make no or little difference with these transformers.
Anyone want some big Jensen transformers? I guess I will have to use them in the studio for instrument isolation. I wish I had all the money I have spent on upgrades over the past decade.
Enjoy.

Just to.note…over the weekend I might think to go to 7800pF at the end…will see if the 6800pF is a tad too much after some longer listening. But it’s interesting how much we hear what’s over 15k, although I’m quite sure I actually don’t hear it anymore

Are you saying that you don’t need the external analog power supply upgrade with your new transformers?

In fact I only did the VOCM and the new transformers along with a USB shorting plug. Anyone with a stock unit, I feel this is all you need. The other mods make no or little difference with these transformers.

Just to.note…over the weekend I might think to go to 7800pF at the end…will see if the 6800pF is a tad too much after some longer listening. But it’s interesting how much we hear what’s over 15k, although I’m quite sure I actually don’t hear it anymore

You will not hear any difference unless you are super human. It’s barely measurable. 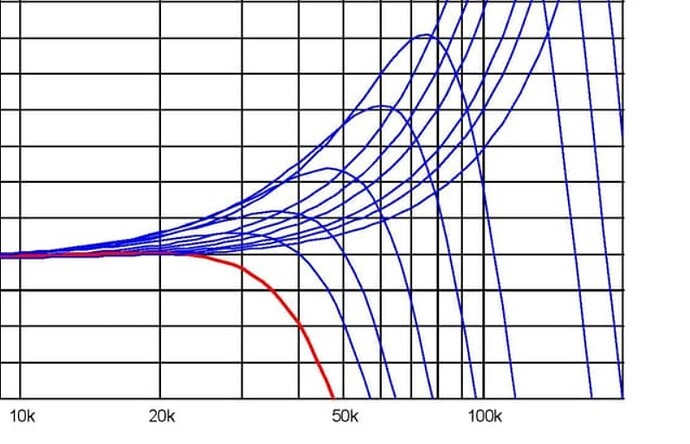 Ok, but the 1,5 dB at 20k from 15nF to 6.8nF were very noticeable. So you think the 1 dB difference over 20k are definitely not audible anymore?

I even wondered that the first change was so huge and didn’t expect to hear it. Probably it’s so obvious because it also has some effect down to below 15k. So somewhere between 6.8nF and 15nF there must still be differences, as 15nF is clearly limited sounding and 6,8nF is very open sounding.

I assume, as we know from CDs’ “perfect sound forever”, what happens over 20k, although not audible, has some effect below? I don’t believe I actually hear over 15k but I don’t know.