Continuing from this thread which Elk decided to close:

Octave Records - why only DSD64 available for purchase? - #27 by Elk 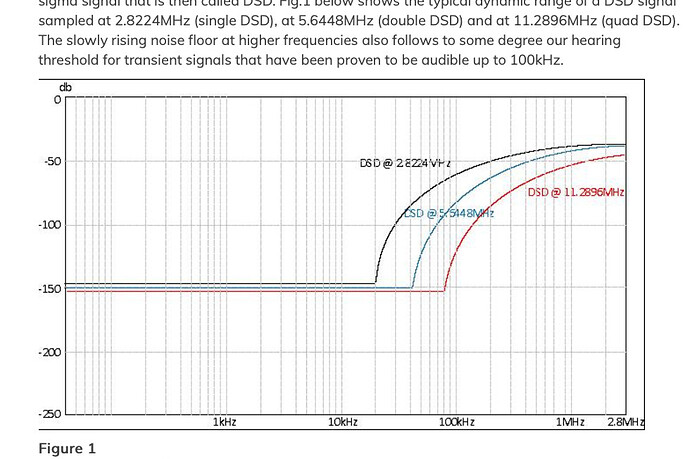 We can see noise at 30kHz and 40kHz getting up to potentially audible levels. The DSD64 analysis in that other thread shows results consistent with this figure above.

Raising the Sample Rate of DSD - Is There a Sweet Spot? - Positive Feedback

Amplifiers like mine which are flat to 100kHz will amplify these signals - which are not music signals.

Sometimes this is not a good thing. Even for the tweeters.

It’s not just about “oh the DSD noise is happening at 30kHz/40kHz, not audible.”

It’s about what this noise can do to gear after the DAC.

Best not to have this noise inside music files, in the first place.

@Elk
@tedsmith provided a crystal clear explanation of the upsampling / jitter trade-off a while back. Even I think I understood it.

You closed that thread yesterday thankfully cutting off at birth a back door attempt to start another discussion about another video that demonstrates ASR’s clear vindictiveness towards PS Audio, trashing an Octave recording for reasons that, even to me, are obviously misconceived. He ended by becoming a music critic and using that as a premise to tell people not to buy it.

@Paul gave Amir the benefit of the doubt, but this latest piece of video trash suggests his generosity got the better of him.

Can I cast a vote to ban any mention of ASR, Amir, directly or indirectly, so as to maintain the friendly atmosphere that usually prevails (my own failings noted).

I’m not a DSD advocate, but I think I’ll blow $29 on a download now to get rid of the ASR stench.

He ended by becoming a music critic and using that as a premise to tell people not to buy it.

I was hoping nobody would mention ASR here in this particular thread… but thanks… here we go again. Sigh.

I wanted to just discuss DSD64 noise in general. It’s noise levels are within the frequency range of many amps, which don’t know what is music and what is noise. It just amplifies signal.

That other thread of mine that got closed was started by me 2 years ago… Paul had no problems with it.

As noted above, @tedsmith explained the issue quite clearly.

As an Economics graduate what hasn’t opened a Physics book since the age of 15, and has never studied anything about electronics and never will, I think I provide the acid test on the clarity of meaningful technical explanations for most users of consumer audio.

As noted above, @tedsmith explained the issue quite clearly.

The issue was explained in the Andreas Koch article I linked very early in the thread. Andreas an old friend of Ted’s I believe…

Ted reinforced the key points about the ‘sweet spot’. Both those guys know their stuff about DSD.

Seeing the noise in a music file is different to just seeing theoretical plots. There was an example where they match.

I seriously hope that the only outcome of this thread is a $29 increase in PSA profits.

@Elk made it quite clear why he closed the last thread after you posted that video, the question has been answered and I may speak for more than myself by hoping said videographer and his acolytes return to their own echo chamber.

I don’t know @Elk’s timezone, but I hope he’s an early riser.

You are the one that mentioned ASR here , not me.

This thread was for general discussion.

If you’re not interested in further discussion of the topic - you can just read a different thread?

There’s no requirement for you to reply to all threads.

My hope is Elk deletes your post which mentioned ASR and just keeps the OP.

Can I cast a vote to ban any mention of ASR, Amir, directly or indirectly, so as to maintain the friendly atmosphere that usually prevails (my own failings noted).

That seems in line with the current trend to ‘no-platform’ speakers you do not like. Without invoking any grandiose arguments about freedom of expression etc, it is not a trend I care for; preferring to make up my own mind. @Elk generally only seems to close threads when they become persistently ill tempered and abusive, and he gives them time to sort themselves out.

Best not to have this noise inside music files, in the first place.

Quantization noise is inevitable with digital music. Noise shaping is used to reduce its impact in the audible band. When I look at spectrum plots for 24/96 PCM I often see a band between 30-40kHz which I believe is noise carried through to the ultrasonic region. I believe the quantization noise is greater for DSD. There is really no way you can avoid it. It is an unavoidable consequence of the process. Noise shaping just renders it less offensive.

There is really no way you can avoid it.

Can record at higher DSD rates. Which Paul has stated is the plan.

It won’t avoid the issue in the digital domain - but many of us have amps that extend to 100kHz, so pushing this noise higher makes it less an issue for amps and/or tweeters.

Per the Andreas Koch article I linked early in the closed thread (image linked above).

If you have a peek at the latest video, only peek is necessary, it’s apparent they really have got it in for PS Audio. You can only extend the hand of friendship so far.

I wanted to just discuss DSD64 noise in general

You already did this in the previous thread, and additionally received specific responses from Ted and Paul.

Your revival of that long-dead necro thread was to specifically post the ASR video critical of PS Audio’s DSD recording. This thread is the same yet again, but trying a different door. Even if not baiting/trolling, the topic has been thoroughly covered in the earlier long-dead thread and elsewhere.