Anyone having issues with a noisy channel on the BHK preamp

what i have been getting in one channel is a loud crackling hissy sound. i am not at all proficient in all this, but the one set of 6922 tubes i had were immediately noisy and they hand picked by Brent Jesse. maybe they were just bad but i would be thinking about going back to the stock tubes.

I hope PSA is able to fix the problems several BHK preamp users have described in this thread. It has to be really frustrating to experience ongoing problems in an expensive piece of gear.

I’m just a new BHK preamp owner whose 30-day trial period is almost over. I’m leaning toward keeping the preamp because it sounds so good, but the tube and/or circuit board problems reported here have raised a few doubts in my mind. I am pretty sure that I will not be diving into tube rolling any time soon, which will at least protect me from tubes that draw enough current to stress out my preamp’s circuits.

I have heard a lot of talk about how Bascom King preferred the 6922 tubes in the BHK Pre, but I have had trouble locating a direct statement from Bascom stating that preference. In fact, I recall reading or hearing about someone asking Bascom directly about use of the 6922 tubes, and he said that he would not have specified the 12AU7 tubes in the design if a different tube would have been a better choice in the BHK Pre. (Unfortunately, neither a forum search nor a broader Google search turned up that quote from Bascom when I searched recently - so it may just be a creation of my less-than-perfect memory.)

At any rate, the BHK is a great preamp, and I’m hoping that sticking with 12AU7 tubes will save me both money and headaches.

Best of luck to all.

After a bit of a search, I haven’t found much about tube rolling experience with the Preamp. It would be interesting to hear what changes have been noticed switching out of the stock tubes to, say, the Tungsram.

Looking at several videos of Paul interviewing Bascom, Bascom does discuss designing early prototypes of the BHK Pre using tubes from the 6922 family, and he thought that the Tungstram 7DJ8 sounded the best of the bunch but was no longer being made. In looking for an alternative that was currently being manufactured, he tried out the 12AU7 because it was a good match for the circuit he had designed. He then modified Arnie Nudell’s prototype to run the 12AU7, which sounded “exceedingly good” and became the stock tube for the BHK Pre.

Although PSA appears to continue to want to allow BHK Pre users to roll tubes, it would be helpful to have a list of tubes that are safe to use and to provide warnings of any risks associated with the use of tubes that draw high levels of current.

One thing I have never understood unless Bascom specifically said that the unit he was using was off of the post Beta production line why people would assume that his hand built unit was the same as the one they have. If that is not the case then while his circuit design would be the same it is highly likely that the parts quality and tolerances are much different which would allow him more freedom in tube rolling. While as an experiment I tried almost two dozen different pairs of NOS 6 and 7 volt tubes from all of the major players other than Telefunken I didn’t find them to sound any better than the 12 volt tubes and they were all noisier. So back to the 12 volts I went and never a problem as long as the triode were closely matched. I have plenty of pairs of NOS 12 volt tubes that play brilliantly in other gear that won’t work well in the BHK as it is the quirkiest piece of gear I have ever owned in over 50 years when it comes to tubes. I’ve got pairs of NOS tubes that are and have been fine in tube based DACs and phono stages, which should be more critical, that won’t work in the BHK.

Your last paragraph sums it up in my opinion.

Kevin Deal at Upscale audio thought so much of the Tungsram tubes 7dj8 that he included them with all preamps he sold. read my comments above. my 2 day experience with an expensive set of 6dj8’s was not good and they went back to Brent Jesse.

It may be that most of the issues we are all having here are from running NOS tubes that are not 12 volts.
With regards to keeping the unit? DO IT, DO IT, DO IT. it is a great sounding unit with great functionality. Since mine went back to PS I have been using the DSD DAC as the preamp, and it really sounds good. But, there really is no comparison in that the preamp adds so much beauty and richness to the sound that i could not really ever choose to not have it. There are some really fine units on the market, but almost any unit that will sound as good will be more expensive and not have the value of “made in the USA” and the support of a great CS dept.

So my Preamp just developed the dreaded scratchy noise in the left channel. Of course I have been running Amperex 7308 and Tungsram 7DJ8 both platinum grade and cryo from Upscale. Changing back to the stock tubes does fix the issue.

I did put in a service request but haven’t heard back at this time.

My unit has 10 days left on warranty and I’m wondering if my best bet is to only use 12v tubes from here on out and not bothering to send the unit in.

This condition is generally the result of mismatched tubes.

Yeah, there isn’t a whole lot our team is able to do. A lot of times when people send their pres in with the 7DJ8s, it measures terribly on the AP. I’d either stick with the 12AU7s or try out a new set of 7DJ8s.

hi, if going back to stock fixes the issue then it is the tubes. did you swap them from left to right to see what happened. also if you have a set of headphones, test with those and see what happens just to make sure it is not the amp

I tested both pairs of the Tungsram and Amperex. The noise is always the left channel with all 4 tubes: I also swapped the outputs to the amps and the problem moved to the other amp, eliminating the cables and amps as culprit.
I purchased the Tungsrams after reading the statements from BHK. I’ve only used matched high grade tubes in the unit as I’ve heard others have had problems with mismatched tubes.
I’m not understanding how it’s the tubes when 4 units all have the same result. If the BHK just really needs the 12au7 then I will save money/time and only utilize them.
Cheers,
Gregory

Just for grins try pulling and reseating the two small daughter cards behind the tubes. One of them could have an pin that’s not making good contact. You can also swap them side for side if you want to see if the noise goes away or follows the card swap. I was having a noise using 6v tubes only and then it started with the 12v tubes too. Reseating the cards fixed it. 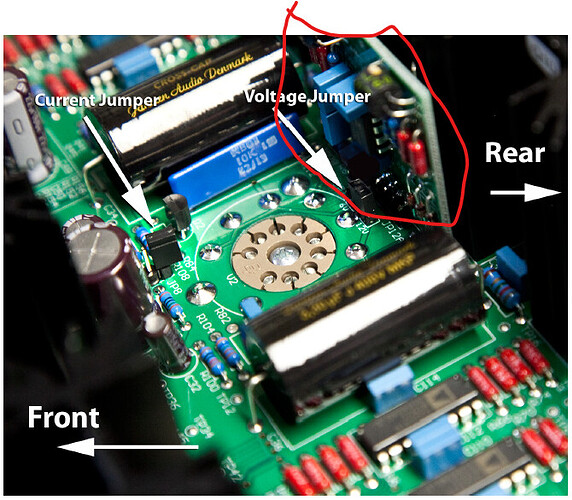 my understanding is that newer units do not allow us to pull those cards out. caution is in order here

that is so puzzling. when i had problems, it made no difference if it was stock tubes or NOS. they all did it. just make sure to change the jumpers when you switch between different types of tubes

I think a big part of this could be that folks automatically assume that NOS tubes are better. And considering their age, I would guess that quality is very inconsistent. Just my guess.

Agreed. The 12AU7s that are in there as stock are actually great tubes. Are there better ones out there? Sure (it’s so subjective though). But I do like to inform folks that the stock tubes are fantastic.

Never had an issue with the stock tubes in my BHK 250, BHK Preamp and/or BHK 300s. Can’t say that about the NOS tubes I tried.

Hold on. What does the manual say is appropriate to use? Here is what I found in the on line manual:

“A unique self biasing constant current source and user selectable switch combination allows those who like to roll their own tube selections to place any acceptable 6, 7 or 12 series vacuum tubes inside the preamp.”

It seems to me that the preamp is likely to have a problem sooner or later when customers use 6 or 7 series tubes. Wouldn’t it be smart to change the manual and, in production, eliminate the voltage switch, so people only use the “acceptable” 12 series tubes? It would seem to be an act of negligence to not do so.

Mine was built in 2019 and does have plug in boards. If they are soldered in place then they would not be easily interchangeable. They required very little force to remove and replace.

Right. not sure when but they did change to permanent boards, or at least that was what i was told.
the problem i had was on the left board and they were able to repair it fine. no more problems at this point, even using NOS tubes.