I made a mistake

Hi everyone, it looks like I’ve made a mistake. I have a McIntosh MX 123 AV preprocessor which has 3 zones available for audio output. I use zone 1 for my living room, zone 2 for my lounge, and split the zone 3 output to 2 different pairs of outdoor speakers. Zones 1 & 2 are powered by McIntosh amps, but in order to have Wi-Fi and app based control over the outdoor speakers, I was advised to purchase 2 Sonos power amps. The intention was to have the ability to have a continuous, multi zone signal (music) as you walked throughout the house and back yard. Unfortunately, even though I’m running a direct analog signal through RCA to the Sonos amps, they have a really long processing delay. There appears to be no way around this issue that I’ve been able to find, so it seems I’ll have to find a different equipment option. What would you recommend for power amps that will pass through the analog signal without delay, and allow me app based control over the 2 different sets of zone 3 speakers independently for on/off and volume control?

Roon would be a possible software solution, but not sure the OP delay problem would be solved.

To the OP, do you envision scenarios in which you’ll be playing different music in those zones. Like would you ever be playing something outdoors that is different then the living room/ den? Additionally what is the source you are using feeding the Mac?

It’s unlikely that I would be playing different sources to zones 2 and 3. The 2 different speaker pairs running on zone 3 are tied to one another as they are coming off of the same zone 3 preout, and zone 2 is separated from one of the zone 3 speaker pairs by only a few feet as they are essentially just separated by a sliding glass door. Consequently zones 2 & 3 have to be perfectly time aligned. My sources are a Bluesound Node streamer running to a PS Audio DirectStream DAC, which then outputs analog to my prepro via XLR.

Roon isn’t going to be any faster than Sonos in passing the audio. I have both and each has its own quirky delay issues. You’re always going to have some of this with digital streaming. I can’t speak to Bluesound here, but as I recall, it was no more robust than Sonos. AirPlay is even worse. I’m not sure exactly what you’re no trying to do; you’re feeding analog audio into a Sonos:Amp? A better solution would be to have a Sonos:Port feed INTO the McIntosh and then group the Amps along with that with no analog feed into the Sonos:Amps. That way all your synchronization is being handled by the Sonos. It will feed the audio into the McIntosh which will play in the two zones and the Amp will play the speakers directly.

If this is unclear, I can draw out a functional diagram when I get back to my desk.

Hi Mike, I’m not using the Sonos Amps for any streaming, I’m just using them as stereo power amps, but they were selected specifically because via Wi-Fi, they have app based control over volume for each of the stereo pairs that they power. The problem is that the analog inputs on this Sonos amps seems to then run through a analog to digital converter, then has a processing delay during which multiple Sonos products in the network can be synched, before that signal is then sent through the internal DAC and then output. The bluesound node is the network streamer in that system, upstream of the prepro which is sending out analog signals to all the zones,
What it appears I really need is a power amp that pushes the analog signal straight through, without ADC >dsp>DAC processing and delays, but still has a volume control available via an app so that I can control volume from outdoors. Does that make sense? Is there such a thing?

The only way to fix this is to use a regular power amp and wired speakers in Zone 3, or use a Sonus speaker wireless speaker set p in Zone 2.

The delay is due to the wireless connection to the speakers in Zone 3. The McIntosh sends an analog signal to the Sonus, which converts it to a digital wireless signal which then gets sent to the speakers (via Bluetooth) and then gets converted back and amplified before getting to the speaker.

If you want App based control you need to get a system like Control 4 or Crestron to do that. You will still need to install wired speakers in Zone 3.

My speakers in zone 3 are wired directly to the Sonos amps, so they are not running through Wi-Fi. I will look into Control 4 and Crestron.

I guess that’s part of my frustration. Everything is hard wired. I just need a standard 2 channel power amp that has volume functionality via my phone.

McIntosh makes an amplifier, the MI254, that appears to have the features you need. One pair of outputs can be fed to 2 pairs of speakers using the BUS input feature.

Okay. So, this is my understanding of the setup. Sonos will never maintain perfect sync with the wired rooms because it has to do an A:D conversion and tie the playin audio using it’s mechanism for group play in Sonos.

What I THINK you could do since you’re feeding it with a Bluesound Node is to replace the two Sonos AMPs with Bluesound Power:Nodes and not link zone 3 to the McIntosh processor and let the Power:Nodes sync with the host Node by itself. Power anode is Bluesound’s powered amp. The three Bluesound components should be able to stay in group play sync and since the original Node plays into the McIntosh, will experience no timing loss since it’s all staying in the analog domain for the input into the McIntosh and digital for syncing.

You can save a bit of money by getting your powernodes refurbished from The Audio Factory. Try the code “FIRST15” for 15% off.

You probably don’t need the latest Power:Node since you’re mostly just using it for volume control.

The PowerNode2 is $399 and doesn’t have all the bells and whistles of the new models, but will suit your needs for just synced volume control with your wired speakers and the existing Bluesound setup. But if you can return the Sonos Amps, you can probably end up cheaper than the Crestron option.

I’m not an expert so others can critique my solution, but I’m reasonably sure this will work and meet your needs. 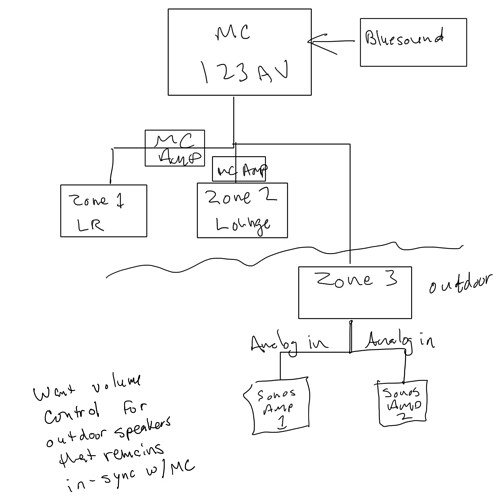 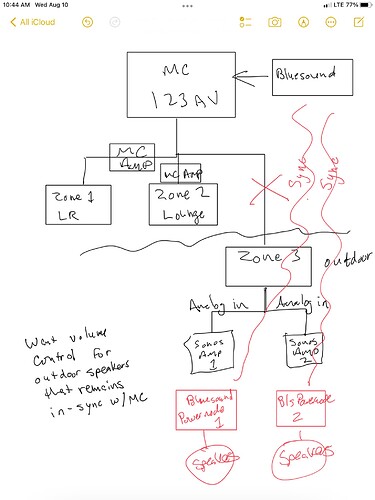 THIS!! This is the solution I was looking for! I think you might be right. At least it sounds right to me. Thank you!

Like I say, I’m not an expert, but this feels like it will keep your audio in sync because nothing is being converted. Pretty sure you can return the PowerNodes if they don’t work.

Good luck. I hope you get a working solution.