Which TT cartridge would you choose?

Pictured below are the specs for two cartridges. Which would you choose (and why) for a ClearAudio Concept Wood TT + Satisfy tone arm + EAR 834P stage? Price for first is $1400 and the second is $3300. Deliberately not telling you the brand and model. Current cart is a clear audio concept v2.

I’m not an expert in analog (or anything else really) so your rationale would be educational. 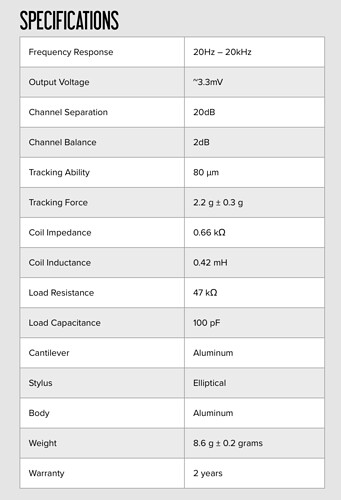 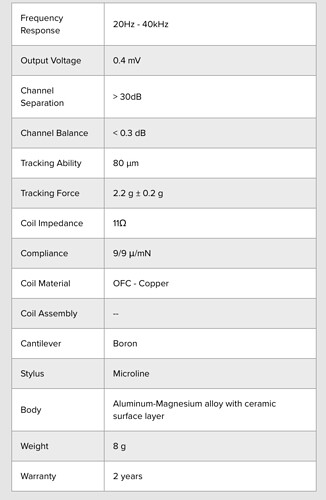 I personally love my Aphelion2 from Rega with a Rega TT since it uses a 3-point mounting scheme which makes installation much easier.

Thanks. Is there any way to test out a cartridge before buying?

I also prefer the seconnd one. My reason is the stylus, the microline picks up amazing detail over the elliptical. Mine is a Rega Apheeta 3 giving me the best sound to date for my vinyl. Enjoy the music.

The key with a microline or shibata stylus is dialing in the SRA. Both can be rather finicky. Having a tonearm that provides for on the fly height adjustment can be beneficial with either stylus type. Personally when selecting a phono cartridge I’d work with your local dealer. Specifications alone don’t tell the whole sonic story IME. Best of luck with your decision.

Were this my system, the decision wouldn’t be driven only by the cartridge spec sheets. Why? Because you are using the EAR 834P phono stage. In MC mode, that phono stage is fixed input impedance. I’m betting from the coil impedance the 0.4 mV cart is a moving-coil and for me mating a MC with a fixed impedance phono stage isn’t particularly appealing. IMHO, the ability to experiment with load impedance when using a MC cart is mandatory. I might be an outlier here, but I have zero problem with an elliptical stylus and have very happily used MMs with an elliptical in the past. Sumiko, interestingly enough, has long made the argument an elliptical stylus is very easy to align. In short, I have always believed the 834P is best suited for MMs and I encourage you not to be influenced one way or the other by any of us attempting to make the call based only on cartridge spec sheets. The choice is driven as much by the electronics you are using with the cartridge.

If looking primarily at specs, the first one’s stated channel separation appears quite low, but the real way to tell is to hear the cartridges in your system which today is harder to do.

Well said, it is a matter of optimizing the cartridge with the phono stage and the tonearm. While not a fan of Sumiko cartridges in general, having had a BPS and heard the EVO, there is nothing wrong with trying an elliptical MM cartridge.
To the original posters question, on paper the second cartridge could be the better choice, but system integration is critical.

Thanks, yeah. I’ve reached out to a local dealer to see what he says.

Interesting. That’s helpful. What does channel separation mean here and how much does one look for?

using the EAR 834P phono stage. In MC mode, that phono stage is fixed input impedance. I’m betting from the coil impedance the 0.4 mV cart is a moving-coil and for me mating a MC with a fixed impedance phono stage isn’t particularly appealing

Fair enough. What kind of phono stage would you suggest with my TT? And yes, both the cartridges are MC.

For stereo replay in particular, channel separation is a measure of how well isolated the signal in one channel is from the other. Ideally there should be zero cross-talk between the two channels, in reality there is. That datum is a measure in dB of how well the channels are isolated and the higher it is, presumably the better. The tricky bit is that number is typically only a lower bound and it varies from sample to sample. The other tricky bit is it is frequency dependent and practically nobody quotes it at the reference frequency it is measured at, if at all, at the factory. When I’m shopping for a cartridge, I don’t put a lot of emphasis on the separation spec relative to output level, internal impedance and other more critical parameters that determine how well it will integrate with the phono stage.

https://www.sound-smith.com/articles/covid19
The founder of this company has some great and easy to understand talks regarding cartridges and their technology including the importance of channel separation, etc. His products are regarded pretty highly and reviewers seem to like them. I think it’s great you have local dealer to help out.

Looks like one is a high output MM cartridge and the other is a low output MC. As you can see on the specs, the MC gives you better frequency extension, better channel separation, and a much better contact area with the Microline stylus than the Elliptical. You will get more of what’s in the grooves with the MC.

I have been using the Benz LPS Micro Ridge cartridge for many years and it still sounds like new. It outperformed everything I tried before and sounds so much like live music, I don’t have the words to do it justice! It just gives me more of the natural live performance no digital that I have heard can equal. That said, I’m moving on. It’s been weeks and I am still waiting for my SoundSmith Hyperion MKII to arrive. I’ll see if that can improve things more even though I can’t imagine any cartridge can better my Benz.

Will check out Sound Smith.

Or you could go completely nuts and get the Soundsmith Strain Gauge setup! That looks wild with a price to match.

I don’t even know what it is, but just looking at the price I don’t need to.

Take a look at the Hana line both high and low output MC available, not too expensive and they perform great and many dealers sell them.

There are many excellent cartridges out there. They have different signatures. My audiophile friend has the ClearAudio Goldfinger Statement. Talk about detail, the Goldfinger got that in spades! I heard excellent sound notably from Lyra, Koetsu, and Air Tight is really nice. No matter which one you get, it will be a nice sweet break from the digital sound. I heard some great reactions from Hana also.

I believe on the low euro thread @shankha was looking for something European in origin?

Lots of choices out there if that restriction is lifted, especially if Japanese carts are on the table!