Re-researching my cartridge spec, it suggests a VTA of 20 degrees!! Pretty extreme. I’ve set my tone arm to that angle, and the sound is great, but now I can no longer use the TT dust cover.

My question: does 20 degrees sound reasonable? Setting VTA is not trivial on my setup; so, I can’t do A/B comparisons, but what are the audible consequences of a lower-than-recommended
VTA?

That seems wrong, unless they designed the thing to be nearly 20 degrees off from where most records are cut. Which again, sounds wrong.

What cart? If true, I’d think you would want to wedge the cart at the headshell rather than tip the whole arm. And why wouldn’t they design the headshell that way? 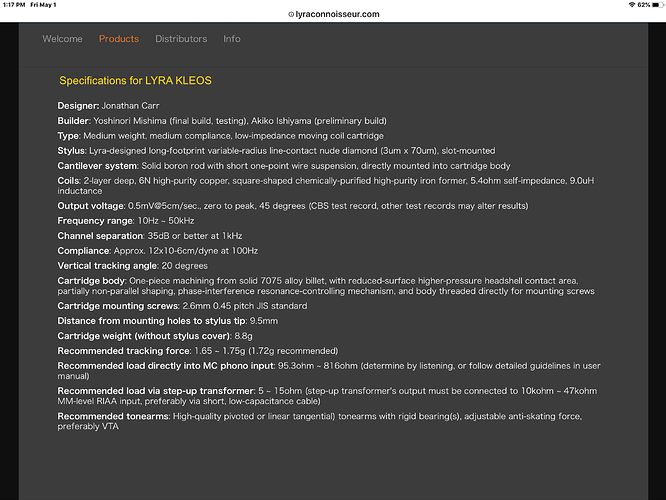 Well - my Delos says the same. But apparently that is not to suggest that the user has to adjust their arm 20 degrees. From Mikey’s review of the Delos:

“VTA is 20 degrees, which Lyra says is achieved with the arm parallel to the record surface.”

Typically you want it very close to vertical. As I recall, some suggest slightly forward of that so that with VTF applied, it goes vertical. Actually best to sort it in situ with everything as it should be, while playing a record. I’ve found a fairly high res USB microscope invaluable in that respect. You can actually SEE it.

Important quote! It’s been so long since I’ve messed with my TT setup… Should have left well enough alone.

The Lyras are very sensitive to setup In all ways. I’d go back to arm parallel to record, then experiment with going up some from there. As long as you aren’t losing bass solidity, you can often gain some top end clarity and definition.

Always remember, that the correct SRA mostly means the back of the tonearm 4-8mm up. But you can never tell without a microscope.

Van den Hul always recommended to put the back up around that value even before the SRA discussion began.

I don’t understand why this is surprising? 20 degrees VTA is pretty much standard. Its based on the cantilever being 20 degrees off of parallel to the record surface. Depending on how well the stylus is installed on the cantilever, the SRA should be ~ 92 degrees. This can be measured using a USB microscope, but is very difficult and in my experience not worth the risk or effort. My advice is set the tonearm parallel to the record surface with a 180gram record on the platter (static) and leave well enough alone, unless you have VTA on the fly.

I’m re-reading your post: “I’ve set my tonearm to that angle”. If you are saying you have your tonearm at a 20 degree angle, then that is way off. I would imagine a very harsh and treble forward sound. I can’t imagine very good tracking either. The 20 degrees in the VTA is based on the cantilever, and not the tonearm. Maybe I’m misunderstanding