As most audiophiles know, it’s not always possible to achieve good speaker placement for a variety of reasons. Often we spend amazing amounts of money on electronic components with poor results because speaker placement often takes home front negotiations.

I’ve been gradually upgrading my rig with all PSA and Audioquest products. I’m now done. Just about every addition was accompanied by incremental sound quality improvements. The only thing that left me wanting was staging. I still was not getting as much of being surrounded by the music and of accurately locating instruments in space. It was better than when I started improving but it did not feel complete.

So I got approval from the home front for the smallest audio purchase ever, totalling a mere $450.

I partly followed Paul’s advice and replaced my tall center rack between the speakers with three five-inch in height amplifier stands ($150 each) to hold the power plant, BHK 250 amplifier, DSD DAC and BHK preamp. Moving the 75-inch flat screen was not possible but the panel is just 4 inches off the wall. I don’t know about the acoustics of the glass panel but some things just have to be.

The other improvement was also imperfect but practical, and passed mustard with the spouse. The right side of my room was open to a hallway leading to the back of the condo, greatly increasing the distance between the right speaker and the right wall. Building a wall was out of the question so I looked for a room divider to separate the hall from the listening area. It was a $150 expense.

I don’t know enough about acoustics to evaluate how a divider with small spaces made out of softwood impacts sound. It’s logical to assume that some reflection takes place and the move allowed me to have the speakers equidistant from the side walls.

These were imperfect tweaks but the improvement in staging was well worth it. Now I have a stage that is wide, deep and tall. It may not be all that it could be, but it’s brought out the potential of the PSA gear to an extent I did not think possible.

I hope relating my experience may help forum members. I also invite ideas for further improvements. Many thanks to Paul for his insistence that clearing as much as possible the area between the speakers would have a positive impact. And thanks for the video itself. Watching Paul’s video softened up my spouse to the idea of yet another audio tweak. In this household, what he says carries a lot of weight. 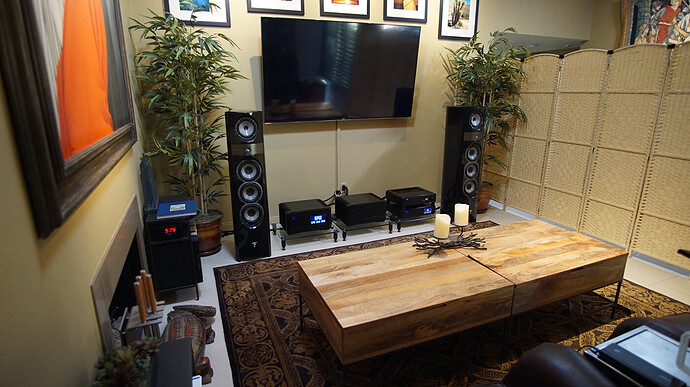 I would be careful with assuming that the room divider acts as a wall. I have a “corner” that is created by a three-sided fireplace that doesn’t really behave accoustically as a true corner might (it doesn’t go all the way up to the ceiling, etc), so need to be careful with it a bit. Food for thought!

You might consider accoustic panels on the first reflection points along the room divider. Doesn’t have to be expensive if you get creative. You already know that

Moving the 75-inch flat screen was not possible but the panel is just 4 inches off the wall. I don’t know about the acoustics of the glass panel but some things just have to be.

Find a nice, inoffensive throw blanket with a bit of plushness and keep it handy for when you want to do some serious listening.

When the mood strikes you, drape it over the TV screen. It makes a subtle but noticeable (positive) difference in my system.

Nice room/kit, by the way.

Concur with that advice. It opens soundstage forward and back at eliminates what ted Smith termed a glassy sound.

Very nice well thought out room. Looks very inviting and relaxing. I had a room like that once where one side was open. Bass trapping the the corner made a big difference in balancing the soundstage. It mimics the open side by trapping the bass loading the corner. I had one from ASC, but lots of options out there. If you are handy, DIY is also an option. Lots of good info online. Room acoustics is like another hobby.

Have fun and nice work!

Try removing the table and see if that helps any with your systems imaging capabilities. You might try pulling the speakers a bit more forward also with a slight toe in towards the listening position…

Thank you all for your suggestions. Some would be difficult to implement for aesthetics reasons and the need to keep the home front supportive. However, I will be trying out others and will report on their effectiveness. I appreciate everyone’s help.