I sense that there is a level that’s reached on the audiophile journey (given the audiophile can afford it) where things just get arbitrary. It’s like connoisseur-level wine tasting then, there’s no hints of bad flavour (mostly) anymore and you can switch endlessly with all the lateral choices in the world and what has become the governing factor is now one’s personal fine palate - a palate for almost exclusively pleasant flavours, no, exclusively superlatively pleasant flavours…
I’d think this level can lead to either lasting satisfaction or becoming bored and/or chasing after more novelty (with equipment and tweaks)
With careful choices and with a personality that allows it, one can find that the nearly limitless novelty is more in the recordings. The sound reproduction just has to differentiate them in all aspects. I totally believe people who say there are multitudes of six figure systems that for example have such compromised tonal nuance that everything almost sounds the same, with special effects (so to speak)

I don’t even think “connoisseur-level wine tasting” in audio is even fully possible in terms of the music itself until the system as a whole has been carefully and tastefully evaluated and brought together to allow it. Just how I’ve come to understand it…

Very well said, Arenith. I know personally more than one audiophile who’ve achieved systems that are good enough to where, anything beyond it is really just change for changes sake. And yet, change they do. I’ve heard many iterations of these changes over the years. Is each one an advancement on what we’re already excellent systems? IMO it’s more along what you said - lateral changes for change’s sake. It always makes me wonder if there are any folks who’ve gotten to that level, who then shift their priorities to buying and listening to more music? I sometimes wonder if music is just an excuse for a hobby full of equipment lovers.

Warning: I have no data to back this opinion up

I have an old friend who owns an excellent wine shop, whenever I am having dinner with him, or hanging out with him at his shop, I am always amazed by the level of detail he can extract with his tongue… hmmm… that definitely doesn’t sound right… what I mean is, he can taste more than I can. He always knows exactly what it is I like about certain wines and knows that if I try a different one with a certain profile, I will find this or that. It certainly must be some sort of genetic difference between the two of us, I simply can’t describe what I taste and I don’t think I get quite the detail he does.

I wonder if there is something similar that can happen with ears - genetic differences, ear development at birth, damaged ears vs healthy ones, etc.?

Personally, I have a “genetic” disadvantage of having a budget defined system

Having been in this hobby and a music lover for 45 years, the following:

1 - Yes, I have reached a point where I am highly satisfied with my equipment
2 - I always keep my ears and eyes open for something better
3 - Higher cost does nor higher definition does not always lead to more musical enjoyment
4 - Sometimes higher definition can lead to less musical enjoyment especially with poor recordings
5 - Tubes are the most musical of technologies (most of the time)
6 - At my age, I am tiring of the ultra-detailed language of this hobby. I don’t really care anymore that you taste late-season blackberry in those NOS tubes
7 - The true fact that I can hear a slightly different timbre of a guitar in an old well known recording with that new tube or cable… is well I really don’t care anymore.
8 - My priority is and has always been an emotional connection with music, everything else is falling away as I age
9 - Connoisseur sound tasting has started to bore me for some time now.
10 - I love YouTube for music

It certainly must be some sort of genetic difference between the two of us, I simply can’t describe what I taste and I don’t think I get quite the detail he does.

A delightful read that explores exactly this topic in some depth. Entertaining, as well. 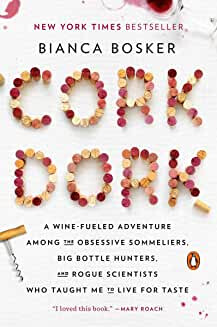 Oh nice! Will have to go grab a copy of that

6 - At my age, I am tiring of the ultra-detailed language of this hobby. I don’t really care anymore that you taste late-season blackberry in those NOS tubes
7 - The true fact that I can hear a slightly different timbre of a guitar in an old well known recording with that new tube or cable… is well I really don’t care anymore.
8 - My priority is and has always been an emotional connection with music, everything else is falling away as I age
9 - Connoisseur sound tasting has started to bore me for some time now.

I’ve yet to meet a hifi enthusiast that says that they’re not entirely happy with their system (probably an alcoholic is happy with any bottle of Vodka).

Should there be Sommeliers for audio with the ability to blindly hear equipment?

It would be great to have Sommelier equivalents but most will be salesmen or people that think they’ve higher powers than they actually have. Let’s face it, most equipment is hampered by the room (I’ve never understood the lack of interest in room treatment, especially bass traps, especially here in the UK - mind you most houses/rooms are small and there’s always the wife factor, I’m lucky she puts up with my hifi and my cars!).

I’m lucky she puts up with my hifi

Could someone with good skills in analyzing aspects of gender difference please contribute to explaining this extremely commonly mentioned “WAF”?
Most women are not interior designers by trade, most women (and people in general) are not OCD or autistic or with some diagnosis that would explain such anxiety from something being in the room that they perceive isn’t integral to the space’s comfiness (here, excluding auditory comfiness) or necessary functionality. If excessive living space isn’t taken by the hifi rig and the speakers and components aren’t simply ugly, what gives? Why would the system intrusively invade the other occupant’s personal space so much they’d need to complain or even disallow it?
If it’s constant high SPL and with music the other occupant doesn’t especially like, I understand - I’d be bothered too. Let’s just talk about the equipment being there.

I have two good friends who significantly limit the results they get from good equipment using WAF as an explanation (as I said, unfortunately in the UK our houses are small so space really is at a premium and it’s very rare to have a large dedicated room). I extended my house to get a 30’ by 20’ hifi room (it’s actually the lounge but is big enough to get big bass traps and other room treatment in without filling the room, I was lucky to have the funds to do it and a wide enough house).

One of these friends has top-end Naim500 stuff (lots of boxes and lots of power supplies and lots of cables) with B&W 802D3s. The room isn’t large and the bass build up horrifically at around 30hz. He likes the heft but the bass colours everything else. His dealer just tells him how wonderful it sounds. The other friend has ML SL3s with Moon gear in a small room. He too has a single prominent resonance but uses WAF as the reason not to put a 4" thick panel on a wall.

When I built my room I couldn’t get my old gear to sound good so completely replaced it (just like my old room I incorporated lots of acoustic treatment and have the means to compensate for changes to frequency response). However, I still had a huge bass suckout in the seating position. I got an acoustic engineer in to take measurements and he recommended four huge RPG bass traps. They certainly helped even out the bass (however I still have the suckout). By chance I’ve had two prominent experts hear my system, one said ‘what a great system’, the other said ‘you should be very proud of what you’ve achieved’ (regarding the acoustic engineer I’d used, he knows him and said that in his opinion he’s useless!).

You can tell I have strong opinions on things, but I also have lots of experience in using multiamped and both analogue and digital crossovers, I have ‘a thing’ about active operation.