My review of the new P15 power regenerator

Lots of two channel guys with Power Plants. My guess is that most Power Plants are used in two channel systems. I go back to the P300. Still saving up for a P20 to replace my P10 (which will go into my second system). Digital equipment is generally noisy by itself. Noise and power distortion can come from lots of different sources (e.g., refrigerator motors on the same circuit, air conditioners, light dimmers, etc.). Power qualify itself can be quite variable from location to location and at different times of the day. If you haven’t tried a regenerator in your system you should. You’re likely to be surprised.

mine is a very simple 2 channel system with playback only with the DMP player. If i had gone from no power plant to the P15, i would have expected to be “blown away”. the fact that I went from the P10 and was “blown away” tells me there is a lot more here than just measuring the ins and outs of THD. The sound is just much more real and alive than before.

Agreed Kent. I guess it would be incorrect to state specs have nothing to do with musicality, but in my experience, they have very little to do with it.

I agree. the numbers are just a guideline. I sell clothing for a living and people always think that if the thread count is higher, then it is a better fabric. that is not always the case as there are other variables. For years solid state amps “measured” better than tube amps, but mostly sounded worse.

True, but an analogy which would have never occurred to me. Thanks!

After spending thousands on upgrading sources, amps, speakers etc, the biggest single improvement i have ever had was plugging everything into the P15.
Don’t care for all the numbers too much but know what my ears hear and am now a total believer that these Power Plants should be a must if you want to get the best out of your system.

Not having dedicated lines would most likely make a bigger difference than with dedicated lines.
With dedicated lines there are no lights or any other noise generating devices plugged in to that circuit. I still use a P300, with my preamp, transport, DAC, and tuner. Everything in the front end is plugged in to a Dectet and amp in to a PSA Duet.
Over the years I have come to the conclusion that everything matters in a decent audio system. From the obvious, to various tweaks. On their own they may not seem like much of an improvement, but they are cumulative. There are numerous recipes and descriptions on building room treatments. Tips for speaker placement, not everything requires a big expenditure.
And either through a known dealer, or from PSA, Music Direct, or Audio Advisor you can do an in home demo. With PSA, you can get great trade in deals, and no hassle returns.
If my finances changed there would be a P20, and a P15 on order asap.

boy do i agree. best investment you can make

hi Bruno, did you have a P10 before or did you go from no power plant to the P15?

Hi Kent, the P15 is my first power plant, just used a Dectet before.
Going from the Dectet to the P15 has gained detail and another dimension in the music, like going from 2D to 3D.
I have had many improvements in detail in my journey of uprades but adding the P15 has made me realize how critical power is to our systems.
My timing was perfect when ordering the P15 as it was not even listed at that time and thought i was ordering a P10 so glad my order was not a month earlier as i hear the P15 is quite a bit better.

my goodness you must be in audio heaven going from a Dectet to the P15. you may not sleep for a while.

i went from a P10 and i found that dramatic. PS is the best in the biz and I for one, would not own another brand unless it was just something they did not make like speaker cable.

Also just installed the P15. Love it, I can really hear the improvement in clarity, broader soundstage, more precise positioning of voices and instruments. Who would have thought that ‘clean electricity’ would make such a difference in sound. It elevated my whole mid-range system a few notches up and it sounds quite awesome now to me (BlueSound Vault, Benchmark DAC3, Benchmark Amp, awesome little KEF LS50’s with some help from an SVS Ultra sub). Hm now what do I upgrade next… 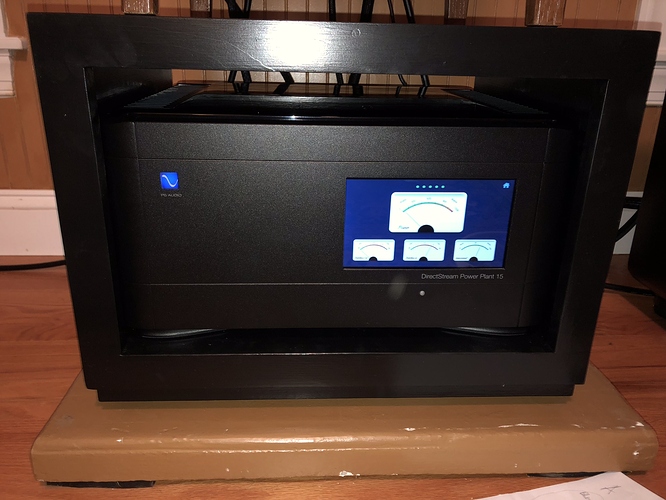 It is truly amazing how well these things work.

hi, curious. were you using a PP before or is this your first time.

First time. Had an older surge protector / conditioner before (MonsterPower HTS 2600) but this P15 is a big step up in sound.

goodness you must really be hearing your system for the first time. i went from a P10 to a P15 and i was stunned. Going from what you had to the P15 is a humongous jump in sound quality. I bet you will have this thing forever.

As I was listening to Schumann this morning and appreciating just how good my P15 is I got to thinking about my M700s, also marvellous. They are tiny compared with the mighty P15 but tiny in size only, not in power and performance. But how about this? Why not harness the D-class amp as a power regenerator, reducing size, weight and complexity (and probably price) but producing lots of pure AC power. Are you working on something like this Paul?

We’ve tried in the past without success. The problem with class D amps is they haven’t much energy storage and they struggle with peak current demands. Their forte is efficient delivery of music but when it comes to dumping 50 amps for a short period of time they cannot keep up. It’s partly because of their need for an output filter. Something like this could be done, but not with commercially available platforms. We’d have to start from scratch and that’s a HUGE project mostly because the EMI and certifications of low noise are onerous and take skills we don’t currently have on staff.

I had my P12 running now for several months. I like it only when, it outlets are let on that I use and the main power turned off. When on in either mode, sine or Multiwave the change in imaging and bloated bass and forward presentation is not natural at all… The Furman Reference 20i is as good if not better because it does not mess with the reproduction, just cuts the noise down.

I like the P12 but only when all unused outlets are shut off and the units off is used, then everything tightens up, vocals have definition and the bass now sounds more realistic and not bloated or over powering. Perhaps my front end gear is so good that the PS regenerator hinders it performance.

Like they say all power conditioners are a crap shoot. I even did the current upgrade download. Not sure I will sell it but it really does a disservice is the equipment we pay for. Messing with the power supplies of any gear that a designer, designed continues to prove to be filled with peril. Yes, it sounds different but not right, and that is the main thing.

I am sure I am not the only one who experienced this, and I know my system well and been in audio for over 35 years.

I might suggest that there’s a problem somewhere. PS Audio would be hard pressed to sell even one of these if it was a platform problem. I have the previous generation P5 and it absolutely sings, powering BHK Pre, DSD, PW Transport and a WOO WA5-LE Headphone amp. It’s effect on music is immediate and positive even when changing modes.