How odd. 48 kbps should be pretty awful - how does it sound?

How so would it be awful when that’s actually slightly higher than redbook CD at 16/44.1.

Granted, neither streamed at those bitrates never sound as good as an actual CD, but it doesn’t sound bad at all. Maybe a little less dynamic and a little narrower sound stage, but I chalk that up to it being a Roku Ultra vs Bluesound Node 2. Than again, both are being fed into the DAC in the SGCD.

You probably meant 48 kHz (sample rate) rather than kbps (bit rate). 48kHz is the standard for most video and the Roku box may be re-sampling everything to that.

Spotify only streams at 320kbps or below.

Your laptop/roku/node2 is converting Spotify’s stream to a PCM stream for output, and that is what your gear is reading. For example, if you are using a Windows laptop and you go to the sound option settings, you can set bitrate and sample rate for how windows will output (this is how Windows must output audio with programs that do not support ASIO, WASAPI, etc.)

See attached image… if I were to change the setting to 24bit 192Khz, the GCD would read “192.” But know that is not actually “hi res” nor “cd quality” as windows is just upsampling the stream it is getting from Spotify, which is indeed a 320kbps Ogg stream.

The Roku probably converts the stream to 48khz, as the old Apple Airports did the same thing with their optical outputs.

From the research I’ve done, a Spotify stream’s native sample rate is 44.1, so unless you want your computer upsampling, you should set it to 44.1. 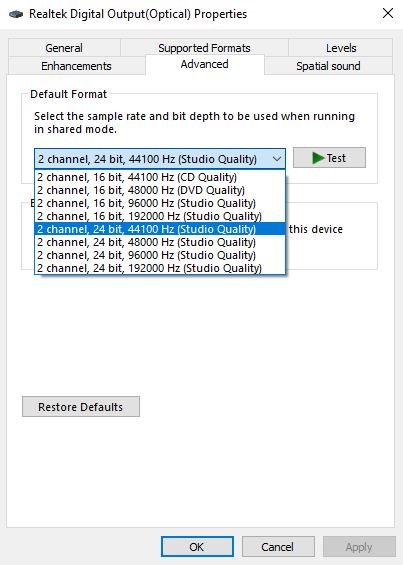 Spotify can stream a Sample Rate of 44.1khz/16 bit up to a Bit Rate of 320Kbps for their top tier subscription. Is how I understand it. Whereas the competitors can Bit Rate to 1.4mbps with sample rates higher than 44.1 and higher than 16 bit.

For my desktop system, I have Logitech Media Server running on my PC. It reports the bit rate of whatever stream it’s playing. It frequently, but not always, reports 1441kbps (CD quality) CBR (continuous bit rate). Sometimes it’s half that, and sometimes lower than that. It’s surprising and I’m not sure what to make of it.

Is setting it to 24bit, 44.1k the proper setting we should use? Will selecting 24bit, 192k hurt the quality? I have my PC connected via USB to the DS Jr. and stream Spotify Premium exclusively.

This is where my knowledge somewhat stops. I have heard on the interwebs that going to 24-bit does not effect the actual digital file in that Windows/Mac just adds zeroes onto the end of the file itself and uses those extra bits for volume control (instead of changing the bits of the music itself).

In terms of “upsampling” to 192k, you are allowing Windows to upsample the sample rate. Some people say Windows doesn’t do a good job of upsampling compared to an audio manufacturer who specializes in that and does it in their hardware (or software for that matter i.e. roon), some say it doesn’t matter and Windows does a fine job.

IMO, I don’t hear a difference either way

Just had a thought, if you do happen to play a high res file, 24bit/96k for example, and the software you are using does not use something like ASIO or WASAPI to take full control of your PC’s audio, it will be converted to whatever you set in those settings.

So if you have it on 16/44, your high res file is being downsampled before it even leaves your computer… again, that is IF your software doesn’t control the audio and you are letting the default Windows systems control it.

I have my PC connected via USB to the DS Jr. and stream Spotify Premium exclusively.

Why involve the computer at all?

Oh because that’s how I have my listening space setup. I use my PC to listen to music, watch movies, and for video games where all of the audio go through the PS Audio equipment