I used to have a 5 ch music only system (not home theater with surround processor etc) with 5ch DAC, 5ch SACD player, a Parasound P7 5ch pre and Parasound A52+ 5ch amp.

It’s been disassembled for the last number of years and have listened to only a 2ch setup with a Pass XP 30 pre and BHK 300 monos.

I’d like to reconnect my 5ch system on top of the current 2ch setup. One requirement: I want my stereo signal path to not have any additional electronics in it.

How do I connect all this?

Connecting two amps to the same speaker is a no-no and can damage either amp. You would need a speaker switch at minimum. However, a better way would be to use your 2-channel setup as-is and run your 5-channel LF and RF pre outs into one of the Pass inputs setting its level to track the volume of the other channels. You would then use the 5-channel preamp to control the volume. This is what I do with my SGCD and AVM 60.

My Pass pre does have a “Pass Thru” input, would that help? I can’t figure out exactly what it’s for.

My Parasound 5ch pre has a home theater bypass which I also don’t know how to use.

So could the two features help in integrating two separate systems?

I have a 2ch and 7ch HT system from a BHK250. The key is the BHK pre with HT mode on channel 5. My streamer connects to Ch 1. Mains powered by BHK250, others powered by Emotiva

So your BHK pre when switched top input 1 sends the signal from router streamer to your BHK 250 which derives your left and right speakers.

Bit I don’t understand how the HT part is connected to the BHK pre. And what the outputs of the pre are connected to.

Also how do you manage the volume control between the different amps?

(A sketch of off the signal path would help.)

Yes, that is precisely what the Pass-Thru is for. It bypasses the volume control in your Pass Pre so that you can control everything from the Surround Processor. You would not use the HT Bypass in your Parasound for stereo music listening as you only want the signal to go through the Pass Pre to your BHKs.

Once you have the Line Out to the Pre you’ll be powering the L&R via Pre to Amp. The rest of your speakers will be powered from your HT system.

@vkennedy61 thanks. But, my multi ch pre doesn’t have a line out. It does have a tape out but it downmixes all the other channels on it. That’s not going to work.

I’ve updated my original post to include two new pieces of info. Does any of this help?

I guess I could use the home theater bypass on the 5ch pre and connect the pass pre on its inputs. But that’s more electronics in the 2ch setup which I want to avoid.

When you want to listen to multi channel you use your Parasound for volume control and choose the bypas input on your Pass preamp.

When you want to listen to 2 channel you only use the Pass preamp.

When is what was mentioned above, but with more detail.

I don’t quite understand. You’re saying run the normal 2-ch source to the left and right of the parasound 5-ch pre and then the L&R from the parasound into the 2-ch Pass pre’s “pass thru” input?

And if so, how do you do the volume control when listening to multi ch? You have to match both the preamps, right? How?

BTW I upgraded my original post with this info:

It would be helpful to know the make and model of both the 5ch and Pre.

And for obvious reasons, I’d like to keep the 2-ch signal path free of extra electronics off at all possible.

Here’s the back of both: 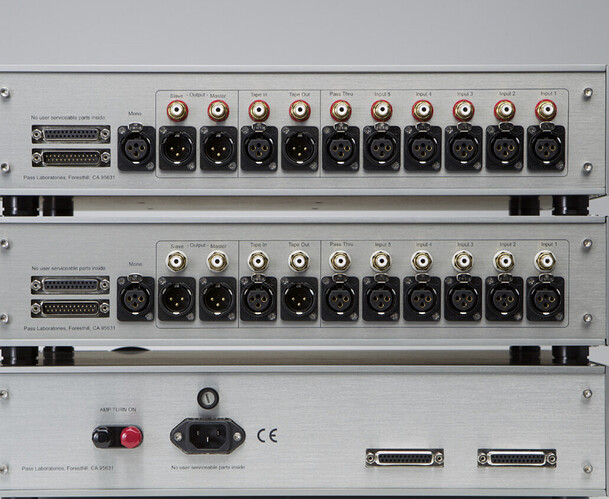 Cool thanks. Will try it out.

I bet he can look in his owner’s manual and it will tell him how to configure his Pass preamp for pass thru.

Yes thank you. I couldn’t understand the pass manual before and what it was trying to say. But now that you guys have explained it, I understand the manual now

I am not sure what the 5 channel source it. Unused the P7 as the 2ch pre and that 5.1 input on the back needs a 5 channel source. I am not sure how having 2 pre amps gives 5.1. I believe the P7 vol only controls 2.1 system and when you hit bypass it becomes a 5.1 switcher and pass through only. it let’s you use same amp for L+R as well as feed to sub. But you still need something feeding it a 5.1 signal. Can be Blu-ray player or in my case it was an Anthem AVM60. I have upgraded to AVM70 and BHK pre with JL CR-1. But concept is same.

I may have missed something but if you have a 5.1 source and Pass has 2 ch bypass you don’t need the Parasound. The Parasound does have 5.1 outputs. Main outputs they are labeled. When you use a 2 channel input on the P7 it only outputs 2.1. When you hit one of the two 5.1 inputs if I recall you can set up it for bypass. There were a few things you could setup with bypass. I forget exactly what. It does work very well for that.

I am not sure what the 5 channel source it

I believe the P7 vol only controls 2.1

Nope. It controls all channels volume.

Hopefully that answers some questions

ok, there you go. you should just be able to put those in the two inputs and send the outputs to your amps. select that input and if it controls all 5 channels. You would want the vol on P7 to control volume so set the two sources to fixed. Bit different from having a HT processor where you want P7 to be passthrough. If I recall there is an option to swap from bypass to not bypass. Its been a while.