Same here, although the measurement people probably love it more

@IanO Did you have a chance to try the PSA DAC in combo with the M Scaler? If so, how did it sound?

No, we didn’t try that. However the Audio Bacon website review of the M Scaler has. You are limited to 176 into the DirectStream over SPDIF I believe. The M Scaler can send up to 384 kHz over one BNC and 768 over the twin BNCs. I don’t think the DirectStream accepts more than 176 kHz over RCA though?

So, you are getting a quarter of the M Scalers capability. However the Audio Bacon review was very complimentary of the pairing.

On the day to remain consistent we used a dcs Bridge with SPDIF out over BNC or RCA (can’t remember) as the input to all the DACs apart from the Bartok which effectively has the dcs Bridge built in.

I did have a PS Audio Bridge II card in the DirectStream and have tried both Ethernet and USB from the Zenith. I found USB superior but always used a DDC to convert USB to I2S. My history of DDCs was:

Before buying the Zenith I had a homemade Roon ROCK setup and placed an ISO REGEN before the Matrix. It made a noticeable and beneficial difference. I think Intel NUCs have quite noisy USB ports.

However between the Zenith and the M Scaler it was very detrimental and flattened the sound and any 3D effect. However I assume the M Scaler is implicitly re-clocking by effectively multiplying everything by up to 16.

Probably wandered a bit off topic but worth knowing if you’re considering an M Scaler. 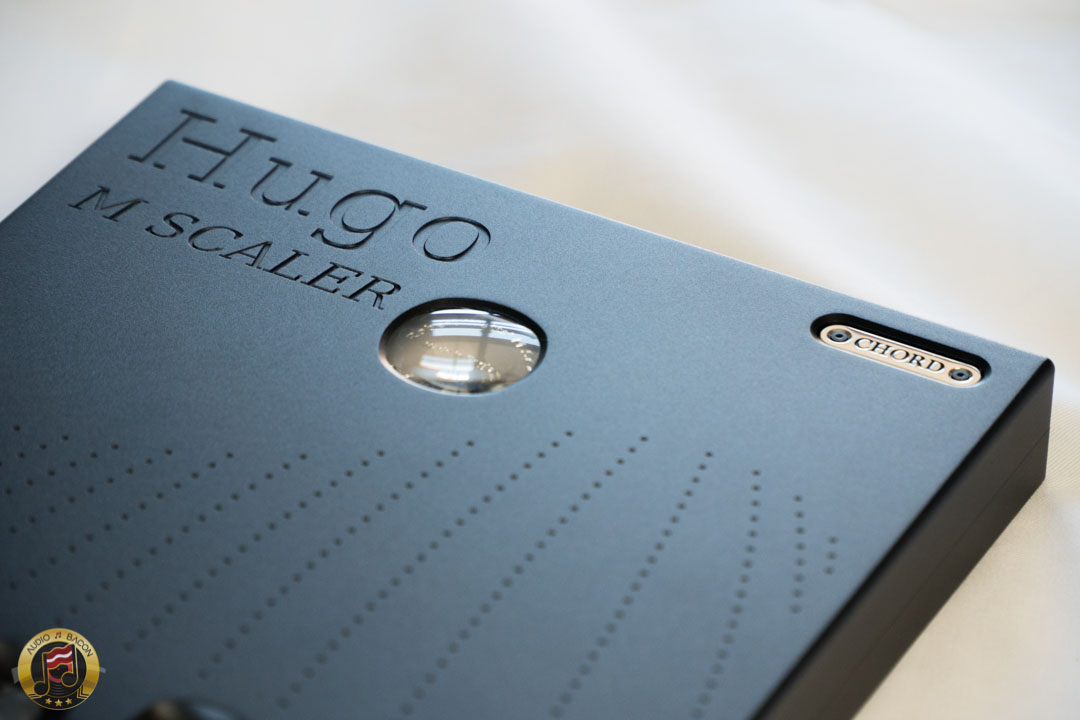 Review of the Chord Electronics Hugo M Scaler. Finally, audiophiles could enjoy analog sound from their digital music with this advanced upscaler.

With the intention of fixing a problem I was hearing in the highs: some annoying edge in the upper mid highs (like an high pitch distortion) that had been bothering me for at least a year, I personally borrowed the Hugo TT2 (without the M Scaler) from my dealer along with Harbeth SHL5+ to determine if the problem was caused by the PS Audio DSD Sr. DAC or my Spendor D7 speakers.

After different listening sessions, I concluded that my Spendor D7 still gave the sound I preferred the best (as my wife would put it, Spendor were more like concert version while Harbeth were more like studio version).

As for the DACs, I thought that the Hugo TT2 (no M Scaler) was pretty good, and in some aspects better than the DSD Sr: similar image size but with a more accurate positioning of each musicians, quite organic, neutral, good bass, sweet highs, but a bit too polite.
The TT2 did not seem to be able to convey the emotions like the DSD Sr can, which is strange: if the TT2 has these amazing number of taps filters that could essentially reproduce accurately the original recorded signal, then why can’t it convey the emotion as well?
There has to be something else than just recovering the original signal, but I do not know what: the output filter, the analog section?
I don’t have the expertise to explain that one.

Anyway, the DSD Sr. will stay, but beware of the TT2: Chord is closing-in

May be the next mountain top firmware will be able to create some more distance (I currently use Snowmass 3.0.6).

As for the annoying edge in the upper mid highs, I eventually tried some Audience XLR cable for the audio output of the DSD Sr. DAC to my integrated amplifier and it is finally gone: it would seem that all I needed was a high quality XLR cable to eliminate unwanted noise entering the audio link (I suspect may be some HF noise generated by the DSD Sr. but I cannot confirm it).

I can believe the M Scaler makes it sound better (700khz and you are getting pretty close to DSD upsampling bandwidth), and maybe the TT2 upgrade, but the Hugo 2 just sounded harsh and not that enjoyable in spite of its apparent better performance. I ended up selling it.

Hi @B.Gelinas, would you mind telling me what Audience XLRs you went with? Thanks.

I bought them from my dealer at 25% as part of his inventory sale.
I believe these are older Audience XLR models.
The newer models are better and a bit more expensive.
But, I do not care to have a newer model as this one meets my need: no more annoying edge in the upper mid highs !!!

In retrospect, I feel somewhat stupid I failed to replace my DAC->AMP XLR connections: I had already replaced my USB cable and my speaker cables by higher quality Audience cables (my dealer favors those because he says his customers give those cables the best positive feedback), but I never thought of replacing the XLR cable because by design, these cables are supposed to subtract the noise on the wires.

Well, little did I know : I guess the XLR cable principle does not remove all noise.

Or may be, as I suspect, the noise was HF emitted by the DSD Sr. screen (Ted once said to those people who can adjust music tonality by changing the screen intensity that it could be due to HF noise emitted by the screen generator).

If that is the case, may be the HF noise was running on the outskirt of my old XLR cable (Wireworld Eclypse 7) that may have had inferior cable shielding potentially allowing HF noise to enter the audio link via the XLR connectors on my integrated amplifier ??

All I know is that the Audience AU24E fixed that problem instantly.

The noise will be coming through the dac from your source, not generated by it. A matrix with lps1.2 power supply will make a massive improvement here.

Can hear background buzz with the DS screen on my setup, a 300B SET feeding 94dB Horns.
Even with my BHK pre, the buzz is there when it’s volume display is on.

Would be borderline unusable in my case if I couldn’t kill the displays!
Appreciate a high efficiency speaker setup can exacerbate the noise coming from the display, so not a dealbreaker, but hopefully in future Firmware releases display noise can be addressed.

It IS a thing, but a moot point given the display can be switched off.

Odd, I’ve never heard a buzz from mine, but to be fair I do have my display switched off for other sonic reasons.

Thanks. I can’t wait for you to try our newest free upgrade, Windom. Let us know what you think when it launches.

Paul,
Myself and a bazillion other Ds’ers can’t wait.

Thanks again to you and all the Team, we all really appreciate this.

Paul, I can’t wait either.

Bear in mind that when I tested the Hugo TT2, the source was the same, i.e. my Zenith MK3, and the highs were sweet.

And by the way, the Zenith Mk3 is in the same price range as the DSD Sr: these audio components are of similar level of quality and attention to details, but the Zenith MK3 does not have a video display.

In fact, if you have the chance, I would recommend you borrow one for a listening session .

Here is an interesting review by Darko of the previous Zenith MK2: Richer sounds with the Innuos Zenith MKII SE | Darko.Audio.

I, too, have been using Audience Au24e XLRs between the DSD and pre-amp. They are great cables, and they’ve allowed the differences in firmware changes to come through the downstream electronics. FWIW, I found my pair of Audience Au24e RCAs to be superior to an older pair of Cardas Golden Reference XLRs when placed between the Stellar phono and the BHK preamp. Audience’s newer line of cables is a bit pricey, I must say, but if I had the dough I’d check them out. I’ve had Audience do upgrades on older cables, and they are very service-oriented and easy to work with.

I suspected that the HF noise may have been coming from the DSD Sr. video screen, but who knows, may be it is coming from my Wi-Fi router located on the 2nd floor about 30ft away from the DAC (diagonally “through” the ceiling floor).

As for the cable upgrades, I was made aware of that possibility by reading Audience web site, but when I asked my dealer, he said he was hesitant because being Canadian, I have to ship the cable to the USA and make sure all the proper documentation is filled so that the cable will make it through the custom to Audience factory and then back to Canada.
Apparently, this not a done deal and I could end up losing my cables in the process.

I believe he would prefer taking my older cables in exchange for money (those cables do keep a good resale value) , and then have me buy new ones.

I may do that in the future, but for now I am fine.

By the way, as far as amazing audio upgrade, I thought that my new Audience USB cable brought the most amazing improvements.

I am glad you appreciate your Audience cables - they are really amazing product.

I’ve read a couple of reviews of the new Audience USB cable. If I used USB for my input to the DSD, this is the cable I’d have to buy. I’ve enjoyed the I2S cable that PS Audio included with the Memory Player, however. And I use ethernet to stream Qobuz and the like.

As you’re in Canada, have you heard the cables from Audio Sensibility? They aren’t that well known here, but I’ve bought a number of cables from them. When I needed some rather long XLRs to connect my BHK Pre to the BHK monoblocks, I decided to get a pair of their Statement SE XLRs. I’ve got another pair of those to use with the Stellar phono, and a couple of their Statement power cords. These all seem very well made and are so close to the Audience cables in performance, at a refreshingly low cost. Steve Huang is a great guy to work with, and it seems to me his mission and integrity are very similar to PS Audio’s in creating great gear at a moderate price point, all for the sake of an authentic musical experience.

Thanks for giving me an occasion to give Audio Sensibility a shout-out!

I did not know about Audio Sensibility.

I will certainly look it up, especially if I can get same quality for less.

Thank you very much!