What do I need in component parts and power draw capacity per the included isolation transformer’s capabilities, in order to construct a working capacitor that works with air as the dielectric with a plate distance of 1cm with rhodium-plated 1cm^2 silver disks as capacitor plates?
So a conductor-plate-air-plate-conductor interface?
By “working capacitor” I mean something that works in a nominally 8ohm crossover circuit with 100W power handling? (Or something about equal)

Is this something that difficult to calculate?
If the thickness of the capacitor plates are needed let’s say 0.1cm. The conductor all in all is rhodium-plated silver. Radially 1% of the conductor is rhodium.

A plate distance of 1cm for 1cm^2 disks doesn’t make much sense. For a plate capacitor you want the area of the plates to be big compared to the distance between them. If you have a large plate area to plate distance ratio you can use the approximation of
C = k ϵ0 A / d
Where ϵ0 is the permittivity of space (8.854 × 10−12 F/m)
k is the relative permittivity of dielectric material (1.00058986 for air)
d is the separation between the plates and
A is the area of plates
[Edit: Dang it, I somehow lost the “/” before the d]

And don’t forget the dielectric behavior of air will vary based on humidity, temperature, etc. Not the most stable capacitor you could construct.

Thanks for the comprehensive answer.
I was thinking to myself, maybe a 1cm plate distance is superfluously large.
How should I optimize the optimally small plate distance? By empirical testing or are the formulas advanced enough to simply and explicitly answer any such questions?
I’m especially interested in the complex-valued solutions, nature isn’t a real-only space after all.

To make a point, I’m not especially interested in calculating a specific value, but methods of optimizing values.

To optimize a plate capacitor you only have three things to do: make the area bigger, make the distance smaller or get a better dielectric.

The place frequency might enter the design is that dielectrics aren’t perfect and their relative permittivity may depend on frequency (and other physical factors like temperature.)

Some other non-ideal behavior is described in the Capacitor Wiki page:

Real capacitors deviate from the ideal capacitor equation in a number of ways. Some of these, such as leakage current and parasitic effects are linear, or can be analyzed as nearly linear, and can be dealt with by adding virtual components to the equivalent circuit of an ideal capacitor. The usual methods of network analysis can then be applied. In other cases, such as with breakdown voltage, the effect is non-linear and ordinary (normal, e.g., linear) network analysis cannot be used, the ef

to my brain that likes graphs but recoils from formulae these days, it helps to think in terms of a variable capacitor such as used to be in “real” radios.
500 pF say, with a parallel plate area of up to a few cms. square, and a distance of less than a mm.
edit
500 pF is rather small
for most crossovers though, so it’s going to scale up in size or down in plate separation quite a bit, which means a lot of precision eng. or a non air (solid) dielectric. (i.e. buy a capacitor)

…I want to meticulously design one eventually and have it made, but I want an unconventional free-air approach because you know, something about it just seems right. I can’t say why exactly, I’m a novice, but trusting on intuition brings some great things sometimes. Gotta hope.

Sorry I didn’t understand the equation syntax, is it:
C=kϵ0(A/d)
?

I can totally understand your way of thinking @Arenith. Big thinkers come to big solutions and subsequently to great sounds…!

However @kcleveland123 has a point. Air, specifically “free” air has a lot of parameters that can negatively influence the dielectric, most of all moisture. It is not for nothing that big and renown cap manufacturers go to great lengths to find all sorts of dielectrics, like honey, oil, heck maybe even peanut butter.

I don’t know if you are familiar with this character, who has a maybe even weirder hobby than we have: he “listens” to capacitors and has made a comprehensive list so important to me that I even take it with me when I go to bed. Maybe that’ll help you in your quest to ultimacy…

Nice…!
Yeah, maybe free-air is the wrong term here. The plates should be enclosed in a capsule of a stabilized air concentration. Is there anything “better” as a dielectric than a stable air mixture? I’m slightly confused of vacuums… A capacitor won’t work with no dielectric, right? The end result of a vacuum-based solution would resemble more like a tube, right? I guess a heater circuit would have to be introduced for vacuum transfer of electrons?
I know little, I know…

A capacitor made with a vacuum between the plates is nearly identical to an air dielectric capacitor. Dielectric constant of 1.0 for vacuum and 1.00059 for dry air. Each of these capacitors must be quite large and have the gap between plates as small as practical. Small gaps will limit dielectric strength (voltage rating).

Sorry I didn’t understand the equation syntax, is it:
C=k ϵ0 (A/d)

Yep, and if it’s not obvious it’s in SI units (use meters for the area and distance.)
The Wikipedia capacitor page has a lot of info that might be useful.

Everyone knows little @Arenith… It’s a relative thing… LOL Go ahead and invent, get rich and conquer the world… Keep us posted…

I’m a novice, but trusting on intuition brings some great things sometimes.

Go for it! At a minimum it will be satisfying.

Wow, you guys. You are an inspiring and forward pushing bunch, you all.
Thanks… I feel better now.

I don’t know if you are familiar with this character, who has a maybe even weirder hobby than we have: he “listens” to capacitors , , ,

Wow! What an awesome website. This one went into my list of audio-related bookmarks. Hat tip to him for going this deep down the capacitor rabbit hole.

That said, I didn’t see a rating for the flux capacitor. It’s come to my attention that they can become unstable under certain circumstances 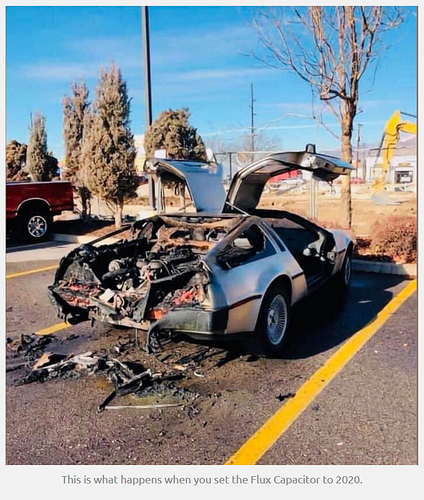 LOL… Maybe from another time…?

So I understand that that the concept of a capacitor consisting of two plates in the literal sense of “plates” as in parallel squares or disks is pretty much just a way of demonstrating a general concept.
However, if done right, is there any disadvantage to this other than size? Is there perhaps even advantage to this, compared to a cylindrical design for example?
For a very special, non-commercial purpose, could I go a route so easy as to have, say, 1m^2 foil/film (what’s the difference between foil and film…?) plates with 0.1mm distance, enclosed in a capsule filled with dry air? That would yield a fairly high capacitance. Wouldn’t fit in any device, but I’m only after something simple that works.

Foil would be the metal plates - film (non-conducting) is often used instead of air as the dielectric (it makes it much simpler from an engineering point of view having film to separate the two conductors than air).
Engineering two plates that size to be 0.1 mm apart but not touching is a serious engineering feat (in my book anyway) as a one-off.