How do you stream video to your soundroom? IE Concert Videos

What is your method for watching concert videos in your sound room?

Right now I use 5K player via a PC to access all my concert videos from a NAS. (optical out from PC to SGCD)
I have a Bluray player and use that sometimes but I’m all about NAS stored convenience - like my cds and SACDs. The less I have to touch DVDs & BluRays - the better. I have about 120 concert vids.

If someone makes a good quality audiophile VIDEO streamer - I’ve never found one.
I need… like Roon Video!

I have a 65" curved screen between and slightly behind 3.7i - I had a flat screen but tried the curved to see if it better suit a dipole room setup. Did it help? I think a bit - but mostly it was a good justification to get myself the curved screen. It is certainly great for concerts!

Other methods or suggestions?

I use bluray out of a panasonic player into my McIntosh processor with RoomPerfect It will run 6 channels.

I prefer this format.

DTS-HD Master Audio (DTS-HD MA; known as DTS++ before 2004) is a multi-channel, lossless audio codec developed by DTS as an extension of the lossy DTS Coherent Acoustics codec (DTS CA; usually itself referred to as just DTS).

This is a good question, and I don’t have any answers as far as high quality audio with video. There are a few standout video music dvd’s with INCREDIBLE sound quality, like Diana Krall Live in Paris. I will download videos from YouTube (it is ok to cringe) to my computer and transfer them to a usb flash drive, and insert that in a Panasonic DP UB9000 4k player with a fantastic sounding DAC. Yes, I can easily hear the lower quality bit depth of the YouTube platform, especially in the more complicated musical segments. There is a reasonably decent recording of Hilary Hahn playing a Beethoven Violin Concerto from Detroit, and would love to have a higher bit-depth version than what YouTube offers. I even contacted the people involved, and the only file they had on hand was the file used for the youtube video, and they were unwilling and not allowed to give that file out.

Digital Concert Hall from the AppleTV, then BluRay and DVD.

I’m using a MacMini with its external drive to play DVD concert, plugging USB to the DS DAC (audio) and HDMI to a LG monitor(video).
Not a big result as SQ but practical at the moment.

My new project room will have a projector but this is a new rabbit hold I will consider in a second time, so any thoughts here is very appreciated from experienced members.

For video I use a 4k Apple TV. It’s simple, reliable and the sound is ok. I have a few concert videos in my library from Image Entertainment that are pretty good. The best ones being Steve Winwood:Live and America: Live in Chicago. Both from a number of years ago. Obviously I don’t watch much video.

So why does no one make a audiophile media streamer that also plays video as well as audio…?
So far the Nvidia Shield is the closest thing I have…

Apple TV Gen 2:
Video out over HDMI to whatever screen is around (it varies, and I don’t use video often).
Audio out via TOSLINK into my DAC.

I believe the Gen 2 is the last model to have TOSLINK out as well as HDMI (terrible decision!).

Videos served via Plex, with Plexconnect running on the same server (“middleware” to translate ATV2 “Trailers” functionality into Plex commands and vice versa).
The server is only a Raspberry Pi 4B - plenty beefy enough for my own use - with video files mounted to it from NAS NFS share.

As an aside, one of the joys of using Plex is that it pulls in artist pics from the internet, so some rather surprising images occasionally pop up.
I have a tiny amount of classical, and I treat them same as any other artist, so I get the vision of a whole bunch of “modern” artists trying to look cool or doing random stuff, then Edward Elgar pops up, complete with old-school twirly mustache… 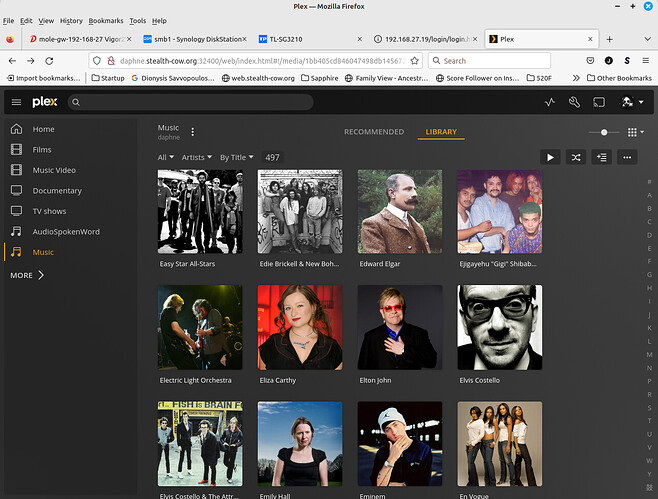