Major Shoutout to the DS Sr. in the June 2019 Stereophile

It is a little over the top to say anyone was told they should fix their issues themselves. I know personally I have spoken about the difference in stability of the PWT with the original IDE PATA interfaced drive over the SATA drives. Yes Elk is correct it is easy to open the PWT or Any PS product if you have the all threads. I much prefer fixing things myself to subjecting my unit to the dangers of shipping when the issue is something I am capable of handling. I have replaced a screen on the PWT and tried different drives. As far as i am concerned this adds some fun to the hobby and makes my pieces even more a part of my own system. You are free to request a fancier box if you wish just as jlm is free to suggest putting your DS in a custom enclosure. i also have enjoyed logging issues with the DMP for Barry. All these things satisfy my desire to be involved with my system. If you want to call me a superfan I have no problem with that. My system has never sounded better than it currently does and I have not heard the BHK 250 in it yet. It is due to arrive tomorrow. I am not saying some have had some terrible issues with their brand new pieces. It seems much worse over seas than hear in the US. For a friendly forum there is too much snipping going on. Let’s all respect each other and enjoy our systems. After all that is all we are all trying to do.

Which exactly makes my point. I was not sniping. I was merely putting forward my own preference for the chassis on a new DAC. Seems I shouldn’t be doing that.

Fancy aluminum brings up the Dire Straights song ‘Money for Nothing’ as far as I am concerned.

I completely disagree. It not only provides aesthetic improvements, it provides damping to the entire chassis as well as EMF protection. That is why a lot of the high end brands use them. They are not stupid, if they could get away with saying a cheaper enclosure is just as good they would.

I find it strange when people are making comments on how much difference changes to PIC code on the DAC or dimming the screen make that people would ignore this rather obvious point.

Many of us invest money on tweaks like vibration isolation, EMF protection with special cables and the like, this actually makes more sense since you are starting off with a solid baseline.

Doubt if PS Audio would ever get into customized cabinets. The cost for what you have in mind could be ridiculously expensive and not add to the sound quality. I prefer a common sense form following function build quality that doesn’t force me to pay for ego satisfying looks. Decades ago had McIntosh, which was overbuilt, over glamorized, and sounded like crap. Milled thick aluminum faceplates, chassis able to survive a drop from a 3 story building, and the like at tremendous prices are just ridiculous.

Well I was suggesting a special edition with an upgraded chassis - so people that want it can buy it. Obviously it would not need to be in the same numbers as the regular version but I was not suggesting they do it for just one person.

It was Broderic who was talking about customising components for individuals.

I would also refer you to my previous point about how chassis construction does actually matter to sound quality.

Most components that have aluminium CNC cases do so for technical reasons, whether as a heatsink (my previous streamer and amplifier) or for structural rigidity (dCS units, Piega MLS speakers and my Claro turntable). It doesn’t make sense for purely cosmetic reasons due to the cost if the cases are subcontracted. Where it is important, the manufacturer would normally do the CNC work in-house. It is an expensive investment, but really pays off long term.

The DSD DAC may have lasted 5 years (Linn’s streamers have been around longer), but in the UK the prices have been reduced by 25%.

Can you imagine how much something like my turntable chassis would cost to buy in if they didn’t have their own CNC machines and technicians? 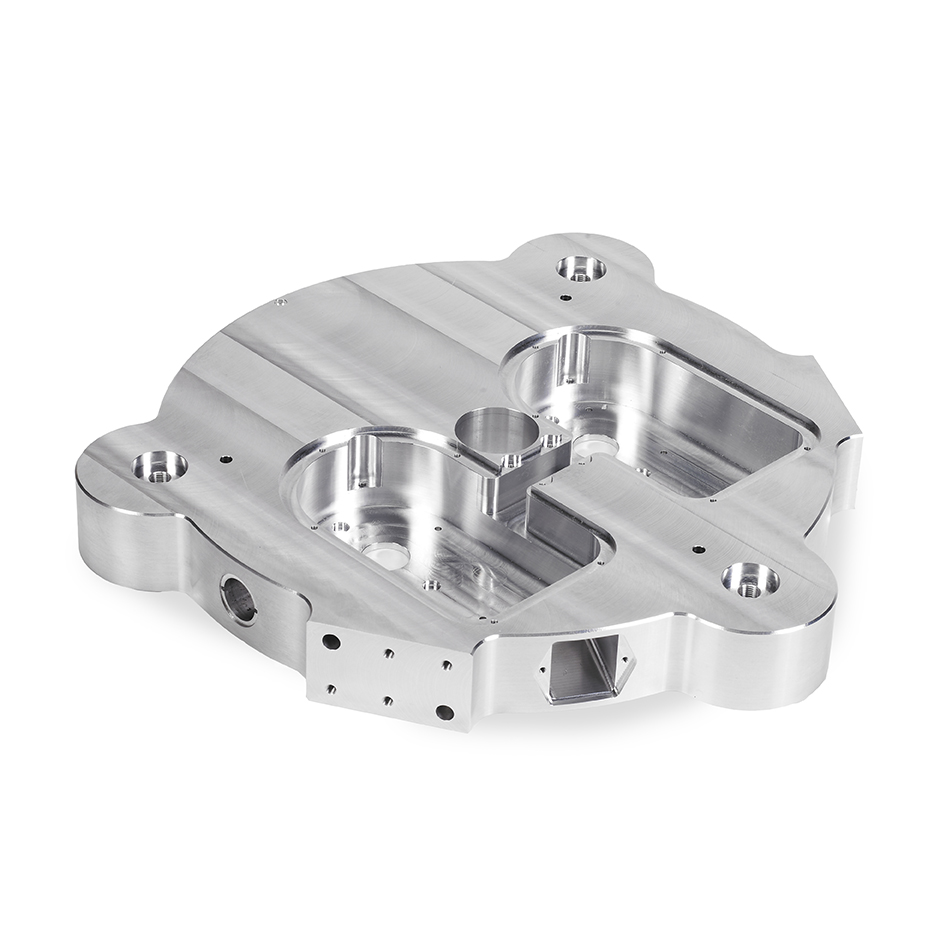 Yes someone from PS Audio was saying they looked into it and it would double the price.

My previous server was made by a company that has been making fanless PCs, servers and NUCs for years. They do all the machining in house. The server was a clone of a £2,500 Naim unit, using the same software and components. The Naim came in a pressed steel case. Mine came in a machined aluminium case and cost £1,900. The Naim would have been £4,000 in the aluminium case.

If anyone had any doubt about why it is so expensive to buy in this machining, polishing, painting and engraving, watch this video. You need a lot of volume to justify the investment in the machine and factory space.

The chassis currently in use already provides shielding from external noise the effects of the screen would require better internal shielding.

The aluminium Roon Nucleus+ i7 is £2,500. You could order an i7 Tranquil unit for about half the price and just add software and a 12v iFi power supply!

Nucleus+, Tranquil… wooow, lot going on in that Tranquil… Me, I like simple… Yeah, a nice 18V Sbooster and USB to Matrix with Ethernet connected and off you go… took me 2 minutes to hook up w/ Roon and BOOHA! off to the races. Not looking for another laptop on my rack…

Nucleus by Roon Labs Introduction The Nucleus and Nucleus+ appliances were conceived to bring Roon to a wide audience of music lovers, particularly those who aren’t highly technical or interested in do-it-yourself (DIY) projects. By tightly...

I’ve run the Roon Nucleus+ for 6 months (24/7) and the external enclosure (hottest spot) temp (laser thermometer) measured has never went over 98F. In addition, I have never had one drop out or failure. The ROCK runs just one application (not a laptop), Roon core… I have (3) laptops and I was not interested in another in my rack, rugged or otherwise. I am just looking to keep it extremely simple because I am not a smart person.

It’s the product that introduced me to PSA. Best audio buy I’ve ever made. I got rid of my $7000 analog setup after hearing it, never looked back.

Thanks Dirk, this really means a lot! Shout out to @tedsmith

I’ve been running Roon on an Innuos Zen Mk3 for the last 3 or 4 months, two internal linear power supplies, 4TB hard drive, CD ripper, direct ethernet connection to streamer and 15% cheaper than the Roon Nucleus+. Steel case and runs cool. The Tranquil unitscan be used for audio (they used to make a NUC), but mainly for industrial use and can be run over by a truck, literally.
The NUC kit used to be $950.


You could probably do this to your Nucleus.

@stevensegal - OK, guess you did not understand or digest my comments (even posted pics for ADD), so here it goes again in a more simple and direct response.

I’m the same, but looked at Nucleus and Innous very closely before buying Innuos, both of which are plug and play. The Tranquil type thing is purchased with hardware per a menu and you can choose to have it with no software at all, so just load the Roon software that I understand is on the net. That’s well above my pay grade. I preferred the Zen for several reasons, the casing not being one of them. Lots of people build their own, even cheaper than the Tranquil. I’ve never had a mains voltage computer in my audio system (over the last 10 years I’ve used Linn, Tranquil and Auralic with music on a network drive and now Innuos with music inside). Like some other home-made stuff, the Tranquil needs 9v and can be run off a battery (I have a SOTM 9v battery device for a media switch).

@stevensegal - I get it… no issues… I bought the Roon cause:

I did not want to go that direction, that is all I am saying… There are better streamers out there, believe me… All of my library is double backed up on my network. I am using dBpoweramp and perfect TUNEs to prune, clean, add cover artwork, and solidify my 4TB local library. Streaming is a full contact sport…

We went in the same direction. My unit only runs Roon and the Innuos operating system that is kept incredibly basic, basically just handles a few settings. You can load other software to run uPnP players, but I understand most people use it for Roon.

I thought about SSD, but was advised by Innuos that as one of the chip cores is used for buffering music for playback, there is no audible sound quality difference between SATA and SSD drives. Like Nucleus, the Innuos can also be used with external drives (usb or network), but the music is streamed direct, not buffered. I never found out if Nucleus buffers music from an external source.

Anyway, they are both designed to do the same thing and are fairly similar, and Innuos do a cheaper Zen Mini version for use with a single external linear power supply of choice, like Nucleus.

Laurence mentioned he found with his Auralic G1 that the dedicated power supply to the usb output makes a big difference, the same as in the Zen (there is a single linear supply to the usb and ethernet outputs). The G1 is also popular around here and is the same sort of price.

@stevensegal - There is a difference between running Roon on a WIN OS and ROCK… a big difference. The Nucleus+ comes w/ ROCK… that is one of the big reasons I went Nucleus+. Every laptop in the world has Roon… Nucleus+ has ROCK…

After listening Rock vs Windows OS on Roon on the same setup, my conclusion, Rock is indeed a leap in sound quality. My impression is it has darker background, instruments and vocals are more refined especially at the edge and top ends. Everything...

SSD vs. HDD - If I have a choice, always SSD… nothing mechanical spinning at high speeds external or internal. However, they cost 3-4X HDDs so they are cost prohibitive. I just replace my 860 PRO 1TB w/ 4TB EVO… so my 1TB SSD PRO is for sale…

A lot of these choices are experiential and there are so many ways to configure a system. Love my system and it sounds amazing. However, there are a lot of other power supplies, streamers, amps… that are just as good… you just have to try them. In addition, a lot comes down to comfort zone, technical acumen, and just plain bias… I have a bias… PSA…

That’s why I went with an SSD in my Nucleus. It may not affect sound quality in the Innuos but they seem to be neglecting the fact that magnetic hard drives make a lot of actual noise. You can easily hear it. It may not matter if your server is in a different room but if you have it on your hifi rack it will.