Which albums did they made together?

I try to find some list of this “million dollar trio” albums but found only this cd: 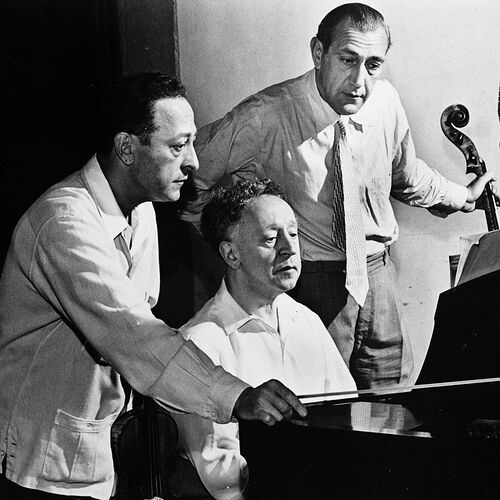 I treasure a two-record LP set (RCA LM 7025). The notes bear a copyright 1963. The notes, by George Jellinek, declare that this set contains the only recordings made by the trio as including Feuermann. The recordings were set down in 1940, just before Feuermann died. The works include Beethoven’s Archduke, Brahms op. 8, and Schubert’s op. 99.
The Wikipedia article on Feuermann indicates that circa 1929-33, Feuermann played with Heifetz, Primrose and Rubinstein. However it does not allude to recordings, nor does it actually say that Feuermann played with Heifetz and Rubinstein as a trio (as opposed to sonatas or maybe piano quartets). The Wikipedia article may not be fully trustworthy, as it also says Feuermann played with his “brother” Bruno Walter. That seems to me unlikely as Bruno Walter was 26 years older and born in Berlin, as opposed to Feuermann’s Galician birth in 1902.

Qobuz streams a digital transfer of the Brahms trio .

Heifetz and Rubinstein did not reconstitute their trio with Gregor Piatigorsky (shown in your photo) until nine years after Feuermann’s death.

" The thought arises from playing a reissue of recordings made by Artur Rubinstein, Jascha Heifetz and Emanuel Feuermann in September, 1941. They got together for three days in Hollywood and put on disks Beethoven’s Trio in B flat (Op. 97, Archduke), Brahms’s Trio in B (Op. 8) and Schubert’s Trio in B flat (Op. 99) (two disks, RCA Victor LM 7025)."

" Collaborations include his 1941 recordings of piano trios by Beethoven, Schubert, and Brahms with cellist Emanuel Feuermann and pianist Arthur Rubinstein as well as a later collaboration with Rubinstein and cellist Gregor Piatigorsky, with whom he recorded trios by Maurice Ravel, Tchaikovsky, and Felix Mendelssohn. Both formations were sometimes referred to as the Million Dollar Trio ." 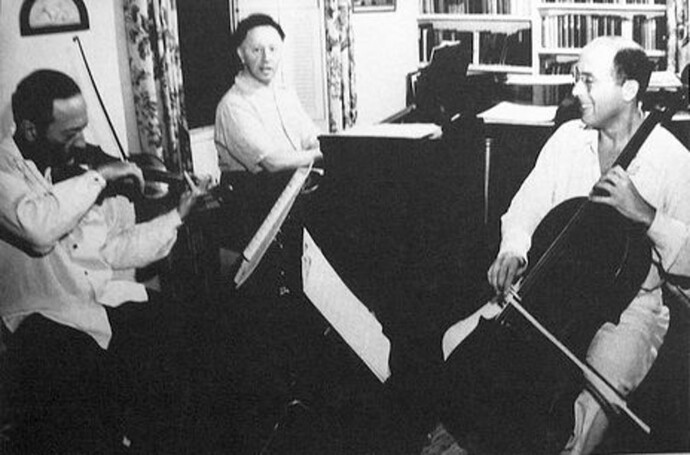