Need help....can an hdmi arc cable be fitted with a usb male termination?

Oppo states that:
“To listen to high resolution audio formats in their best quality,
please use the HDMI connection.”

So my question is can an hdmi arc terminated at one end be terminated with a usb
termination at the other end…?

Reason being that I would like to enjoy even more resolution…I do not have I2S
capable server.

Thanks everyone
Best wishes

I was just wondering the same thing except the other way. Can I get my Roon Core NUC USB to HDMI.

They do make hdmi extractors which are on ebay for cheap. under $100. They take the oppo HDMI and translate to just audio (probably just remove the encryption and video if any) and have HDMI out. I used on my matrix mini pro 3 fine. But then sold as I got the MK1 and Sonore streamer. no longer needed.

Would DDC then output USB? I know they do USB to I2S. They make work other way??? No idea

UPDATE: Just read DDC manual for Matrix 2. I2S is OUTPUT only. USB is INPUT only. So it may work for me but not sure if the Anthem will be able to process that HDMI signal. probably not. Below is the I2S configs. not sure either will work with AVR that does not speak I2S. 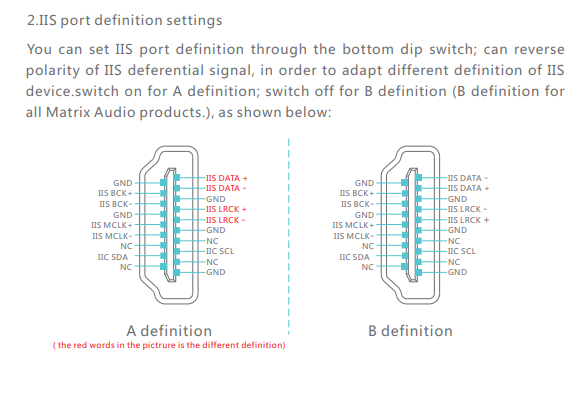 No. These are different protocols; USB and HDMI. They won’t talk to each other.

The easy thing to do here is use the Optical or Coaxial output which supports high resolution 2-channel. HDMI will support high resolution multichannel (maybe, depends on source) but, again, that needs to go into an HDMI receiver that understands the HDMI protocol.

As posted above, there are HDMI audio extractors. They extract the PCM bitstream and output via SPDIF (normally). You could then use a DDC to convert that to USB Audio. But that seems like a lot of work.

A Raspberry Pi as Roon endpoint for USB would work just fine as well.

I2S and HDMI are very different and incompatible protocols. It so happens that when manufactures decided to expose I2S outside the box they used the same physical HDMI connector. This allowed for the use of existing cables. But on that connector there isn’t even a standard for which pins do what within I2S (although most have adopted the PS Audio pinout).

Don’t plug I2S and HDMI together. Nothing good will happen.

ipeverywhere makes me thing of something else. What is the use case? just spin a disk and use external DAC? 2 or 5.1? if you are doing two, you can probably have the Oppo translate DSD (if that is even a use case) to PCM and send out the coax dig output to your DAC. Need to know a bit more. If you have roon the 205 is a valid endpoint for Roon 2 channel only. Dont need anything else except the player on the network.

What is the use case?

yes, exactly… The 205 is a brilliant set of outputs… a decade+ ago

As far as I know, there is no way to get a DSD digital bitstream out of the 205. Any digital output converts DSD to PCM and that includes SACD sources. That means, to “hear the DSD” you must use the analog outputs. This is why it has analog out (including balanced 2-channel).

I recently got a DSD DAC and I rip my SACDs. Using the 205 as a “source” doesn’t make sense to me anymore unless I’ve got a multichannel source… any digital out will be PCM so I keep using the analog outs. But that also means I am clutching my old processor, with multi-in, as tight as possible. This rats nest of multichannel analog cables, which used to be normal, hasn’t really been supported in a very long time. The popular multichannel formats are all PCM now and expect to be delivered over HDMI. DSD multichannel is… dead simply because it’s a complete PITA to support.

This would be 2-channel. The only way to get multichannel digital out of the 205 is HDMI and it will be converted to PCM. oh, and you’re correct, Roon sees the 205 as 2-channel capable only. a Pi can run multichannel out its HDMI (but only at 16 bit).

From what I know the 205 has the 38PRO Saber dacs… or 28pro. not sure. But its still pretty relevant. But yeah all the new DACs out now make it dated.

You absolutely can get DSD multichannel and 2 channel to a capable AVR. I do that with my Anthem. I use the oppo phone app and play them either on disk or from NAS. Works great. I dont use Anthem at all for 2 channel. You do not have to convert to PCM unless the AVR / PRE requires it. Many do not.

Again I have no idea what OP was even trying to do. But sounds like convert to PCM and send to DSDAC is working.

I for one am waiting for Anthem to put roon on my AVM70. Then the player is just for movies. Period. Also I have tried the hdmi out of NUC, no DSD and Anthem does not know what the heck DoP is. So again have to convert to PCM using NUC HDMI. Anthem has no USB, so no go there. Anthem is a bit cheap on things. Even DSD they do “support” it but it works and they know it works. They do not pay Sony for the DSD or SACD labels, so they cannot say it does, but sure enough it works. I have been told by my dealer they delayed their roon release due to Atmos in Tidal. They wanted to support. Somehow I think that was an excuse to delay another year. They are over a year late now.