I’m planning on installing recessed LED ceiling lighting in my listening room in the next few weeks. Thinking of 12 lights in total, in three different “zones”, each zone having four lights and each zone being able to be dimmed independently.

There’s a bunch of different smart switches on the market, some really expensive units as well as some really cheap (sketchy) units.

What I’ve been kind of gravitating to is the new Lutron Caseta Diva switches. They’re clean and simple, don’t require a neutral line, their app is well sorted and stable, and aren’t all that expensive from a reliable company.

I installed and removed mine as they were adding quite a bit of noise to my system. Mine were 3 Leviton Decora Smart WiFi controlling (respectively) 8 dimmable LED high hats, 2 and 8 wall dimmable LED sconces (WAC lighting brand)

Let me know how your’ works.

I’ve wired our whole house with Insteon switches. Easy to install and the whole Insteon family of products is extensive. I have 164 devices. I’ve not had noise issues. That said, my audio is on separate and dedicated lines.

Never heard of Insteon. Price-wise, those are very similar to the Lutron units. Looks like you can only adjust the dimming via the app, or am I missing something?

And as for noise issues, I was planning on doing the three 20 amp outlets in this room just for the system. I still plan on doing that, but I really want to get the lighting done first. There’s zero light in this room other than the few LED lamps that I have in here, and they don’t amount to a hill of beans. LOL

They can be adjusted directly from the the switch. You can also create “scenes” which have programmed patterns. 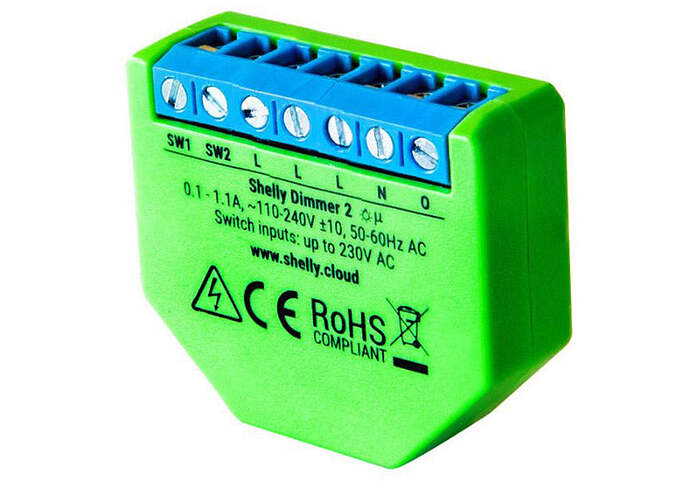 I use Shelly’s standard relays (model 1L) because my lights have their own intensity and colour/warmth control. I have no technical skills, but installed the Shelly’s myself.

They are controlled by app or Alexa.Shelly software is very sophisticated for a vast range of uses. As my lighting also houses speakers, and each unit has its own IP address, when I turn off the light switch on the wall it does not cut power to the lights, so I can turn them on again using voice or play music without turning on the lights.

On the ground floor main area of my house I have 24 lights and 13 speakers in 4 zones, and separate lighting above the kitchen island, and I only have a single wall switch. Initially the main reason for doing this is because products like Lutron are so expensive.

Anyone experienced Philips Hue out there? 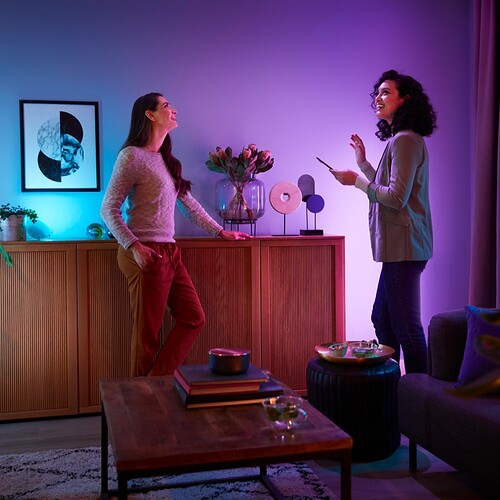 They can be adjusted directly from the the switch. You can also create “scenes” which have programmed patterns.

I really like those. It would be a toss-up between them and the Lutron honestly.

These are interesting. Makes me wonder though if there would be enough room in the boxes behind the switches. I’ve been in a couple of the switch boxes already, and things are rather tight in there already.

Shelly have to be used with normal toggle switches and there is always room. I have one in a box with a toggle and a dimmer, so I had to put in a larger box.

The Phillips are interesting. I suspect you need the hub to make them work with Alexa.

I already have the Philips Hue lights (yes they need a hub) in all my rooms house. Different scenarios preset and programmable. A tap in each room like this one 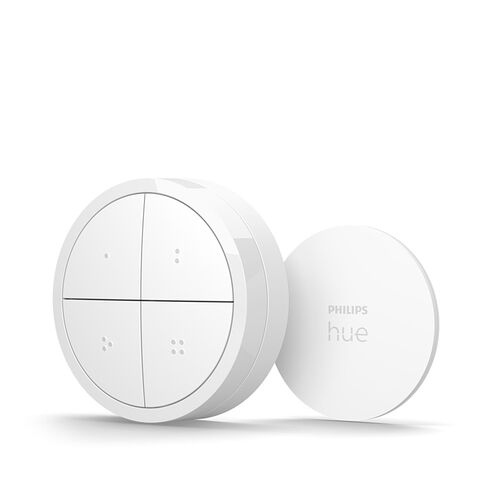 Control up to three Rooms or a Zone with each individual button of the Tap dial switch, available in black or white. Turn the dial to dim and brighten the lights. Mount it to the wall, place it on a magnetic surface, or use it as a remote control.

I have no Alexa or similar device but I can assure you that once I installed the tap 6 years ago I never used the “old” traditional wall switch since.

Just curious to know if other members use these devices in their listening room, pros and cons in their opinion.

We have some recessed lighting in the bookcases that is enough to be very relaxing and still be able to choose and change a record. This works off a wall switch, but I could put in a Shelly 1L so that they can be voice controlled. 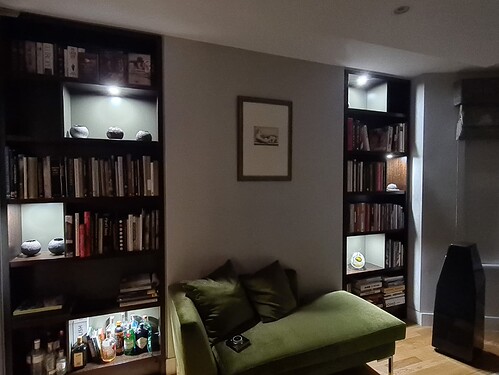 The main lighting is infinitely dimmable and the colour ranges from 2800 to 4800 kelvin. Like the Philips, these are LED, which is the only way to go these days. Their maximum is 530 lumens. They have a wider beam than traditional GU10 lights. 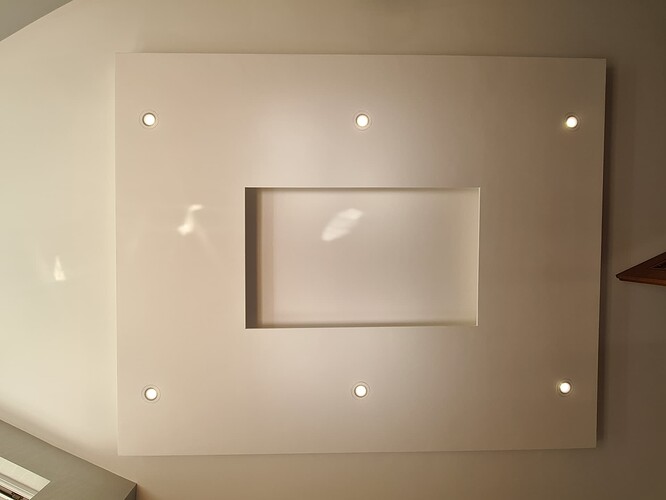 The Night Light scene is good for relaxed listening. 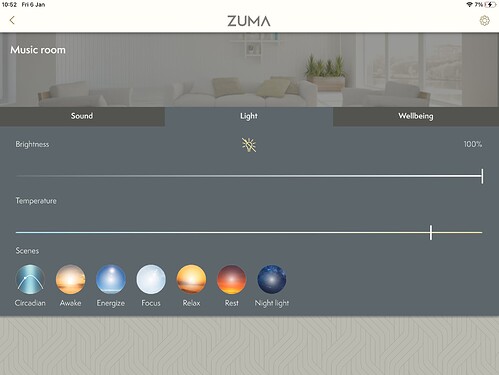 The difference here is that each of these 6 lights is also a full 24/192 pcm Roon/Amazon/Apple/Spotify/Tidal sound system.

The ceiling and the suspended part are made from Soundbloc, designed to break up and absorb ceiling reflections.

One of the great things about Alexa is Groups, so there is no limit how many zones can be used and grouped.

I’ve installed a large number of these and I was able to do so successfully. You can run into issues where the switch has a daisy chain of power and I’ve used smaller connectors. The newer clamping ones are the best for securing and streamlining the wires in the switch box.

Very nice setup. Interesting that some of your lights are also speakers. Haven’t been those before, though I have no need for them in my room as my main rig is always up and running.

Lutron’s system also allows scenes and schedules, which I’m not too terribly concerned about. Though with that said, other than getting some good lighting in this room, I do want to be able to have I guess what you would call “scenes” in the sense that I would want one zone set to a dim level to highlight the hifi system (speakers, equipment rack). Another zone would be for the far corners of the room only, then the last zone for a row a lights right down the middle of the room.

And that’s the other topic here, the lights themselves. Going with the ultra-thin (wafer) style LED lights are a must, and I’m also thinking of getting the ones that have the “halo” night light feature. I also think I want to go with the 4" versions, not the 6". I’m not 100% set on that, but…

My product is not yet available in the USA.

LED does make dimming and warmth more possible and it adds greatly to the lighting effect, and Alexa integration makes a huge difference. The Phillips have that and Shelly allows you to do it with non-Alexa products.

My system takes it to another level with speakers built in and they are on the way to having microphones within the bezel (they are an Amazon home automation partner) and motion sensors for security are also in the pipeline. I buy products for what they can do now, and having units that give me sound and light throughout the house with voice control integrated with multiple platforms including Roon works well. The speaker sound is almost hifi quality, as they were designed by the Vivid Audio and B&W Nautilus guy.

Installing devices in your listening room that communicate via WiFi seems counter productive. Also most dimmer switches also emit a lot of RFI.

That’s my doubt even if I’m using them since years without any apparent issues. Actually I have 2 Switch Taps (old model not dimmer able) and 10 lights/strips in my room from Philips Hue.

It’s difficult to notice differences turning these lights on or off, this is the reason why I was asking if others had different results with this brand.

Installing devices in your listening room that communicate via WiFi seems counter productive. Also most dimmer switches also emit a lot of RFI.

Our house is already filled to the gills with WiFi. Our phones, laptops, iPads, watches, TVs, the Rokus, the Raspberry Pi4, even the Ring doorbell and extra cameras, the deadbolt lock and Nest thermostat.

There’s zero noise in either my main system or the bedroom system.

As for RFI from the dimmers, I have none in the house at the moment, but I guess I’ll cross that bridge when I get there. I hope I won’t get any noise from them. From what others have mentioned, they haven’t, so we shall see.

Plus as I mentioned earlier, I do plan on running several dedicated 20 amp lines in this room just for the system, one for the source units, the other two for the amp and subs. Possibly even have them coming from their own separate electrical panel.

My home installation of Insteon devices exceeds 150. These are devices of all types in a home automation situation. My son is disabled and I did this initially to allow him to have scenes that would turn on every necessary light for him should he wish to go somewhere. We also have water notifications should we have burst pipes in all bathrooms and under any sinks. These are just a few examples we have many more. All of these devices work on a mesh system. The more the merrier. I have no outward signs of spurious EMI/RFI in any of our TV’s or in my audio system. It’s all about the design. If it’s done well you shouldn’t have excessive noise.

My home system has 85 IP addresses including about 30 capable of 24/192 PCM wireless streaming and no connectivity issues at all.

The technology in getting multiple wireless 24/192 speakers to work together is advanced, requiring extremely fast transmission between primary and secondary units.

These are the light units.The bezels come in about 8 different designs and attach magnetically. There are now 3 different beam angles (22, 32 and 52 degrees). 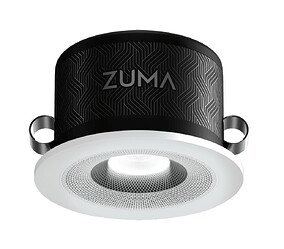 The speaker lights contain a full 75w streaming audio system with two drivers as well as the lighting, and still come in under $500 each. 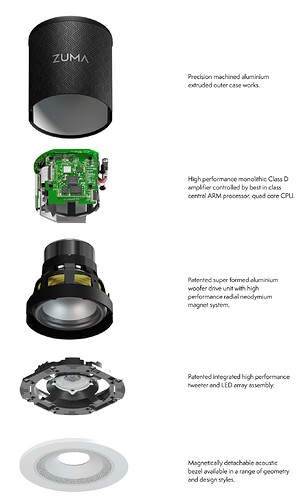 I have 12 Hue lights throughout my listening room. In my set up, they have zero audible impact on sound quality. Very stable and easy to install. I would recommend them very highly.

The Zuma lights look really really neat. I would like to try those in my dining room, where my home’s architecture prevents the installation of in-ceiling speakers. Maybe one day they will arrive in the US.