I purchased a USB microscope (one of the entry level range) with a software that enables measurements, photos and videos to be taken, along with an articulating arm mount. I guess I’m not finicky or obsessive enough yet setting up carts!

Then again, I’ve owned the Analog Magic software for 2 or 3 years and have yet to use it. It came with my turntable

The older I get, the harder it gets to land on the null points and set azimuth, forget about vta/sra. I know, I know, set it by ear…

Anyone use one? Do you find it beneficial?

Yup - went from the $300 to the $600 one, as the cheaper one doesn’t allow enough magnification. Really helps to actually watch what it is doing while on the record while it is PLAYING, which is not always the same as what it does sitting on the rest or sitting on a record not playing.

Yes.
One invaluable hint: make a microscope picture to measure the angle between stylus contact line and cantilever. Then when you want to measure SRA when playing or whatever, just orientate on the cantilever. You then can take a picture from the side with a smartphone and measure the angle between record and cantilever from the side. It’s as accurate as possible and MUCH easier than measuring stylus azimuth directly with the needle on the record.

I’ve used one for years, and after all that time I’ve come to a couple of conclusions:

I used AdjustPlus+ and for the last several years use AM (BTW, get v2 it’s better). What I do now is check the cart geometry with a USB before ever mounting it. It’ll tell me if the stylus mounting geometry relative to the cantilever is good. AM does a much more precise job of getting the whole thing lined up in all respects, and with some judicious listening adjustments and double checking on AM I’ve found it to be a lot easier than getting a USB capture of the stylus on a record (or equivalent) surface - especially with a tonearm finger lift in the way!

It’s interesting to read this topic. In my backlog of stuff to work on “someday” I think it’s possible with a phone camera and a bit of AI running on a cloud service to analyze how the cantilever and stylus are moving through a groove and then provide setting adjustment recommendations near real-time.

I probably won’t have time to work on this until I retire.

What Tony and Jazznut said.

All good tips and advice, Thank You!

Had not thought of video when the record is playing, makes sense that sra and azimuth would be impacted while playing

Mine arrives today and new table…etc tomorrow. I picked up the 1.3Mpix, but I just noticed that there is a model that works from an extended distance. 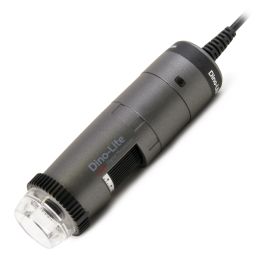 I’ve heard of ppl having to remove the plastic shroud on the microscope to get close enough, my tone arm lift threads into the head shell (Kuzma 4pt) and is removable so that may help as well. Minor tweak to the tracking force to compensate

I’m using a Mac with the Dino-Lite and I can draw lines, but not measure angles. Do I need to use a Windows computer to measure angles, or buy third party software?

I’ve heard of ppl having to remove the plastic shroud on the microscope to get close enough, my tone arm lift threads into the head shell (Kuzma 4pt) and is removable so that may help as well.

I remove the shroud. It’s still a b!tch to set up. Keep in mind that if you remove the tone arm lift and put it back, you run a small risk of throwing off something like azimuth or zenith, or even the overall stylus position. Easy enough to fix, if annoying.

I purchased via Amazon and they have a generic set of slides that state that the Dino-Lite model that I purchased had measurement capability, but it does not. So, make sure that you go to the Dino-Lite website and use their tool to make sure that you are getting the features that you want. The model that has the features that I want costs $799 vs the $329 that I paid. The more expensive is a 1.3Mpix, extended working distance, automatic magnification readings passed to the measurement software and a polarizing filter. Sure hard to look at the stylus with the LEDs on without a polarizing filter… anyway, getting pretty pricey.

I purchased from the Dino Lite site direct. Hoping it has the features, ya know, that the site says it has, if not back it goes

Supposed to receive it this wknd we shall see

Use the IOS app „Protractor“ in its transparent mode to take a picture of the picture you made from the cantilever related to the record surface. You can then measure the angle pictured with this tool (if you touch it, a line appears that measures it).

I usually make the initial picture of the stylus on the spinning record with my iPad and then take a screenshot with my iPhone of the transparent protractor picturing the previous picture shown on the iPad.

At the end you get something like that (this was just a rough first try, nothing’s properly parallel in this example): 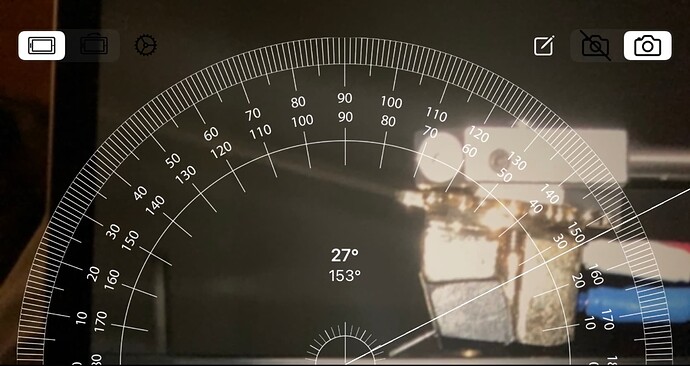 You can get into a lot for a real, sturdy fully adjustable stand. I hope Ledermann at Soundsmith comes out with his box soon. No idea when it is supposed to come out.
https://www.sound-smith.com/html/cartright/index.html

Isn’t this the thing that’s been on the SS website for like the last half-dozen years or so?

Oh, could be. I hadn’t seen it before. Would be nice…