So I am one of those people who often listen to music in the dark, or at least a very dimly lit room. The LED’s on most hifi (and everything else) drive me nuts. Usually I put a little LightDims sticker over the offending LED and Im back in my happy place. Due to the fact that the LED on the front of my new BHK 250 is a button too, I don’t think sticking something to the front of it is gonna do the trick.
How complicated and or dangerous would it be to open up the amp and put something over the LED from the inside? I’m not an electrician but I did take small electrics in highschool when such things were taught and we learned what not to touch inside 80’s appliances. Would this be an easy fix, or is the button / LED not something easily modified?

Have you considered making a flap cover? A piece of tape across the top of whatever material you pick, like a neatly cut square of poster board. If you put the tape half length-wise across the square and the other half on the 250, you can lift it whenever you need.

I have put Blu-Tack over lone LEDs and from there used like the dull end of a needle to open the passing light a bit, but mostly left the light shut out… If you have your amp wake from standby using another trigger or powering device you could make a thin frame around the button with Blu-Tack and cover it with a small piece of foam core (I once used the full black, core and all) cut to size. Zero mods, no opening of the unit and 100% reversible. If you do it right it looks good and it’s completely dark.

I found my little lightdims sheet had some larger pieces designed to be cut down. While it not 100% perfect, it does block nearly all of the light from the button. In a dark room you can see a hint of it around the edges. Here is a picture with the amp on. I’ll call this a success… 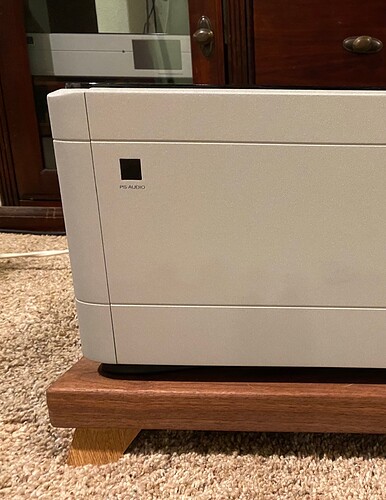