Opinions please - BHK 250 vs M1200. I listen mainly to classical piano. I read that Class D has some treble issues? Is this true? Which amp is more 3 dimensional? Some amps highlight the mid-bass which is a disaster for classical piano music - This causes the left hand to stand out when the left hand should be accompanying the right hand in most cases. Any additional thoughts would be appreciated. My speakers are B&W 801 Matrix Series 3, Pre-amp Audible Illusions L2, CD Player BAT. My tube amp died. Thank you.

As good as the M1200 is, the BHK250 is simply better. More air and more depth/width. If you have the funds, I would not hesitate to spend the little more that the BHK250 is.

Condolences on the death of your tube amp.
Congrats on combining tubes and B&W speakers.
I have the M1200’s and absolutely LOVE them. Their sound is definitely influenced by the preamp connected to them. But there is a general consensus that the BHK 250 sounds better than the M1200, and with the current (month of August) sale on the BHK 250, the BHK 250 is the better bargain too.

With the “bargain” factor due to the sale, I think Paul makes a solid point.

That said, I found mixed reviews here about it in the past. At least one user went from the BHK 250 to the M1200s, and after changing tubes he stayed with the M1200s.

I think that makes the point that they’re very, very close. and decided I liked the weight of the M1200s vs the BHK 250, the power consumption, and the M1200s claimed responsiveness to tubes. I bought a pair of them during the sale in May, and although I’m still breaking them in I’m just about ready to experiment with different tubes.

I don’t think you can make a bad choice between the two you’re considering.

I wrote this review after switching from the BHK250 to the M1200 amplifiers:
https://forum.psaudio.com/t/can-a-bhk250-owner-be-happy-with-the-m1200s-my-review/26191
I still stand by those conclusions after writing it in December of 2021. In my system, I have the opposite subjective opinion of those that feel the BHK250has superior ambience retrieval and sound staging. I find the ambience information retrieval of the M1200 to be superior to the BHK250 and sound staging is pretty much a draw. As some mentioned in the responses to the original review, aural memory of how a component sounded can be subject to error so I’m not going to discount the possibility that some aspects of my opinion might change if I had the BHK250 back for another round of listening. Classical music is majority of my listening, although it’s orchestral and smaller ensembles as opposed to piano. I have occasion to listen to a number of world class pianists at the Rebecca Pennys festival so I know what a piano is supposed to sound like in a good room and the M1200s don’t disappoint. (second generation Tidal Piano Cera speakers and two REL SHO/3 subwoofers.) The choice of preamp greatly influences the sound of the M1200s. I have a BHK preamp, a Modwright LS36.5, and a Dehavilland UltraVerve III and each lends a different character to the final result.

I should also reinforce the point that my opinion of the M1200s in my system is based on their performance AFTER rather extensive power conditioning. At present, the amps have their own wall duplex.That outlet has a PS Audio AC12 cord going to a PS Audio Detect. The wall outlet duplex has a High Fidelity Cable MC-.05 Helix and the outlet for each amp has its own High Fidelity Cable MC-.05 conditioner. Each amp has a Furutech Powerflux cable. So the cost of the power supply ancillaries tallies up to more than the cost of the amps. The BHK250 was used just straight into the wall, much simpler to get pleasing sound from that amp than has been the case with the M1200 amps. I found the sound of the M1200S straight into the wall to be too bright for my tastes.

and with the current (month of August) sale on the BHK 250, the BHK 250 is the better bargain too.

I know someone who may be selling a used 250 in the very near future.

I also may know of a single super low use M1200 (Just over 100 hours) that could be coming up for sale. You can buy a new single from PSA and the used one and be $1500 or so favorable in your purchase.

Thank you everyone for your very helpful comments.

If someone would share the color and the price… Someone else may buy it and wait until it’s available. PM is preferred. Thanks!

From what I understand, I decided to wait to sell the Silver BHK 250. My budget for the near term only has room for either an amp or a DAC. With the announcement that the DS MKII is going to be available around the end of September, I decided to wait for that instead of getting an amp.

Having done some mods to our DS MKI, and hearing the difference they have been making, it’s clear to me that I will hear a bigger change in sound quality with Ted’s new design.

I am going to put off the amp upgrade until midwinter.

Put it in the bank

If it doesn’t happen I will head back down the Rowland path.

Also on my list is the Technics SE-R1, and the D’Agostino Master Audio Systems Classic Stereo.

Have you tried Rowland amps in the past? I like their case work, stylish but not over the top.

I have been eyeing a few of the older Rowland’s currently for sale and am thinking I might just get one for my office as a gateway drug.

And there’s this that I’ve been eyeing as well: 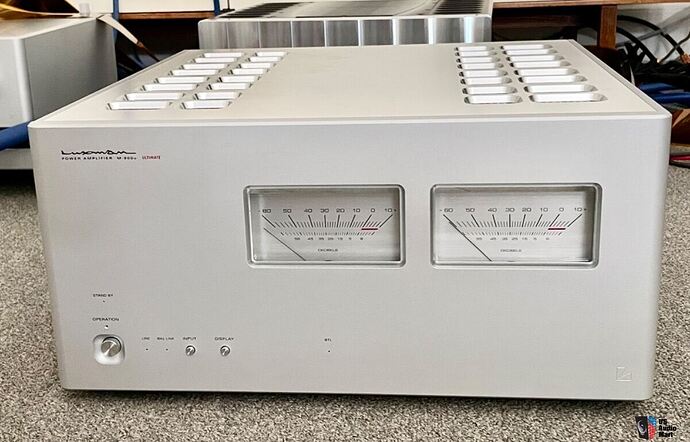 FOR SALE:A near mint condition Luxman M900u stereo poweramplifier. If you're familiar with this unit, you know it isconsidered one of the best solid state amplifiers availabletoday.I have rated the unit 9/10 only because it is pre-owned. Itis truly...