Tempted to get the 4’ long poster of it. Sadly I no longer have a large-format printer.

I almost forgot about the large printers. We had an HP (I think) 36" wide roll inkjet printer with 2 carousels that would change pen colors as needed. Talk about an expensive piece that was quickly outdated. Fun to watch though.

Ok…my mind has been blown.

(Disbelief, amazement and awe sets in…)

I’ll admit I have some difficulty getting my head around it - log scales and all. But sometimes that comes with getting a better sense of it. I’ll also admit to liking those linear sorts of things like scale models of the solar system with planets to scale distanced according to how big of a Earth or sun you start with.

The Universe in a Nutshell App is fun too, which goes from the Planck length (10 to the -35 meter) to the size of the universe (10 to the 26th meters).

I get log scales but not on that scale. Very cool but I was lost before the Milky Way. Marbles in the desert I can handle but even it was a bit of a mind blow.

Agreed; wrapping one’s head around log functions at this scale is astoundingly difficult.

Another scale thing I like to ponder is galaxies ‘crashing’ into one another. When you’re far enough away to resolve it into a single object, a galaxy looks almost solid - but is mostly space. Anything that looks bigger than dust isn’t in the distant galaxy but is usually in ours or is something else in between. Galaxies crashing is a bit like smoke rings crashing together. Lots of gravitational tidal interaction - and things would get ripped apart, and new stars formed. Even some black hole mergers, which are no doubt messy. But relatively few actual ‘particle’ collisions.

Alpha Centauri is pretty close, yeah? A mere 4ly from here. But the sun, a decent-sized star, is about 1.5 Ten Millionths of a light year in diameter. So 1.5 over 40,000,000 is the size proportion between the sun and the distance to the nearest star. One 30 millionth. Lotta space.

Time scale is fun too. We are closer in time to T. Rex than T. Rex was to Stegosaurus.

“Space is big. You just won’t believe how vastly, hugely, mind-bogglingly big it is. I mean, you may think it’s a long way down the road to the chemist’s, but that’s just peanuts to space.” - Douglas Adams

Heck, I just started to get a feel for a century - never mind a thousand years. Or a million.

Yeah the difference in my example is only 10 million years or so.

The Rose Planetarium, part of the NYC Museum of Natural History’s Hayden Planetarium, has what’s called the “Cosmic Pathway”. It’s a spiraling timeline of the universe, our solar system and life on earth - as illustrated in scale distances along this 360 foot pathway. It too, as with your linear timelines, is a fascinating way to really grasp the juxtapositions of our “perception” of time as opposed to the actual span of time.
I’ve seen adults just as awe struck as the kids, and more so, because time is rather meaningless to youngsters.

Carl Sagan’s Cosmic Calendar, where the history of the universe is shrunk down to a year. Humans don’t show up until 10:30pm on December 31st. 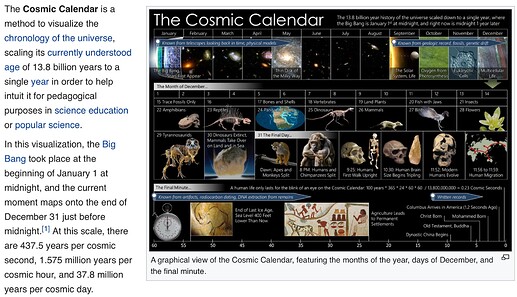 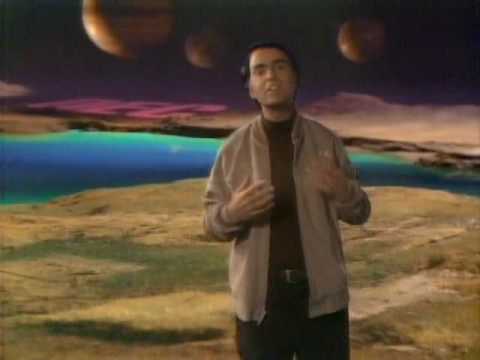 He was a huge addition to humanity and our curiosity for where we came from and where we might go.
The 600 lb. gorilla is the fact that the planet can no longer support a population this large and no one other than NASA and other similar groups from other nations want to face the obvious.

The 600 lb. gorilla is the fact that the planet can no longer support a population this large

Can’t let such a definitive statement go by without requesting some additional information.

No offense intended, my virtual friend,

No offense taken. It is simply a matter of looking at the facts.
This may be too political or out of line for this forum and if so I completely understand if the post goes away.
More than 40% of the animal life (food) in the oceans is gone with no way (no time) to let it grow back naturally if that’s even possible.
There is no more farm land left to easily use to grow food crops and livestock on. No one wants to pay more for food or housing or etc.
Pesticides and herbicides are also in the water supply and more are needed in higher and higher percentages in order to try and make crop yields higher to feed everyone.
Most people dont want nukes, coal or oil for power generation. All have serious issues.
Oil is not a renewable resource and there is no known substitute (so far).
Wind is only a short term solution and has a lot of baggage that no one wants to openly discuss.
Solar requires more destruction of land for mining materials for battery storage.
The inner cities are a human wasteland.
The people who have the best possibility for helping to save the planet are not reproducing.
The people who have no way of climbing out of poverty without outside help are reproducing like rats.
The water supply is becoming tainted with plastic and drugs that do not break down naturally and also are difficult or impossible to filter out. Water is also not a renewable resource.
Human waste landfills are a complete disaster. They are out of sight but shouldn’t be out of mind. Go visit a large city’s landfill for a day and then think about hundreds of thousands of them being filled every day. And the water supply that they will someday leach into.
There are plenty more items that I have made note of over a lifetime and this is of course just one man’s opinion. And I don’t consider myself a tree hugger or environmentalist.
Maybe just a realist.
All these reasons are why we are looking to the skies to see how we might survive into the next century and beyond.

I worked with Philip Morrison’s stepson for a time. I got to meet him and share a couple meals. He was in interesting guy.
https://en.wikipedia.org/wiki/Philip_Morrison

He did several TV series/shows with his wife.

Too much to unpack on this type of forum…for sure.

Suffice it to say, I don’t agree we are currently on a path to “unsustainability”.

I won’t quibble with some of the societal, political, energy policy and environmental issues you highlighted though – lots of room for improvement (to put it mildly).

The Powers of Ten was cool.

All these reasons are why we are looking to the skies to see how we might survive into the next century and beyond.

You reckon we can kick back on those lovely, inexpensive, oxygen, soil and water-rich paradise vacation spots like the moon and Mars when we trash the planet?