I dont think so but I do think they are a start of what may be possible for 10 or 100 generations down the road.
None of us present and accounted for will have to worry about it. The wanderlust is pegged into our genome and no one seems to know exactly why.

The Foundation Series by Issac Asimov is a sci-fi imagining of just these issues written in everyday language, without the usual sci-fi ladened techno babble. The amazing thing about Asimov is his sociological prescience with regards to how technology affects human societal norms, behaviors and interactions without actually stating it. The Robot’s series is another example of all this.

I will forever remember that the very first time I had ever heard the term “googleplex”
[the name given to the large number 10(10^100)] was on his series waaaaay back when it first ran in the '70’s(?).
I don’t recall if he was referring to the number of stars or planets in the universe.

With this simple calculation you get something like 10^22 to 10^24 stars in the Universe. This is only a rough number, as obviously not all galaxies are the same, just like on a beach the depth of sand will not be the same in different places."

Edit: the Powers got turned into regular numbers when I pasted the quote. So I’ve inserted a caret.

Note 1: And there are “WAY more stars now” than there were in Sagan’s time😝

Note 2: Not sure if this is some sort of comment on the Grandiosity of Google🤔

The wanderlust is pegged into our genome and no one seems to know exactly why.

“Oh give me land, lots of land, under starry skies above
Don’t fence me in”

From the Wiki:
"Originally written in 1934 for Adios, Argentina, an unproduced 20th Century Fox film musical, “Don’t Fence Me In” was based on text by Robert (Bob) Fletcher, a poet and engineer with the Department of Highways in Helena, Montana. Cole Porter, who had been asked to write a cowboy song for the 20th Century Fox musical, bought the poem from Fletcher for $250.

Porter reworked Fletcher’s poem, and when the song was first published, Porter was credited with sole authorship. Porter had wanted to give Fletcher co-authorship credit, but his publishers did not allow it. The original copyright publication notice dated October 10, 1944 and the copyright card dated and filed on October 12, 1944 in the U.S. Copyright Office solely lists words and music by Cole Porter. After the song became popular, however, Fletcher hired attorneys who negotiated his co-authorship credit in subsequent publications. Although it was one of the most popular songs of its time, Porter claimed it was his least favorite of his compositions."

When it comes to looking at the stars, choosing to do what I do working space hardware, the fascination I have for manned and unmanned space, all the reasons suggested on the thread apply in general. The reason I do what I do is less wanderlust and more staying out of trouble. Some of us seem to be born with a destiny. If it weren’t for engineering and science, not sure what flavor of miscreant I might have turned into. Thankfully for society I chose the path that kept me out of mischief.

Congrats on an interesting career and field of expertise. Gifted minds with an energetic soul can go either of two ways. You can apply the effort on one side of the fence and end up with some cool friends and a nice pile of stuff or you can go over to the other side and end up with a lot of wild stories and nothing more to show for a lifetime.
I am not formally educated but have self educated and applied myself in a similar manner and managed to stay on the right side of the path.
I really appreciate your enlightenment on the subject matter here as it is very fascinating but still boils down to very precisely calculated and tested to death pile of nuts and bolts.

very precisely calculated and tested to death pile of nuts and bolts.

I grew up in the Detroit area, and you live in MI, yeah? How do you get around?

Most days it’s pretty good to be me.
And up until 2 years ago I walked to work every day.

I do envy you.
The closet to anything “astrophysical” I ever got to was my time as an undergrad at the University of Arizona; just when they were launching the Voyager spacecrafts. I had elective’s in astronomy which I found fascinating. I may be wrong, but I believe some of Kitt Peak’s observatories were still in the construction phase in those days. Lots of fond memories of driving out to the desert at night, sitting on the car hood just looking at the Milky Way, “shooting stars” and satellites. Of course a beautiful girl and tequila made it heaven on earth.

Speaking of Voyager…I was happy to hear that the “garbled” telemetry issue was fixed ! 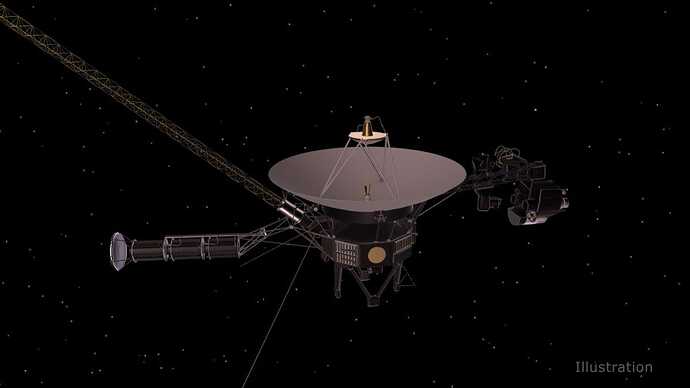 The space probe left Earth in 1977, and it's still running—with some hiccups.

When I first encountered “Google”, the search engine, I was immediately thrust back to Carl Sagan’s comments I had mentioned. Life can be strange at times…

Some of the best money NASA ever spent !

I was thinking lots of oil changes and tire rotations.

And all they needed is 5W…

I generally take a dim view of cutesy games with science data, but some enterprising scientists and musicians have designed algorithms to set JWST images and data to sound for the benefit of the visually impaired. So freakin’ cool.

This is very definition of outreach to foster interest in JWST and science in general.

And we did prototype work on almost all of them.

It’s of interest the spacecraft autonomously switched to an on-board computer known to be corrupted. Which shouldn’t have happened. While the engineering team fixed the telemetry problem with a manual command to switch to a backup computer (a beautiful example of why we build redundancy into our spacecraft to meet our reliability requirements), the work doesn’t end there. They’ll be working a fishbone to determine root cause for the autonomous switch. Perverse as it sounds, in spacecraft engineering a mission anomaly is what really makes the job interesting. Everything we know gets applied to finding root cause based on telemetry, memory dumps, etc. without the benefit of having the hardware in the lab. I’m going to be most interested in what the Voyager team determines the root cause to be. We roll lessons learned from these flight anomalies into future design rules. Voyagers 1 and 2 are the ultimate engineering test beds, having flown beyond the heliosphere into a space environment we know little about. Love it.