The question I have today pertains to a DAC. While my first choice is PSA’s DirectStream, its cost plus the cost of the bridge upgrade put it outside of my budget. Maybe some day…. That said, could anyone recommend a DAC of nearly the same quality - perhaps an earlier PS Audio model or a contemporary equivalent? My ceiling is $3,000.

My functional needs are straightforward: tying my CD player into the overall system, streaming Qobuz at hi-fi quality and, to a lesser degree, playing music from my home library.

Used DirectStream Sr are around $3K plus $400 or so for a bridge If you’re in the US. It’s reliable. I bought mine used in that range and 3 years later, it’s still working daily at generating smiles.

You don’t say what your budget really is but if you need a DAC and a streamer I would be looking at the Teac NT-505 and the Auralic Altair G1. I’ve own the NT-505 in a second system. It is based on the DNA from the Lumin family of streamers and uses the Lumin software with a top of the line AKM chipset. The Altair G1 is based on the ESS Sabre chipset. Both companies streamer sections are far superior to the Bridge II and the software app is no contest. I have owned a DS Sr. with Bridge II for three years so I know how the Bridge II works and sounds compared to the Lumin and Auralic streamer sections.

I think you will get much better answers if you give us an idea of your budget… it’s very difficult to recommend something otherwise.

@dawkinsj Surely Bridhge II is not great. But Bridge II is $700 and Auralic Aries G2.1 is at $4.8k. Even old G1 is at $2.7k. So not a fair comparison. But Aurialic Aries G2.1 surely looks something very interesting.

Auralic Altair as DAC comes no where close to DS Sr in performance. At that price range probably I shall try Schiit 's Yoggdrasil or BorderPatrol (both allows 15 days home demo) for their unique value proposition if I am ready to sacrifice DSD and few other input flexibility.

I am interested to try DS Sr with Auralic Aries G2.1 and dCS Bridge one day.

So you’ve actually had an Altair G1 and a DS Sr. in your system to do a comparison? Those are my recommendations from actual experience if he needs a streamer. If not then the Audio Mirror or the Musical Paradise MP-D2 Mk III-D for DAC’s only as a temporary solution if his end game is a DS Sr.

A DAC/preamp/headphone amp from Class A of Stereophile's list of Recommended Components, updated with streaming and network-server capabilitiesand it still sells for less than $3000? If you believe that, I have a bridge I'd like to sell you. (Har,...

$3,000, does everything and Roon Ready. These DACs have been very popular for years. They’ve added the Convers Digital streaming card, which is basically a Bridge II (it’s made by Convers Digital). Just add a tablet.

Apparently they have great resale values if and when you want to swap to PS Audio equipment.

I’ve owned two Auralic units and loved them both (still have one) but they’ve gone upmarket and don’t do budget stuff anymore.

The Altair G1 which is the same and avoids anything Conversdigital is $2700. 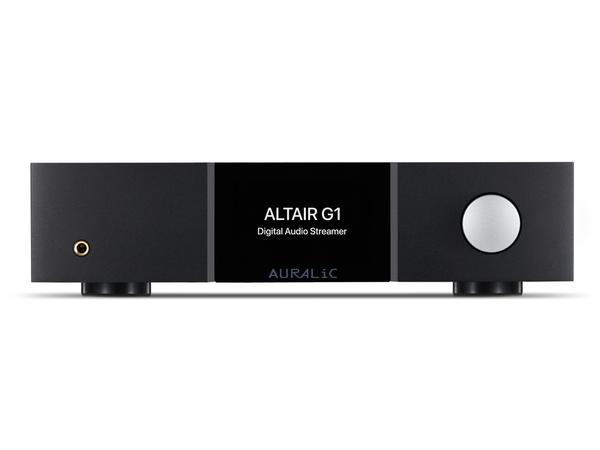 A Complete Digital Source   We designed the ALTAIR G1 to provide a comprehensive solution for the discerning music enthusiast. As a DAC, preamplifier, server, wireless streamer, and storage device, the ALTAIR G1 delivers high performance in a...

Looks a better option and you can stick an SSD inside, which I did with my Aries Mini.

I did the same with my Mini which is still in use in our house in the Carolina’s. The Mytek would force you to use the same “default” software as the Bridge II which can’t hold a candle to the current version of Lightning DS. The Teac’s default software is the Lumin app which is also first rate. The Altair G1 has gotten rave reviews from publications on both Continents.

The Mytek uses a bridge from the same company as PSAudio. So the same Problems. I had the Mytek and the DSD sounds much better albeit at a greater cost

I did the same with my Mini which is still in use in our house in the Carolina’s. The Mytek would force you to use the same “default” software as the Bridge II which can’t hold a candle to the current version of Lightning DS. The Teac’s default software is the Lumin app which is also first rate. The Altair G1 has gotten rave reviews from publications on both Continents.

So I heard. I used a full Aries with a PWD Mk2 DAC and then Devialet until it went Roon Ready. The Aries Mini was in my office with a 1TB SSD inside. My son now has it. Auralic have always been leader in the mid-market with the best software and are now taking hold in the more expensive market. The Altair G1 is great value. They just engineer new hardware and software and include it progressively in new products very effectively.

dawkinsj,
Can you compare, based on your ownership experience with both, the sound quality of steaming with the Teac NT-505 vs same on DS Sr.?

I own the Teac NT-505 also and think it’s fabulous for $2k. But I’ve never owned a dac/streamer that was more expensive.

The NT505 is much better than the Cambridge 851n in my secondary system, to my ears anyway.

Thank you for responding to my question, which, as you point out lacks a ceiling. It’s $3,000 max.

It’s kind of a hard comparison to make if you are considering them both as combo streamer/DAC’s as the Lumin based streamer component in the Teac is far superior to the Bridge II. as is the software. Just as DAC to DAC the DS Sr. is a more refined component with a slightly “rounder” sound compared to the AKM based Teac DAC section. If I just replace the Bridge II with the long discontinued Aries Mini connected via USB then distance between them becomes even greater but again we are talking almost triple the price retail and the Teac DACs, even the Reference series, are not intended to compete at that level as that is what the Esoteric DACs are for. Every upgrade on the streamer side would make the gap even wider. The Teac is a perfectly good combo streamer/DAC and in my system was preferable to the comparable Lumin which uses the Wolfson chipset. I also own a UD-505 which is just the DAC unit in the Teac reference line and it’s sound is consistent with the DAC in the NT-505 it just gives you flexibility as to your streamer choice at a lower price than the NT-505. Right now I am using the Aries Mini with the UD-505 and an Aries Femto with the DS Sr. The Bridge II is back in it’s box.

Go for a used DS Sr. without Bridge. While the DS Sr. is a top of the line product, the bridge solution is not. Instead, look for an external streamer (SOtM, Sonore, Project Stream Box S2, etc.).