Ever done anything this stupid with your audio system?

I recently got a new pair of stand mounts and have been spending some time trying to get them positioned optimally. I also have been swapping two pair of speaker cables back and forth for comparison.
Yesterday I decided to spend some serious time with the speakers and finally get them set up right. So I spent about 2 hours and during this time I thought I detected something was slightly amiss but since I wasn’t really accustomed to the speakers yet I kind of blew it off.
So I thought I finally had them set up pretty good so I decided to swap the speaker cables and this is what I discovered :^ /
Anybody see something wrong? Ignore the gray wires, they’re going to my subwoofer.

I don’t know how far I had my head up my butt when I did that but it must have been all the way. And it definitely explains the ‘something amiss’ I thought I was hearing.\ 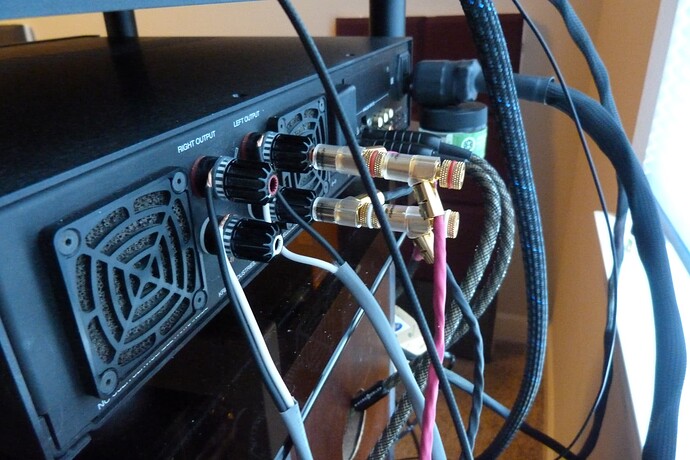 I didn’t even know you could plug another banana into the back of those Furutechs :^ /

I couldn’t say it necessarily sounded ‘bad’. Some people like mono :^ )

At least nothing blew up. I was swapping out RCA ic’s doing some ABing once, and forgot to turn my Classe Audio amp off. Blew the right channel out, and had to send it to the Great White North up in Canada, where it spent over a month getting repaired.

I (not accidentally !) put a full scale 80k test tone thru my system. In about a second I heard something that sounded like wadding paper. My beryllium tweeters had wrinkled themselves to oblivion. Along with the tweeter my grandson poked his finger thru I got the last three replacement tweeters for the JM Lab Utopia Be series. It wasn’t cheap.

That’s not mono as it should be. It’s only one channel of a stereo signal.

Feel that, Rob. I frequently feel like I should tear everything down and reset it so that I can get at the backs easier. But it always seems like a bad tradeoff with how the fronts end up facing, or where they are in the room, how far from the wall, etc. Long ago got one of those mirrors on a stick, but can never seem to find it when I need it - plus I’m really bad at working in reverse (including the ever-awkward holding of a phone in selfie mode).

This issue is multiplied in my home studio. At least I can get at the backs more easily. Even so, I’ve found I need to take well-lit photos of the backs of everything for those times I’m cutting corners by groping to feel for a set of connectors. At least then I can look at a reference AS IF I was facing it, and count jacks with my fingers and so on.

I was reading about a mic pre that has the main I/O XLRs in the front face of the unit, and I think I said out loud, “Thank You!!!”. Not practical for stereos, of course.

I am the king of stupid when it comes to my hifi.
For example, I searched for the strange lack of signal (created by the mute) for an hour. “#@** every wire is connected ##!” wtf???

I run Biwire iconoclast off the same 8 ohm taps one set of 9mm spades the other banana. I shorted spade red to black together which are huge width and must be parallel spaced forks when I had not tightened one of the amps lugs enough. When moving speaker wires the red and black spades touched at amp. Lucky for me McIntosh has sentry monitor circuit protection feature that shuts amps down with direct short wired up. It senses excessive current draw shuts down automatically once the amp gets too hot from direct short. Given the amps can output 4kw tone burst it took awhile to get hot even direct shorted.

Separated the spades and everything still played.

Doing blind connections one can make stupid mistakes. Walk behind racks would be nice

Walk behind racks would be nice

I have an electronics closet, with a rack on large casters. The closet itself is small - at the time, I wasn’t anticipating an extensive home theater system, or even such an extensive two-channel system, nor the network infrastructure - but the wheels help with that.

The rack clears the top of the closet doorway by about an inch.

I carefully roll the rack out into the hall for easy access to the cables. Unfortunately putting it back in is a bear, due to the complication of rolling over the speaker cables with 800+ pounds of rack.

The grass is always greener…

If I had a closet lining the walls, floors, doors and ceiling with Al or Cu foil draining to ground would be and interesting experiment but shortest wavelengths even cable feed throughs would have to be addressed. You could take your listening experience back 70 years without the electronic pollution we see today.

I had an entire evening searching for “something wrong” in sound quality. After 3 hours I noticed that both the REL subs were switched off. Ahhh. After that I spent another hour searching for “something still wrong even if less than before”. Recidivist! One of the two subs was switched off again.
I decided then to go sleeping that awful late night! Sometimes it’s better!

The most stupid thing I did a while ago is placing 2 pieces of mu metal over a power cable I wanted to shield against some upper components. Sometime one of them dropped on the floor covering some other power cabling.

Without realizing that, I listened and searched frustrated for several weeks, trying to find out what happened to my highs and some energy and imaging left somewhere. This was a hard time until the sound was transformed again after putting them far away to never use again. I think it was not only the closeness to the power cables but just them near parts of the equipment. Mu metal is incalculable (I recognized this before). Beware.

My cousin, she was probably 14 or 15 at the time, had received a new receiver for Christmas. She was proudly showing it to all the relatives as they arrived. A short time later I was walking down the hall and noticed smoke coming from the new Receiver. Turns out she had put a plant on top of it and then watered it…and the receiver.

Ha ha…my wife did that once Luckily is was just the cheap one we had on top of the LR TV at the time. I couldn’t believe it. She’d put a plant anywhere and totally ruined the beautiful oak top on our then $3000 Mitsubishi 35" console TV.

I broke a stylus on a Shure cartridge trying to mount to the headshell. I wasn’t careful enough. Thankfully, the stylus could be replaced on this particular model, but it cost me around $200 for an avoidable mistake.

Unfortunately putting it back in is a bear, due to the complication of rolling over the speaker cables with 800+ pounds of rack.

I feel like I need to patent this now.