Did anyone make it out to the Florida Audio expo? I made it for a couple hours today but I’ll spend more time there this weekend.

I heard the most impressive system I’ve ever heard today. It was an all MBL system, speakers and electronics. Never heard a sound stage and imaging like that. Very impressive.

I can’t also believe I’m saying this but the Synergistic Research room sounded great. Ted was in there running back and forth between rooms removing and inserting his black boxes and asking people if they heard a difference. People were just in there nodding their heads like something massive change, lol. I couldn’t detect a thing but in general the room just sounded great. It looked he had every single tweak they make in this small room so who knows what the cause of the effect was. 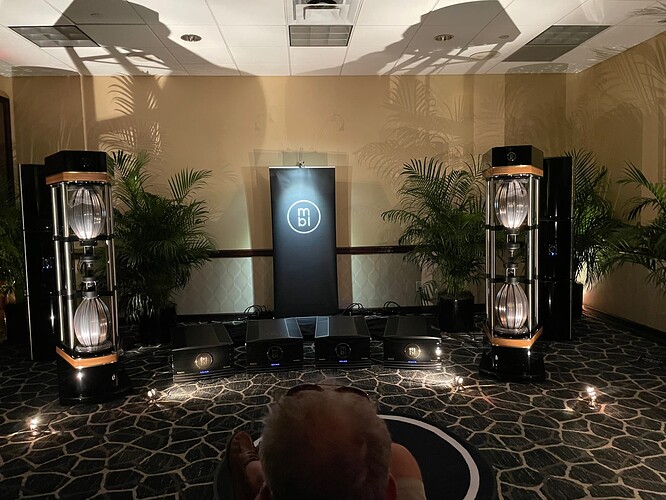 Forgot to add the SR room was using some small Magico speakers and I forgot to check out their electronics.

I was there. The MBL’s were the best I’ve heard also but at $317k, the missus said she would prefer a house if you factor in that the whole system was about $700k.
The Von Schwikerts were a little disappointing, i think the room was too large.
I missed the wallytools demo, bummer.

I’ve always been surprised that Wilson Audio seems like a vastly more popular brand than MBL.

If you guys don’t mind and get a chance to listen would be interested in your opinions of Mike’s room with the Kharma db11-s. Looks like he’s pairing them with the MSB monos.

Wow, didn’t know that. I saw mike in the room with his Vivid audios but they actually sounded much better at his shop. I’ll be back this weekend and I definitely would like to check out the MSB monos.

Lol. I was texting my wife and took a WAG and said this was a 500k setup. Looks like I still undershot. I’ve hear a couple Wilson setups that I thought were great but that MBL setup was on another level.

The Kharma speakers seem to be the “in thing” right now on his forum. But that changes fairly regularly. Weren’t the Block amps paired with the Vivid’s?

I didn’t have time to look. There were no seats except the front row and I had one of those big Vivids right in front of face. Way to loud to be enjoyable so I left fairly quickly. I didn’t know Mike had a forum. What’s it called?

As this is a PS Audio forum, i will say i was disappointed not to see anything there except for one room which was using a gain cell pre.
I can never hear the difference in the synergistic research room.

As they’re now Internet Direct and not there themselves that is to be expected. As most of the rooms are dealer or distributor involved they would have no reason to use it.

That’s a valid point. I think when i saw in the advertising that ps audio were going to be there i was hoping for a demo of the new speakers.

My understanding is due to COVID concerns PSA is not participating in any audio expositions. This was offered by Paul on this very forum when RMAF was cancelled and will no longer be offered. I believe the way PSA was treated by AXPONA organizers also contributed to their withdrawal from future Expositions.

My understanding is due to COVID concerns PSA is not participating in any audio expositions.

Yep. PSA is not yet comfortable with business travel for its crew - at least at last reporting from Paul, if I recall correctly.

Where in Florida goblue? I’m from Ann Arbor btw - I can only assume.

Understandable, I’ve been turning down business travel until recently. My employees keep requesting to travel and we’ve allowed them but haven’t made it mandatory.

Lol, I’m from Canton so very close to Ann Arbor. I live in Tampa now.

Die hard Michigan fan though. We made it out to Indy for the B10 Championship. Very disappointed in our off season with all this coaching nonsense.

UM alum (BSEE 1981) here, as well. I’ve been living in Indialantic, FL for 40 years now but still have season tickets. Here’s a shot from our most recent home game on 27 Nov 21 you might recall. iCloud

Wow very jealous. Never seen Michigan play that school down south. The energy must have been amazing there, I was even pumped watching it on tv. The only bright side is that after the game I probably took a dip in the pool and enjoyed my warm Florida weather, lol.