Further Adventures in AmazonHD BitPerfect and not so Bitperfect Playback via FireTV Cube 3rd Gen (?)

Tonight I played with my newly acquired Amazon FireTV Cube 3rd Gen (?). It’s spec’d to play a max of 96/24 PCM and most importantly for me compressed Dolby Atmos on Amazon Music. My Onkyo claims 48/24 PCM…doesn’t sound like it though compared to my Atmos BluRay’s of the same title.

My previous FireTV stick would not do Dolby Atmos music…only Video. Playing DC’s For Free and CSNY Deja Vu previously. I did a comparison of Bitperfect playback via my Bluesound Node 2i/DS1 and downsampled 192/24 to FireTV 96/24 usb out the Cube/DS1.

Yes, there is a difference but to my shock. Not earsplitting. More like splitting hairs. Does that make the Bluesound of no use ? Definitely not because the Node handles my ripped library of CD’s primarily via it’s USB input.

I’m not a Roon or Qobuz Fanboy and never will be due to their cost and my perceived ROI. Amazon’s GUI via Bluesound just plain sucks whereas with Qobuz, it’s pretty good. Audibly both streaming services are identical in sound quality. The AmazonMusic App is very good once you get accustomed to it weird navigation.

I’ve also noticed the Cube’s USB out to the DS1’s USB gives a static 96/24 on the DS1’s display regardless of what bitrate Amazon HD Music is feeding it. The Node 2i/DS1 display always changes depending on the bitrate coming from the Node2i.

Anyone else here tried this ? 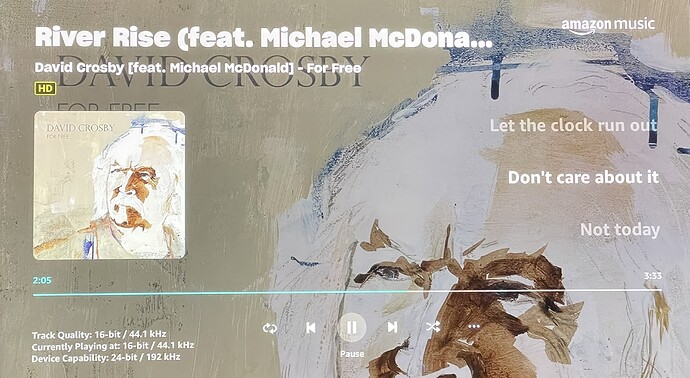 No thank you. No Amazon in my audio system please. In my home theater I have a 4K Firestick. My wife has a Cube on her setup. I thought I might be interested in the cube but after some trials I prefer the 4k Firestick. But only in my home theater. If Amazon makes music available I want NOTHING to do with it. Bah! Bah twice!

I played with sending nVidia Shield Pro audio over optical to the MKII and from our Sony TV via optical through an Anthem 1120 (it has optical pass-thru, a very handy feature). It had a nice phantom center. But I just did it in the spirit of trying it. It’s not my daily driver connection. I’m leaving it all connected in the off chance that something happens to the Anthem.

I thought I might be interested in the cube but after some trials I prefer the 4k Firestick.

Al, are you referring to the new Gen 3 Cube? If so, I’d like to hear more. I was thinking of moving to that (HT use, not for music).

If Amazon makes music available I want NOTHING to do with it.

I try my best to distance myself from all things Amazon, that includes Wholefoods as well.

As much as I agree with all the Amazon “hate on”. You gotta try something before passing judgement. I wouldn’t make negative comments about Qobuz and Roon if I hadn’t at least tried both and I have. Roon for my use case, was not as easy as flipping through my organized folders on my DLNA connected Sony UBP-X1000ES. I was an Audirvana owner until they went subscription like Roon and would not let me reinstall my 3 year version of Audirvana. I tried the new trial version for two weeks and it was no better than the version that I had and lost during a hard drive crash.

Let’s face it, all these streaming services have us by the short & curly’s.

I’m WiFi Enginner but refuse to stream audio via WiFi even though Cox “Panorama” modem is just 20 feet away from my rig !

). Except for the magnetic grille which was slightly dented on one of my Klipsch CDT-2800 In Ceiling Speakers. Fixed it temporarily with a ball peen hammer. Not perfect but it works.

Seems to be playing well this morning. Both the USB & HDMI are connected. The adventure continues…