I hope to see you

Copenhagen High End Show has been a success in Denmark, since the first show in 1997. In the first many years of the shows excistence, it has been a strong indication of the large Danish high end industry. Prominent companies like Dynaudio, Vitus, Densen, Audiovector, System Audio and many more are among the brands who have often launched new exciting products on the show. In the later years, the show has been located near Copenhagen Airport, making it an easy access for not only Danes to attend, but also for international guests who can fly in, and for Swedes, as the bridge between Sweden and Denmark is only 2 kilometres away from the hotel. This has resulted in large increase in Swedish spectators to the show, but also in attendance from both Norwegian and Swedish high end manufactures, one of the most stable being Hegel, who has attended the show for numerous years. The show also spots several international audio leaders, among them is Ken Ishiwata from Marantz.

Like the rest of Copenhagen, it is expensive to park by Clarion and in the Airport.

Clarion is placed just next to the Copenhagen Kastrup Airport. Train from Jylland, Fyn and Sweden will be less than 5 minutes walk from the reception. The Metro is directly to the door.

I’d love to, Michael but not this year. Too much going on at home. But, thanks!

I am completely aware of Paul and we are following you with excitement. But we live in the hope that our guru will come to Denmark. More love from Denmark

The show also spots several international audio leaders, among them is Ken Ishiwata from Marantz.

I saw Ken Ishiwata at High End Munich.
The way he stands there in his coat while music is playing, makes one instantly expecting he’s pulling a light sword to fight the evil

You didn’t mention Gryphon…or is Flem already owning the show?

Denmark has a lot of big names in HIFI. Gryphon is always big, but Vitus also fills a lot on the show. But within the speaker it has been the young Danish company Buchardt Audio that has amazed the visitors most recent years. Soon, it will be possible to buy the speakers in the United States. More about it at another time.

Flemming has retired a little and handed it over to the next thoroughfare.
Morthen does a great job as an importer for PS audio and makes some really good demostrations of the products from PS audio.
More love from Denmark. 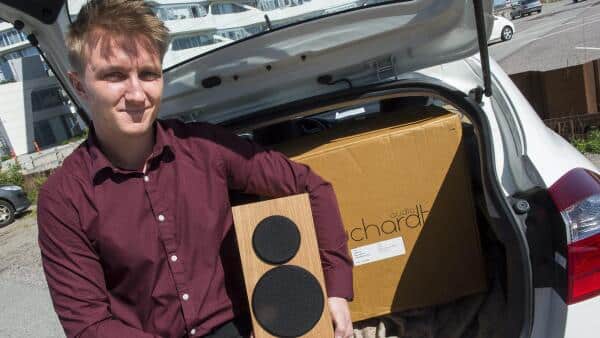 He used the best and most expensive parts inside already by then and had even better design than now imo.

Is Dali there? They teased a new passive speaker on Twitter. Said it will have its world premiere at IFA 2018 in Berlin. But maybe there‘s some first infos at the Copenhagen High End Show.

These are just the first information. Of course Dali - Peter Lyngdorf is present.

Any information about their new passive speaker you can share? Is it just one new speaker or is it a whole new speaker range? Price point? Meant as a successor of an existing loudspeaker / range?

We will be attending this years IFA show in Berlin and we will be showing the award-winning DALI CALLISTO speaker system and the DALI KATCH - We are also bringing our brand new passive speaker for its world premiere. So don’t miss out on visiting our stand - Hall 1.2 - stand 104 pic.twitter.com/8yz7WEBYmT

I’ll investigate the matter for you. If not, I promise you I will investigate it at the fair for you. You just have to write up to the show etc. and I would like to take some photos for you too…

If you sign up as my friend on Facebook then I will see if I can send a live repotage from their room in Copenhagen to you. with kind regards
Michael Benneke

You can write directly to DALI here. online@hifiklubben.dk

Visit the DALI stand at the coming IFA Show!

So it’s the DALI OBERON series. Hm, too bad. Seems like a budget series. Maybe a successor of the Zensor or Spektor series? First pictures.

Not what I’m looking for. I was hoping for a Rubicon or Epicon type of speaker. But thanks for your efforts, Micheal! Really appreciate it.