My View: Multiwave implemented in wrong way, peak not RMS ought to be maintained

I just got a power plant 10 and did some measurements.

In sine mode, output voltage (RMS) was 221 V, peak voltage then 309. All good and indicate a good sinus wave.

I then turned on multiwave. Output voltage (RMS) still 221V and peak voltage then 287 volt.

What we are told is that multiwave gives a longer charge cycle for capacitors, which is true, as its a flattened out sine wave. Problem is that what is now charing the caps in a much lower voltage.

My thinking is that peak is what matters and should be maintained, so that RMS voltage increase as multiwave is increased.

Sure, its always possible to increase output voltage (RMS) to compensate, but this seems quite wrong.

How do other people see this? Do you compensate your peaks with higher RMS when you turn on multiwave?

An interesting question. I have not seen this brought up before.

This makes sense to me. I assume in multiwave the Power Plant trades absolute peak voltage with a broader plateau of a lower voltage. As RMS is over 220V, the voltage in your area, the equipment attached to the Power Plant is charging its capacitors at an overall higher voltage than at brief peak voltage.

No, in general most power supplies fill thier caps in proportion to the RMS, not surprising since the power available goes with the RMS levels.
The charging rate is proportional to the voltage difference between the input and the caps. They charge to the same place since the charging time is proportionally longer.
Smoothing in a power supply is basically averaging the (rectified) input voltage. That is approximately the RMS …

Put another way, if more voltage were provided then less current would be available… You can’t generate power.

I guess I could have just said: a switching supply doesn’t care about the input voltage (it uses less current when the input voltage is higher.) A linear power supply has to convert extra voltage to heat which cooks the power supply caps, so providing the exact power needed is best for a linear supply. That’s simply keeping the RMS voltage the same.

Thanks for comments. But are you really sure you are correct? 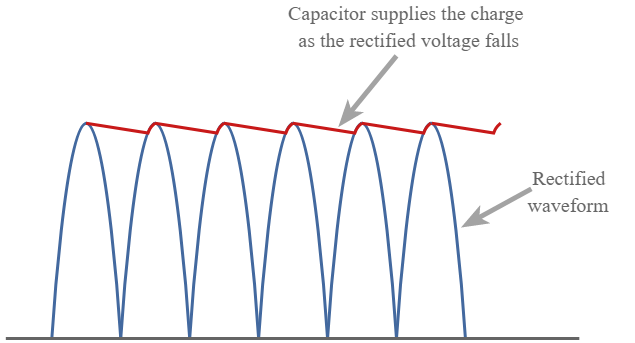 If peak was constant, multiwave would help the caps to charge quicker, maintain charge longer (less rippler) and maintain the designed voltage.

Happy to hear your comments. I happen to have a masters degree in computer hardware design, but got lost in banking, so some time since i was analyzing things like this.

You seem to assume that the caps are far from fully charged at peak. I dont think this is the case.

And you say power can not be generated. True, but the powerplan can pull it form the wall socket.

…, but the powerplan can pull it form the wall socket.

Not when you are powering a lot of components: there’s a maximum average current - and the more current you pull the lower the voltage (the wire in the wall, the circuit breakers, etc. have some resistance.) Yes for smaller components without any power hungry things there is current to spare, BUT

The expected output voltage of a full wave power supply if you don’t ignore losses in the transformer, diodes and ESR in the caps, etc. is approx. (the transformer scaled version) of the RMS input. All the caps can do is average out the voltage: if it’s high for a little, the caps need to hold it up for longer, but conversely if the caps don’t have to hold it up for a long time, you don’t need as much voltage. Linear power supplies draw approximately constant current (assuming the device being powered does, which has to be true on average.) Since power is current * voltage and the device only needs a particular amount of power all of the excess power from higher than needed voltage has to be turned into heat which is a waste and it lowers the life of at least the power supply caps.

There isn’t any need for more RMS voltage than a linear power supply is designed for, and not only that, the extra voltage it’s bad for the power supplies. (and FWIW switching supplies don’t benefit from extra voltage either, then just draw less current to get the same power.)

Anyway here’s a simulation, the thing most people don’t take into account is the transformer resistances and non-perfect magnetics: These numbers are taken from a real transformer that I used once (I don’t remember the part number but I still had the simulation file.) 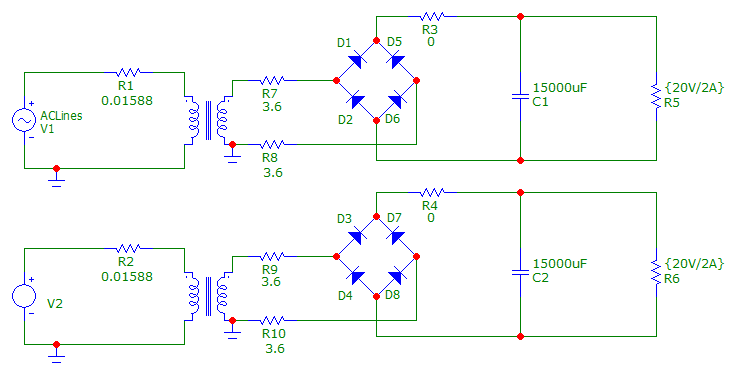 image752×382 6.6 KB
Here’s the steady state waveforms. The top is the input voltage of a sine and a square with the same RMS voltage. R1 and R2 approximate the wire in the wall. R7, R8, R9 and R10 approximate the transformer winding resistance. I picked C1 and C2’s values to cause a ripple that could be seen easily. I plot the current that goes thru the 0 ohm resistors R3 and R4 . R5 and R6 simulate the resistance of the device proper.
The second trace is the output voltage and the third the current drawn from the transformer.

Now I could have used a better transformer to get a higher (or lower) voltage from the sine wave, etc. But I just want to show that real world power supplies can’t gulp an infinite amount of current at once and so the current has to “trickle” in over time and that causes the approximate constant RMS input voltage implies an approximately constant output voltage. [Edit - also forgot to use realistic series resistance for the cap, but it would have the same approximately effect as the resistance in the transformer windings.]

thanks. you seem to have analysed this in detail. I will do some thinking and get back

Doenst this support the view that multiwave is undervolting the amplification circuits?

And yes, its a big class A amplifer I have, hence the idle power level…

Not all power supplies are alike - My point wasn’t that no system could benefit with different voltage level, but that 1) some systems can be hurt badly with more VRMS that they are designed for and 2) the power plant can’t deliver more power [long term] than it gets from the wall so it can’t do as you are asking for [long term] when it’s near it’s capacity. My 750W @ 8 Ohm monoblocks can use all of the capacity of the outlet into a 2 ohm load at 2200W, raising the input voltage would a) make them run hotter and b) not deliver enough current on dynamic peaks.

Quick question Ted… With regard to the Power Plant, say the P15, its specs advertise 1500VA maximum continuous load with a maximum Peak load of 3600VA. Since a standard 120V 15a outlets maxes out at 1800VA, how is the P15 able to deliver an additional 1800VA of power during peaks without being able to deliver more power than it is getting from the wall? I am not an electrician but I thought I read somewhere that the Power Plants are able to deliver more power than the wall can provide during peak demands.

Nothing can deliver more power on the average than it can get from the wall. But anytime there’s less than average draw for a little, the extra power can be stored for use later. The length of time a unit can provide more than average power is set by it’s energy storage capacity (heck, it could use batteries, etc. for a lot of storage capacity) and by the average power available minus the actual power uses.

It’s hard to give unambiguous but accurate specs for these things, saying that the unit can store x Joules and has an impedance of y Ohms may be accurate but not useful to everyone.

If you ignore the issue of how long it can deliver twice the power, then that spec says that the unit has the equivalent of twice the current carrying capacity on it’s output than the outlet does: i.e. thick wires with low impedance energy storage.

Seems pretty straight forward…you trade VOLTAGE for CURRENT. The total VA (volt amp) has to be equivalent or you are “creating” more power than is there…can’t be done. We can lose power, we can’t gain it. The sine wave is broader and with a lower PEAK voltage but higher current. Same amount of “work” has to be done, though.

The 3600 VA is a BRIEF max VA spike. The higher you run the re-generator steady state the lower and / or shorter that stored potential becomes. The storage caps aren’t magic, and like any power supply ripple increases as the load gets higher and higher. Light loads allow a good quick surge of “stored” energy, but once it is used, we need to store some more! At full load, there is no extra “work” to store as it is all put to use so no more “peak” VA over the walls max VA minus inefficiencies.

Disclaimer, I use a P20 at maybe 30% duty factor at 85 avg SPL running the entire system through it so I’m a light weight!

well, if not operating the wall socket very close to maximum current, can just pull more power from there, which is how the power plan operate, to have a lower “virtual” impedance than wall socket.

And my point is that since powerplan reduce peak voltage, which is scaled down by the transformer and then load the capacitors in the amp, the amp will operate with lower than designed for internal voltage. In my case, idle power with multiwave is 300 W, with sine 330W.

Yes, you can have one or the other for any extended time, not both voltage and current. Peak you could get both very briefly, but the regenerator holds VOLTAGE for you so you get a peak current to get that 3600 VA rating.

With peak here I was meaning the peak of the sine wave, not peak power use.

an interesting thing with Multiwave is that it reduces peak voltage of the electric waveform. And as peak voltage largely determines the voltage rectifying capacitors is charged with and deliver to component circutry, Multiwave typically means undervolting components, which sounds strange that this should be beneficial.

I wonder why multiwave is not implemented in a way so that peak voltage remain the same as for sine, but then with the multiwave form.

Anyone given this any thought?

I am not sure this is correct so it’d be hard to answer properly. MultiWave does not reduce peak voltage but rathe extends peak charging time, providing lower ripple at the same voltage on the power supply, not lower.

Multiwave doe s not reduce the peak it extend the time the waveform spends at or near the peak. My P-10 still puts out 120 volts AC when set to level 6 of multiwave. It gives the capacitors a longer charge period exactly as the designer intended. Yes the waveform looks wider at the top and bottom on the oscilloscope. To the untrained eye it does look like the peak is reduced.