Playing DSD-files - what to expect?

I’m playing DSD 64 files from Roon to my Bridge II endpoint, and on the DSD display it says DoP. Is this really correct? Shouldn’t it be DSD instead of taking a detour over PCM?

DoP is DSD, but wrapped in a PCM “envelope”, just like flac is PCM wrapped in a losslessly compressed “envelope”: in both cases you don’t loose any information, it’s just obscured for a little. DoP is a way of smuggling DSD thru an other PCM delivery chain. So rather than having to use something that supports 1 bit at 2.8224MHz, you can use the 24 bits at 176.4kHz path that most hardware supports.

This is correct. The DS is telling you it is receiving DoP.

Only the I2S input accepts native DSD (it aso accepts DoP). All of the others only accept DSD packaged as DoP.

It does, but the Bridge receives its DSD over DoP. It’s no worries- if it says DoP your playing DSD.

Kind of ruins the whole idea I had of using the DSD equipped with Bridge II as a Roon endpoint, connected to a central Roon Rock server and connected through IP) 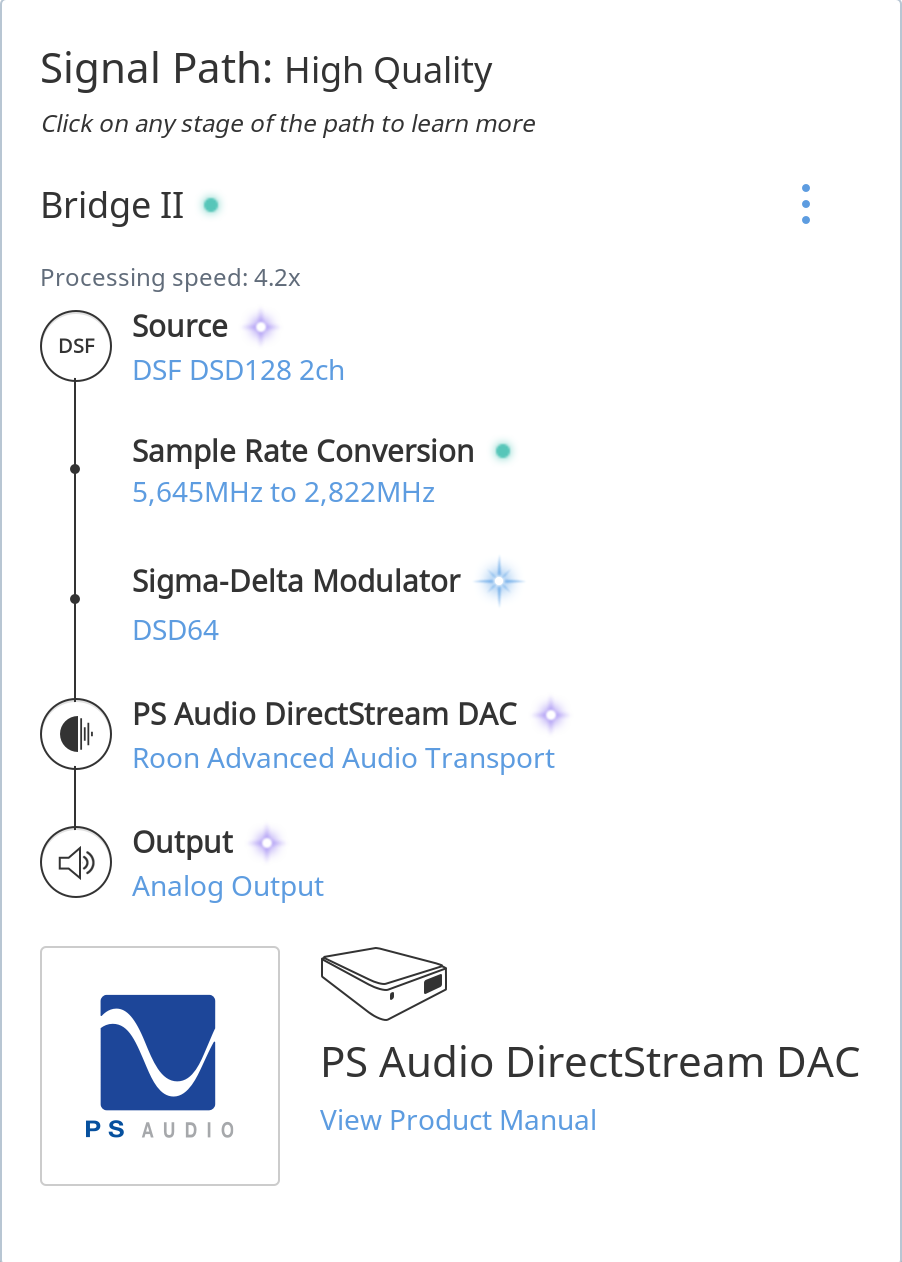 The issue of DSD 128 over the Bridge has come up here several times. Many of us were hopeful that Bridge II would support it. Paul explained that the Bridge is designed around a module sourced from Converse Digital (yes, the same folks who aren’t fast with firmware upgrades, if you’ve seen that thread); it’s a package deal and you can’t just add memory or something to make it work with double-rate DSD. An unfortunate situation, and it’s certainly logical to expect that the Bridge would support DSD 128 since the DAC itself does.

I can’t speak for the sound quality of Roon, but single-rate DSD played from my NAS via the Bridge sounds awfully darn good. So I’ve just decided not to worry about double-rate DSD for a while. I’ve never had the opportunity to listen to it on a DAC that’s anywhere near the quality of the DS (I have a little iFi DAC that I can use with a Windows 10 box, that’s hardly an apples to apples comparison).

Ok thanks, obviously I missed that info in the forum. Too bad though that this limitation isn’t mentioned in the product information…

I do agree that DSD 64, can sound very good, but pure DSD 128 that has been created directly from analog master tapes thout the detour over PCM, can sound outstanding and that’s what I try to achieve!

Too bad though that this limitation isn't mentioned in the product information...

My bad, but to my defense that was actually the first time I have seen the term “single rate DSD”, so even if I re-read the product specification yesterday I didn’t notice.

This is correct. The DS is telling you it is receiving DoP.

Only the I2S input accepts native DSD (it aso accepts DoP). All of the others only accept DSD packaged as DoP.

Even so, the native DSD on the I2s input is still converted to DoP prior to upsampling inside the DS (if my understanding is correct).