We’re back in business. Having had at least 50 dates cancelled and a concert in Paris for 11 November 2020 has already been delayed until October 2021, we had our first live indoors gig last night.

A new pre-Covid venue, set up by two guys, a conductor/pianist former investment banker, a clarinetist and the head chef who teaches at a famous cookery school is a violinist. So they decided to combine music careers with a restaurant and bringing top performers into intimate musical evenings.

They were finally allowed to open after lockdown last week and started up with Stephen Isserlis. It’s pretty expensive, so my immediate choice was Alina Ibragimova and Samson Tsoy.

So it starts around 7 for drinks, but apparently Alina was playing Bach’s Chaconne before we arrived and there was quite a crowd outside. But if you have one of the world’s best violinists playing one of the most famous pieces of music ever what do you expect?

So we got going with Janacek, Spiegel Im Spiegel and then the Kreutzer sonata, the latter performance was mind-blowing. Dinner followed and social distancing seemed to be forgotten. Then some Elgar followed by desert. Also the end of Messiaen’s Quartet for the end of time - very Covid. Quite a lot of wine.

My wife’s new best friend is Pavel Kolesnikov, who was there with friends, who we were meant to be seeing performing the Brandenburg’s in May. Thanks to lockdown he’s been doing a new show performing the Goldberg set for September/October in Bruges, so that’s a date.

Anyway, Alina and Samson then played a Schumann sonata, Alina sight-reading, Pavel filling in as assistant page-turner. Then Pavel took over, playing another two Beethoven sonatas with Alina. By then it was 1 in the morning and time for bed, I’m not sure if they played more, quite possibly, they’re all Russian so quite early.

World class music-making, everyone chatting and having fun. Not perfect acoustics, but pretty good. Buses, motorbikes, the occasional police car and a barking dog as additional accompaniment.

A great concept and works brilliantly.

I’ll have to google half of what you posted, but it sounds like a nice night!

I’m envious of places that have played by the rules and are able to safely get back to indoor events.

(The USA, on the other hand, is the Florida of countries.)

But I have to ask… I’m not seeing ANY masking there. What’s the protocol/thinking with respect to social contact indoors? Just an assumption that there’s no risk at all? Are people far enough apart? How’s the airflow? (Honestly curious about how things are being handled elsewhere.)

All staff wearing masks, quite a lot of guest mask wearing earlier on, people were not walking around, tables were well apart, lots of ventilation, but most windows closed during the music, except for 2 doors kept open at all times. Hand sanitiser everywhere, a member of staff take you to the washroom, so pretty good but probably not 100%. A warm evening so happily had drinks in the street before the start and later on.

Very few high risk looking people and to be honest Covid is incredibly low in the UK and London in particular. People are going out but mostly being very careful and staff wear masks and gloves everywhere.

Trying to find a hotel in the UK is very difficult, everything booked out till October, but you cannot just turn up at a restaurant or pub to eat. Have to pre-book everywhere.

Going again next Saturday evening, for some of this. One of the best recordings of 2016.

Great concept, and you’re lucky. I think it’ll be awhile before indoor live music comes back to the US of A. Especially as it might involve the wind instruments.

As the Pythons would say “…and now for something completely different.” A friend of mine from our old high school band days sent me this preliminary study, which looks at how wind instruments might contribute to the spread of the bug in school and ensemble settings.

Last page has an interesting risk estimator tool for a variety of exposure scenarios created by CU Boulder.

good to see live music in some form. fairly exclusive by the looks of it (not intended as a jibe, just a comment in what i read and see) it is, at least, a start

We were discussing why the Proms could not be put on with a very limited audience. The Albert Hall seats 9,000 people and 500 would be plenty. The series is 150 concerts and a major part of the BBC’s classical radio programming. They could even be done in the open air in Hyde Park. It just seems very short-sighted.

Dammit Jim! That is great.
Chas

Glad you liked it, but Mr. Elk didn’t approve and asked me to self-puff the (potentially) offensive piece.

I thought it to be a non-partisan broadside against politicians of all stripes and convictions, but since I’m basically a visitor in PS Audio’s house, I honored the request.

Sorry to be a sourpuss, but not only do we quickly get complaints when anything remotely political appears (which this clearly was), the resulting conversations and comments become insulting almost instantly.

Thus, we stick to audio - which is often sufficiently controversial to get people wound up.

Thank you for taking it down.

People get wound up over audio? Who would have thought it. I’m shocked. Shocked !!

I hear 'ya. I don’t enjoy being spoon-fed political viewpoints in plain brown wrappers, myself. But the intent was to take a satirical swipe at politicians in general, as ALL of them are suspect, IMHO.

Probably pays to be extra vigilant in the run-up to November. Can’t wait. Come Labor Day, you’ll find me under the nearest rock.

Hiding under a rock has great appeal. Well put.

(“Memorial Rock” Hwy 145 outside of Ouray, CO a year or so ago. Too big to blow up, so they paved a new road around it. A good candidate.)

Anyway, had the same discussion with several people, the return to live music really has to be outdoors. Some live ballet and dance events are about to to be stated in open air locations. Just have to avoid 100,000 people turning up.

The big issue in the EU is the expectation of a second wave in October/November when people start getting weakened immune systems in the winter. That’s a different problem than for the USA and other countries in Central and South America still yet to peak the first wave.

The big problem is the theatre, there is no exception that will return until well into next year.

good to see live music in some form. fairly exclusive by the looks of it (not intended as a jibe, just a comment in what i read and see) it is, at least, a start

It costs slightly more than going to a Premier League match, but you get dinner and it’s not over in 90 minutes.

Another group out of a job are art critics. How often does an event with 25 attendees get a 5-star review in The Times? I heard Isserlis last time he played the Bach cello suites 2 years ago, in the dead quiet Wigmore Hall, I think I’d have preferred at this venue with the traffic. 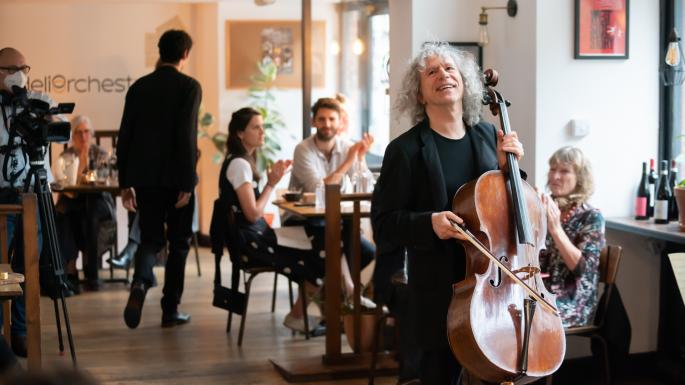 ★★★★★While our big performing arts institutions work out how they can get the show back on the road with a £1.57 billion rescue package other, more DIY outfits are getting on with keeping the music

they should attend small “gigs” more often, i could suggest a couple of folks clubs that could do with the exposure…
(if they reopen at all)

I remember years ago, small gigs at one of our local pubs which could serve 20 including 3 performers on a crowed night. Well, I do remember lots of beer followed by a winding drive home on a straight road.
Chas

My experience is the alcohol reduces social distancing awareness. In a pub I suspect it would disappear altogether.

Another problem in London is lots of students and “resting” members of the performing arts make money working restaurants and coffee shops. As many companies will be continuing home/distance working, the business for coffee shops has and will continue to be way down and they are already announcing lots of permanent closures. So plenty of younger and lesser performers are likely to lose a second stream of income. One of my son’s best friends is a theatre lighting technician and nothing is on the horizon.

So far, Colorado has allowed bars to operate if they serve food, thus considering them to be restaurants. Bars can also serve drinks for take-out! (Go figure, but this is CO where the cannabis shops were declared “essential businesses,” after all).

Anyway, one of our local venues for live local jazz has re-opened with “proper” social distancing protocols in place - masks to enter, every other table seating, staff wearing masks, etc. No live music permitted, but they have a DJ that spins jazz on vinyl. You can pick an album out of a bin and make requests. Not the same, but pretty cool nonetheless.

We’re also fortunate to have Red Rocks, which is an outdoor venue. Many cancellations, but the park is open and concerts are booked beginning this September (for now).

That is just an amazingly cool place. All I have to do is find Colorado on the map.

We have an open air location nearby. Can seat up to 15,000 picnicking on the grass. Seems Nile Rogers is booked for 19 June 2021. The setting is an 18th century park with a beautiful Robert Adam house. We walk there most weekends and I used to live within earshot of the music.

London is pretty buzzy in some areas, others are still dead. Restaurants are busy. We got a table for Pavel Kolesnikov’s gig next Saturday. He’s playing Chopin, which is good because he’s considered the best Chopin guy around. The Chopin album posted above won numerous international awards and he’s my wife new best friend.

Those are some very, very remarkable venues you have there, as well. It may be that outdoor music will be the savior of live music.

Red Rocks is cool and all, but the “seats” are a 24" deep slab of very solid sandstone, and the alotted width for reserved seating shows is 18." No padding or seat backs, so best to bring your own “stadium cushion seat” for optimal comfort.

The amphitheater is known for its remarkable natural acoustics. Back in the early days (c. 1900) traveling opera singers would perform un-amplified. Of course, modern rock shows stomp all over the natural acoustics with their monster sound systems.

Red Rocks is part of the Denver Mountain Parks system (even though it’s not in Denver proper). Tailgating in the parking lots is allowed prior to shows. Alcoholic beverages and weed are prohibited, but patrolling park rangers pretty much leave folks alone if the consumables are not visible.