My Quad 306 is way too sensitive, and the all original parts are around 35 years old, including electrolytic capacitors.

Sensitivity is easy (and a standard mod for these things,m changing one feedback resistor does the trick).

The PSU caps look absolutely perfect, no sign of bulging or leaking. It’s obviously had a very lightweight usage over it’s life, I’m tempted to leave well alone but those caps are old.

I shall decide over the next few days, maybe remove one and check if it’s still close to correct value and take it from there

Only real gripe about these things is the transformer is only bolted to the PCB, so they don’t ship too well, especially if the foam bumpers on the inside of the case have come adrift. 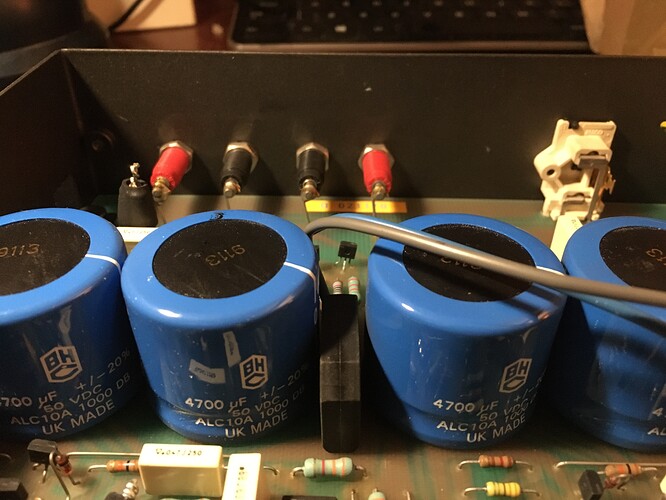 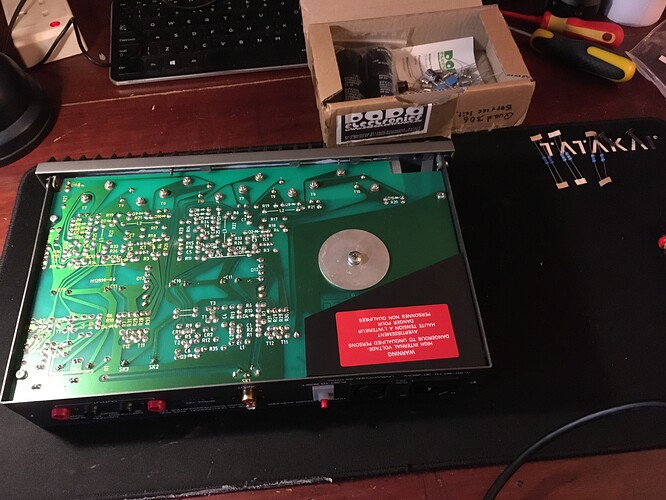 I’d replace electrolytic caps that are 35 years old regardless of their outward appearance. Hope you can find compatible caps with same form factor, etc. Does Quad still have parts available?

I have replacements already - the good folks at Dada electronics in Holland specialise in quad and sell kits of parts. Much easier than trawling through websites looking at measurements

Does Quad still have parts available

Quad actually still service them (and all their old gear) at the old Huntingdon site (though now owned by one of the big Hifi brand conglomerate so they service other brands there).

I’ve heard mixed reports as to the quality of work, but their lead time is several months (and shipping is expensive). I have a couple of the 306’s older brother the 520F (the one designed for the BBC and recording studios) and they will need doing next. 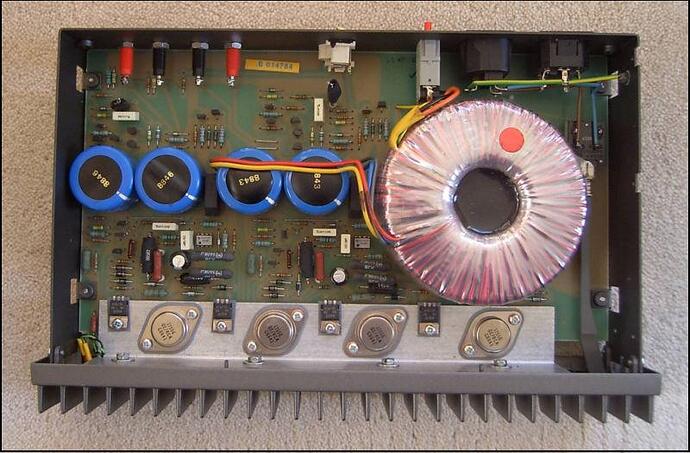 It looks as immaculate as this one off the web.

have replacements already - the good folks at Dada electronics in Holland specialise in quad and sell kits of parts.

. The reason you want to replace the caps is that they dry out as well, and even if they measure well at this moment, they become a ticking time bomb.

Beautiful amp, I loved that QUAD set. My dad bought the UHER mini set 10 years before. The Quad was a little larger but in my opinion looked better. Never was able to compare the sound. But Quad was considered reference material at that time.

Bragging to soon about the Dutch, Dada electronics are in Berchem Antwerp. Not far from The Netherlands, but it is Vlaanderen, Belgium.

Holland are only 2 provinces (Zuid Holland and Noord Holland) of the 12 of The Netherlands. Why the English speaking part of the world refers to Holland all the time when they actually mean The Netherlands? Perhaps the reason is that the central government is located in The Hague, Zuid Holland, or Amsterdam, where most of the VOC ships used to leave to sail the world, is located in Nood Holland.
But it’s like calling the entire USA “District Colombia” or “New York”.

It’s because we are ignorant (see also - learning other languages)

In many cases ignorance is good as we might loose our mind when digging into too many details that don’t matter. The above might matter to me, and not to you and that is perfectly

Kind of you to say

306 done (did change the psu caps), now to examine the 520Fs a bit more closely.
on the list of possibles: 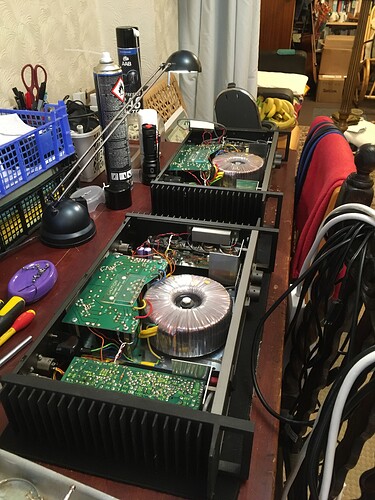 As you seem to know the difference between the hot and cold ends of a soldering iron, you get my respect. I’ve sent several 909’s to QUAD for fixed price service and re-cap, on one occasion when I sold one, they serviced it and sent it on to my buyer in Norway and saved a fortune in shipping. I once popped up there and accidentally came back with a pair of QMP’s.

It was all very organised when Rob Flain ran it, for decades, but I understand he has retired.

My ESL63 were rebuilt at Huntingdon, the seller paid £1,450 and I bought them from him for £1,200. After a month the wife intervened and they found a new home. The guy I sold them to said he was buying them for his son, but they turned up in a photo of his house (he does reviews). I was a bit gutted. Should have kept them. 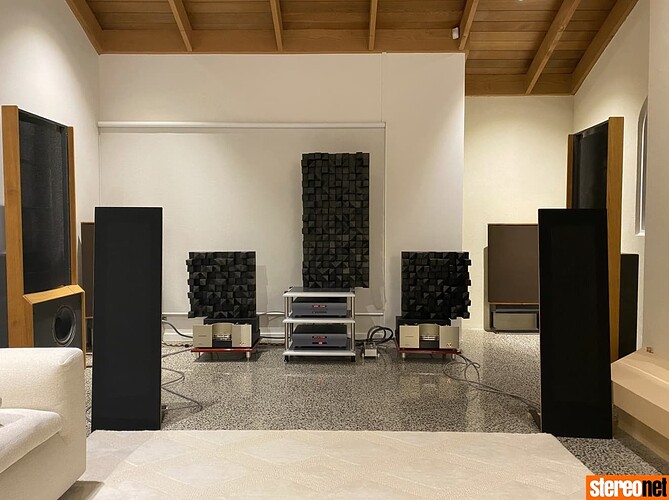 difference between the hot and cold ends of a soldering iron

I think my main talent (and this took many years to develop) is knowing when me having a go is a BAD idea, i.e. I know what I’m bad at and what I can manage - I’m probably better deciphering circuit diagrams than I am at doing a perfect job.

Somewhere on this forum is my first impressions of ESLs (the older ones I think) - plus a talking big bird and Ely Cathedral.
Wildly impractical for me, but yes, you probably should have kept them if you have the space!

Having checked the various circuit diagrams etc. (all of which are available, along with service manuals etc. online), the 306 = 606 = 909 = QSP with the only significant difference being output power and PSU size. This pleases me - the 520F is basically half way between a 306 and a 606 but with a bigger PSU, and it looks “right proper serious” too so I’m happy with them.

Having said that, after finishing the 306 it sounds so good I briefly considered flogging the two 520Fs and getting another couple of 306s - easier to work on too!
Nice to have the extra headroom of the 520 I suppose…

Despite this forum being generally “hot” for balanced interconnects (with some good reasons) no one has complained at me removing the balanced input modules (maybe still asleep / working etc. in the US!).

Suffice to say although having a balanced input is nice, most of my preampage is single ended, and building or obtaining a balanced preamp is unlikely.

Add to that, the amp (like most sensible “pro” gear) is single ended inside.

The balancing modules have a tiny input transformers (about 20 mm in diameter max), followed by a very old op amp (the only one in the signal path) - a TL071.
It also has a tantalum capacitor in series with the input (sensible to protect the transformer from DC, but not ideal).

The original designs (e.g. for 306, 606) don’t have them, it’s just a thing that’s often expected by e.g. the BBC who bought hundreds and hundreds of these things and requested the balanced option. 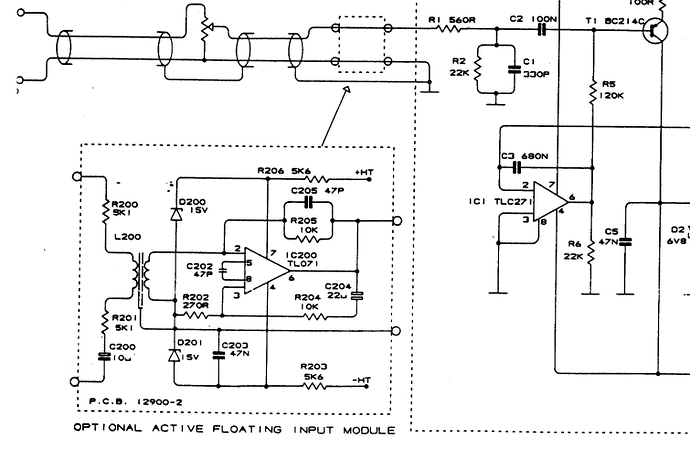 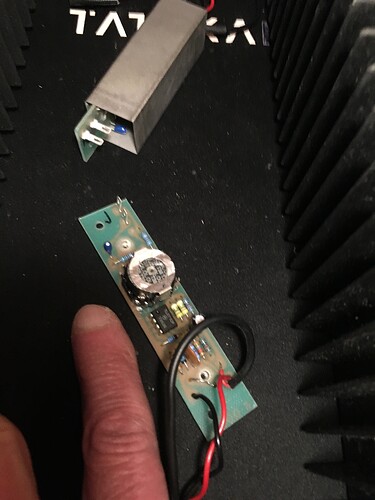 tiny transformer next to my fingernail!
.
.

So all in all I think I’d rather remove them. They can fairly easily be re installed in the future.

n.b. the TL271 in the main circuit is a DC servo only, not in the signal path.