For many years I’ve been using an old Rega Planet 2000 as a transport, first into a Channel Islands Audio DAC, and since last fall, through my SGCD. The Rega is starting to exhibit some aberrant behavior that makes me suspect trouble lies ahead. So I’m thinking of replacing it, and with the DAC in the Stellar, I have no need for a stand-alone player at this point. All of my equipment is modest, so for “proportional response” as well as actual budget reasons, I need to keep any such purchase under a grand.

Toward that end, I’m eyeing either a Cambridge CXC v2 or the Audiolab 6000CDT. They’re within $50 of each other, and each has its share of decent reviews. Anyone here have any experience or relevant thoughts about either or both? My needs are pretty simple - sound quality, build quality, and the typical, basic operational features.

I realize this involves PSA only peripherally via the SGCD, and the shallow end of the price pool isn’t visited very often in these parts anyway, but I’m open to any information or opinions regardless, should anyone have any to offer.

I have CXC and love it. You can get the v1 used for $350. The v2 is only cosmetic changes - nothing internal.

I’m sure it is, and I appreciate the suggestion, but I don’t see how a piece of gear that, used, costs more than twice my spending limit fits my budget criteria.

Wow Craig I just noticed PWTs on Audiogon for way more than I expected. Under a grand would be the normal price range but maybe these are now sought after?

If you go to Hifishark and search, used PWTransports have traded for $750-$1000US
Mine is probably 5 years old and going strong. The drives can be replaced fairly easily too.

I don’t know if it has anything to do with this, but I know anything PSA used to sell that could pull DSD files from SACDs now commands top dollar on the used market. Like I said, I don’t know if that describes the PWT or not, but that’s been the trend for quite a while.

PWT can’t do SACD’s. You can ask all you want, they are abberations.

Sony UBP-X1000ES or Sony UBP-X800 with $50 in HDMI Video to I2S adapter boards and you’re all set. Works for me. True DSD over HDMI, SACD, DVD-Audio, BluRay (Bit Perfect via the I2S input and adapter boards).

The Sony Players are cheap on the used market :
Sony UBP-X800

The adapter boards are available on eBay

My rig. Sony UBP-X1000ES into PS Audio DirectStream Sr. (I had the SGCD but never got the chance to try the I2S input but it works and sound better than Coax (S/PDIF). Since your SGCD has only one I2S input. You can use the HDMI of the green PCB but it will reverse the L & R channels. The Blue board fixes this. 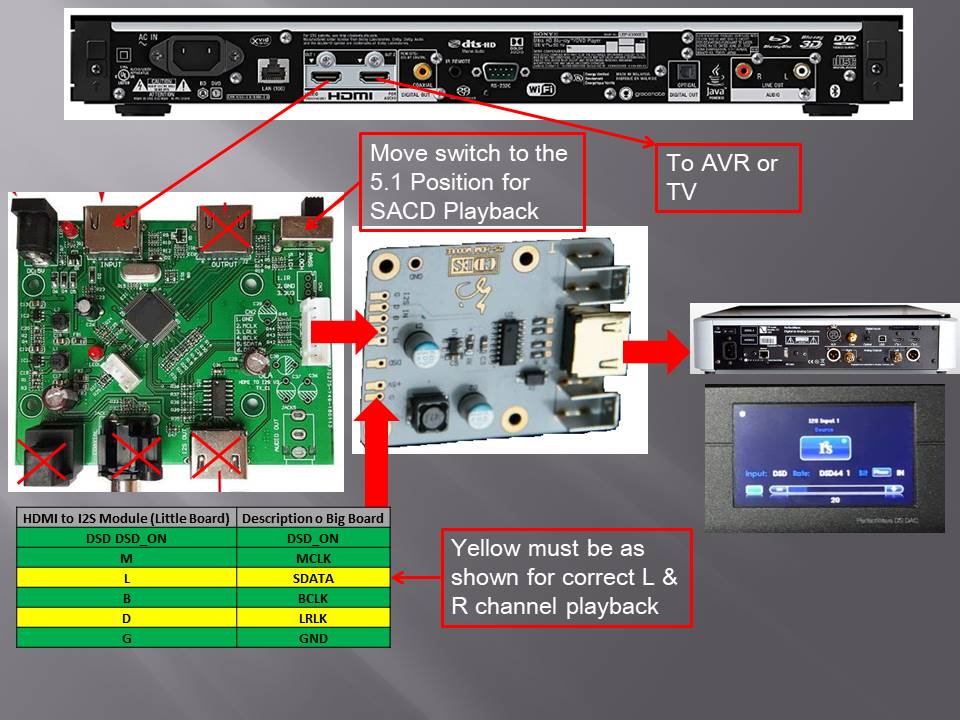 Thanks for the suggestions, everyone. I do see one lightly used CXCv1 on hifishark, though the seller says it has trouble reading CD-Rs. And there’s one on eBay, but it appears to be NOS and more expensive (about $450 US). It’s precise provenance isn’t exactly clear, so warranty issues might be iffy. None at all on Audiogon right now.

I suppose then that unless I jump right on a new CXCv2 or 6000CDT, it’s a matter of waiting for a used PWT to come along at what you all are saying is a more realistic price. I don’t have a problem with being patient; it’s more a matter of getting too busy to remember to check listings every day, which would seem to be necessary if these units are getting snatched up so quickly.

The SACD thing is interesting (even if the details of the implementation are Greek to me), but that’s not a need for this purchase to address. I already have an SACD player. I’m looking for a plain redbook transport to feed the DAC in the SGCD because it sounds better to my ear than when using the SACD player for redbook discs through its own DAC and analog outputs. I suppose I could use the SACD player for both, and switch cables out from digital to analog when I go from SACDs to CDs (and vice versa), but that seems a phenomenal PITA, especially since getting to the back of the player isn’t super convenient.

Thanks, everyone. And if any newer readers want to weigh in on the relative virtues of the two transports I mentioned in the OP, by all means please do.

I’m looking for a plain redbook transport to feed the DAC in the SGCD because it sounds better to my ear than when using the SACD player for redbook discs through its own DAC and analog outputs.

Not sure this wouldn’t be a lateral move, but I love these old Denon “universal” players as CD transports for out board DACs. It has the added benefit of being an SACD player; but AFAIK you can’t use 'em to feed DSD to an outboard DAC. I have several of these (two in service and two ready for parts scrounging). They have optical and coax digital outputs and sound pretty good with my DirectStream DAC (although, to my ears, playing digital files, including ripped CDs from my hard drive, via the Bridge II Ethernet card sounds better).

Shop around a bit. The particular listing I highlighted is a bit high with its asking price based on my experience. You should be able to pick one up for less than $500 with some patience.

check listings every day, which would seem to be necessary if these units are getting snatched up so quickly

Try the audiolab 6000cdt, it only £275 and is a memory player. I have it in my second system but if I put it in my main system, considering it’s price it holds its own against my DMP. It would be a mistake not to at least give it a try and I am confident you will find nothing better sub £1000

I agree Perry, I didn’t mention before that I had a PWT and PWD Mk II for quite some time and this Audiolab connected to the NuWave DAC in Native Mode really gets me the sound I remember from that far more expensive pair. The Audiolab with its memory buffer really does sound very good with Redbook.

Same experience here with the Oppo.