Where did you get those lights? They are pretty cool! Awesome system!

I originally had the same hue lights for behind my electrostats but they weren’t bright enough for what I wanted.

I’m BACK. It’s been months and months since I had my room. And now I’m back with a rack and new music. Hallelujah. 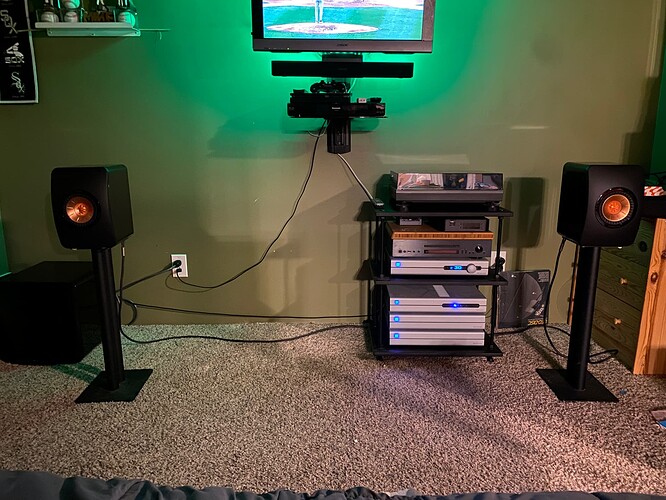 Getting my last fill of this accursed season and breaking things in again. It’s nice to see some wins, even if they’re meaningless.

I DO love having a purpose-built rack for the first time instead of a cheap IKEA table and cutting boards.

I have one of those flashlights. They’re awesome. You’ll know more than you ever wanted to know about hotel rooms. But to be fair, they also highlight “cleanser” products

took one to the cinema once, to check the seats…

Wholehearted congratulations, that’s been quite a wait for that, really pleased for you!

Mike the system looks so good like that. I still like the Stellar set, it’s design is simple and yet so beautiful.

Do you have any photos of the lights not being bright enough?
Don’t mean to be funny, just that I’m thinking these might work for me, if bright enough.

Maybe I wasn’t accurate in the description. It’s bright my big issue is I wanted it to illuminate the CLX panels and it didn’t do the best job with that. The Govee Lyra lights work better for me lighting the panels and are half the price of the Phillips hue version.

Also in the system is a…

Just a side note… The Azden EQ receives a signal, but does not pass it through to the system. In fact, I only have a single pair of interconnects going to the input of it. Nothing on the output of the EQ.

Nice system!! Is that a restored reel to reel? I listened to some reel to reel at my friends place and it made his digital system sound pretty mediocre. But the tapes are very expensive.

Yes, the RTR is fully restored, as well as the Nak DR-1 having a full “tune-up”. I also have a Nak 582 that’s fully restored. I would have that one in the system instead of the DR-1, but the 582 is so large, it doesn’t fit in the rack unless I were to put it where the RTR or TT is on the top shelf.

I would love to use the RTR more, but all I have are about a dozen old pre-recorded tapes from the 50’s and 60’s of country western, hence why I haven’t bothered listening to them.

I do however have a few 7" reels of recordings my father made of our very own 19 rank pipe organ we had in the house I grew up in on his Pioneer RT-707. I also have a couple of 10" reels, one that’s blank, and one that I recorded some Steely Dan off of Qobuz a while back, just for fun.

I would love to get some new recordings, but like you said, the tapes are stupid ridiculously expensive, and absolutely no reason for them to be that way.

The best I can do is just buy new pancakes of tape, buy some empty reels and make my own recordings from Qobuz. When I do, I want to try using the dbx 224x along with it at 7.5 ips. Do side by side comparisons with and without the 224x.

Anywho… Getting a bit off topic I think now. LOL