I thought we could use a place to discuss the Theoretica Applied Physics BACCH products.

@Vmax - can you run the Mac Mini headless for the BACCH4Mac?

Does it come with an app to run on a tablet?

The Mac version needs a mini, desktop or laptop. They just optimized the software to run faster on the M-1 chipset. You can use a ipad for display and keyboard with Apple software apps installed. I believe the ipad needs to be at least gen 4 or 5.

I will use my big screen TV as primary monitor with cordless apple magic keyboard and mouse then move it to ipad using Apple Remote Desktop app on the ipad. Then use my big screen to mirroriPad Roon off an appleTV hooked to my McIntosh MX150 HT processor the Mini can feed HDMI picture through processor too and have analog sound from MK2 fed with either AppleTV or MacMini HDMI.

We are loving every minute of our Bacch4mac intro.

One really neat additional benefit using Bacch4mac enables us to run all audio out of the Mac to the MKII. This way we can watch you tube videos and listen to them through the Bacch software and the MKII.

We like it so much we are making it permanent, we bought a new Mac Mini M2 this week, and just use Roon as our streamer.

I like what I have read and the vids I’ve watched about the BACCH. Having worked on sonar systems, both passive and active, the premise makes complete sense to me. Frankly, I am surprised this has taken so long to come about. Seeing that they are in the process of licensing the filter is a pretty solid confirmation that there’s companies like DIRAC and ARC who may be worried.

I can see this being integrated into higher end DACs and Pre or Integrated home theater boxes.

I can see Dr. Edgar Choueiri becoming the next Ray Dolby if he can make the software easy to implement and more affordable.

We paid $1K for the software version, well worth it to us, but we’re all a little crazy around here!

Which M2 did you purchase? If I do this I think I am going to get the Pro. Only because I want to get something that will have enough horsepower to handle upgrades for a good while.

If I do this I am going to look for a wireless keyboard with a built-in track pad. I’d rather not have to deal with a mouse if I am sitting on the couch.

I went apple so I didn’t have to use a USB port. But most of time the iPad will be navigating and keyboard.

My only comment about the BACCH processing is to me it is essential.
So not optional. I also think the higher cost Mac version with microphones would do the trick for anybody.

That’s all the thoughts I have for now.

This should be fun!

This is messaging with software update before they get around to explaining software update . Clever marketing. Blow your horn and keep customers sold on yearly update subscription.

The past year has been transformative for BACCH and our growing company, Theoretica Applied Physics. Over the past 8 months, BACCH has received no less than 6 awards from the audio press:

The BACCH-SP has also been recently the subject of an extensive (5000 word) review in the Absolute Sound magazine, and BACCH was the main topic in 6 video interviews:

These are in addition to the many awards, accolades, reviews, and interviews that are compiled on Theoretica’s Reviews, Press & Media webpage.

Continuing its tradition of continuous innovation and product improvement, Theoretica has released version 12.1.5 of BACCH-dSP, which has improved CPU efficiency on M1 machines, and fixes a bug in the application’s license manager. As a current subscriber to the BACCH4Mac Tech Support and Software Upgrade Service Plan, this update is free for you.

Some BACCH users (e.g, those who recently purchased BACCH4Mac) are already using this latest version (12.1.5) and can ignore this update message. However, many users are using an earlier version. We advise all these users to update BACCH-dSP to version 12.1.5 as per the instructions below.

With Qobuz and Roon installed we’ll be using this as our Storage, Server, Streamer USB to the galvanically isolated MKII.

Right now we are using a 2017 MacBook Pro and it sounds incredible… best sound ever out of our system.

Our next step up:

We are connecting the HDMI from the Mac Mini M2 to our TV.

This way we can get all the sound out of the Mac through the BACCH software via usb to mkii, and watch via tv. We are doing this now with a MacBook pro and the youtube videos sound way better. We used to love MTV and VH1 when the played music videos all day.

The next thing we’re going to do is get software for our iPad so we can operate everything, no tv, no mousse, no keypad.

BTW/ BACCH offers full value trade in/up making the next step easier. Whatever you buy gets 100% subtracted from the price of next step up.

You can do same thing within ios sphere of apps. 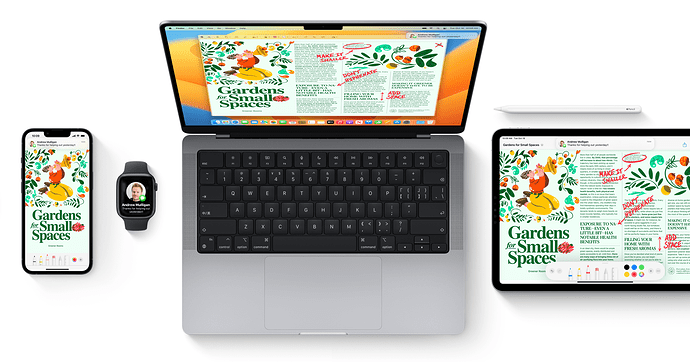 Do more using Mac with other Apple devices. Make calls and send texts, use iPhone as a webcam, hand off files, and automatically unlock your Mac.

Learn to use Apple Remote Desktop on your Mac to remote control other computers, copy files, automate tasks, and file reports.

What does 3rd party app provide that apple apps do?

Thanks for the info!

We really haven’t looked real hard for that step yet. We are waiting for the MacMini to arrive, to set it up and then see what we need and want.

We already have a wireless keyboard, and mx mousses