I’m curious to know why and how tube preamps that have up to 4 tubes will have 1, 2, or 4 tubes. Schiit’s line up includes several models with 1 or 4 (including the new and intriguing Lyr) and the BHK pre with 2. What function do the tubes have in these different configurations?

I cannot answer your question, but my old Conrad Johnson tube preamp uses 2 tubes, other older CJ tube preamps use 5, and their most recent preamps use just 1.

Some tube preamps use a cathode follower to lower impedance, it can also effect tone. A tube rectifier can also add another tube or even one for each channel, then there could also be a tube regulator stage which can add several more tubes depending on how it’s done.

on-board phono stage adds tubes as well. I had an SL1 back in the day and if memory serves it had 10 tubes. 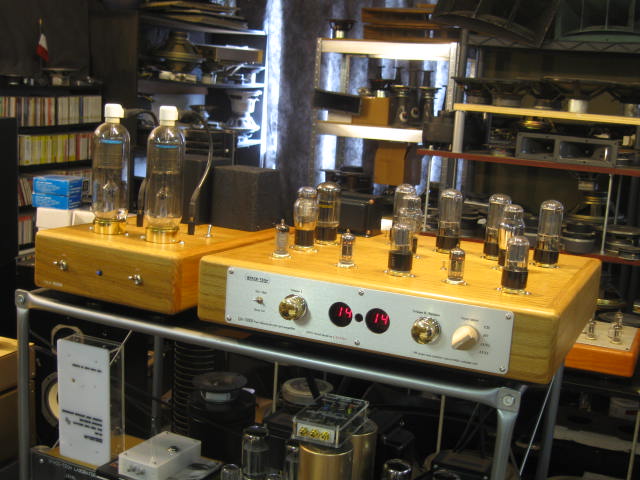 This one has 15 tubes without a phono stage

I have three line stage tube preamps, point to point wired, no circuit boards. One is fully balanced and has six tubes (not tube rectified), the other two have four tubes (tube rectified).

Modwright routinely uses a tube rectifier in all its preamp models. There is one that may or may not be in a ‘tube’ preamp, depending on whether the manufacturer settles on a SS or tube power supply. Manley uses a tube based White Follower as a buffer in the Shrimp. Other designs use SS buffer stages.That accounts for two 5670 driver tubes in the Shrimp that you likely won’t find in most other tube preamps.

Generally you’ve got a set of tubes for the right and left channel. Rectifier tubes are converting AC to DC so don’t work on a “channel” so you may only see a single rectifier tube in a circuit giving you an odd number (like the BHK600 design using 3 tubes on the input stage).

More tubes… less solid state. What that does to the sound? Some people love it. Some people don’t. But even solid state components, like opamps, sound different so component selection within a circuit is just as important to the circuit itself.

All very interesting. Thank you. I figured (why I don’t know) answers would be pretty straight forward. Not so it appears.

Allan
Obviously, you’ve asked a complicated question. Preamp design, like everything varies with the ideas of the designer. There are input tubes that amplify the voltage or current of the small input signal.
Some designers like Steve Deckert will sometimes use one dual triode input tube wired in stereo configuration for both right and left channels. Most use two, one input tube per channel.
Some designers use tube rectification (converting AC to DC), some like the BHK use solid state.
Your best chance of understanding the tube layout of a particular device is to talk to the manufacturer.
Best I can do…

Your best chance of understanding the tube layout of a particular device is to talk to the manufacturer.
Best I can do…

And that is good enough. Thank you Ron.

Your best chance of understanding the tube layout of a particular device is to talk to the manufacturer.

So let’s ask the PSA specialists how the tubes are used in the BHK preamplifier, how they are turned on, as far as I know 12AU7 is a double triode and, accordingly, how are the two halves of one tube turned on? Indeed, from the way the tube is turned on, one can understand if it is necessary to accurately select both the halves in each tube, and the accuracy of the selection of both tubes, and what tube parameters should be considered first of all when selecting in pairs.

Please tell us who knows this about the tubes in the BHK preamplifier?

You could buy matched pairs of tubes with both triodes in each tube matching, but that doesn’t mean they are going to match when in use in your amp or preamp. The best way to match tubes is in the circuit they will be used in. Tube testers aren’t going to emulate the circuit you will be using the tubes in.

What method do you use to match tubes “in circuit”?