Could the difference in diameter be due to a difference in the number of strands? My old speaker wire has way more strands, maybe 60+, compared to the Belden which has only 19 strands.

I went with the Belden partly because of reviews of cheaper 12AWG wire on Amazon that reported the wire diameter as being smaller than other 12AWG wire.

This is for rear and height speakers for my home theater, so the lengths are longer and I don’t want anything less than 12AWG.

Perhaps because the Belden 5000UE wires are thicker and somewhat stiffer that maybe (my .02 and perhaps not worth much) a same gauge but thinner stranded wire may appear to be of a heavier gauge…idk

Again my .02 is just a conjecture…just trying to shed some insight

Waymanchen’s chart is the best reference! 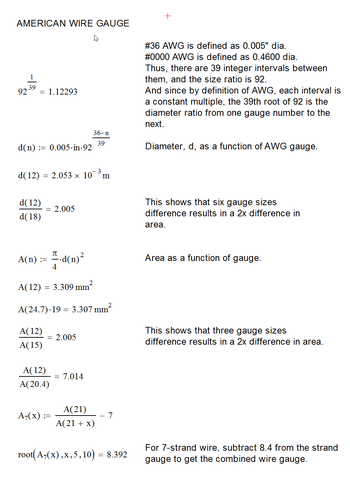 AWG gauges are also used to describe stranded wire. The AWG gauge of a stranded wire represents the sum of the cross-sectional areas of the individual strands; the gaps between strands are not counted. When made with circular strands, these gaps occupy about 25% of the wire area, thus requiring the overall bundle diameter to be about 13% larger than a solid wire of equal gauge. Stranded wires are specified with three numbers, the overall AWG size, the number of strands, and the AWG size of a str...

You’re right. Stranded wire should be slightly larger because of air gaps between strands, but larger gauge means smaller wires.

What does that have to do with what I posted???

I have wired many houses over the years with #14 (15amp) and #12 (20amp)circuits and I can always tell by feel what is what. #14 no matter stranded or solid is considerably smaller than #12 wire. So by feel and appearance, I can’t tell that much difference between stranded and solid wires of the same gauge.

This difference is so small, one might say you’re splitting hairs.

But apparently you’re both right, yes? 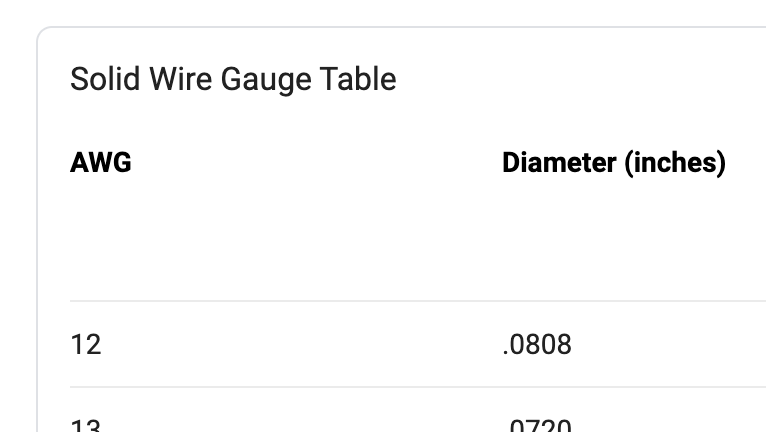 fun fact: The difference is seventeen thousandths of an inch, which is half the thickness of a human hair. So literally splitting hairs.

The material is really quite irrelevant. 12 AWG is 12 AWG. So a solid 12 AWG wire is what that chart in the link I provided says it is…

Galen…on the Belden 5T00UP 10 gauge : what are the diameter specs
alomg with the capacitance and inductance/ft and speed of propagation…

These have been outstanding performance over the years for me

Depends on the table, but the math is the same once you pick your favorite. My old Belden table is 0.0808" solid. You’ll get rounding errors with either as the error is “squared” so run the decimal on out.

Depends on the table, but the math is the same once you pick your favorite.

The PDF file in the link I provide in my previous post contains the formula for calculating the diameter for any given solid AWG. The formula never comes up with .0791” for 12 AWG.

5T00UP is a SRPVC insulated design. SRPVC is good in that it can be run thinner to keep inductance lower as it is pretty tough. It isn’t so good for RF as the dielectric constant isn’t stable like olefin and teflon.

The Vp of cable through the audio band isn’t linear, and is a BIG isue with how cable sounds. Single LARGE zip cord designs are the WORST for this as the apparent DCR is too low to adjust the Vp linearity.

I have a paper on all this on reuest with the MATH that shows what’s happening and why. This is no secret, but it is far too costly to USE the “advantage” in most systems as people won’t pay for the advantage that they can’t really appreciate in typical audio applications. Belden knows exactly what that cable tests to, how good it is, and how much it costs to get it there. Somewhere in the specs concessions need to be made.

In better systems, the optimizations of the design, Vp differential, current coherence with frequency and the target inductance, capacitance and resistance all improve the cable’s measured performance.

The part people forget, is that RESISTANCE is a PROBLEM with Vp linearity which depends on HIGHER resistance to flatten with Vp with frequency. So, we use MORE insulated and separate wires to do that but with complicated designs to then keep L and C in check.

It takes a lot to move the needle, but it can be moved to a better overall design for sure…based on REAL stuff, not marketing terms like “cross distortion” (no such thing) and many other terms I see invented with no justrifications.

I can accept LENGTH adjusted variables that are getting darn small, but REAL. When can we not hear the superposition of a better cable? We all draw that line somewhere in the sand. But, the cable’s performance is documented and valid.

I can’t accept pure BS on what cable is doing. It is truly better or it isn’t to known measure and calculation. ALL cable is.

Different copper show more differences in better designs kind of logic. This is why ICONOCLAST does not change the DESIGN, just the copper, to illustrate that point. Is the $$$ copper doing anything for you? Well, now you know in your system. When do we stop paying for the superior DESIGN, and then move paying for superior materials? We let you decide and design accordingly. You don’t have to change the entire design to change the copper.

I told you the reason, as rounding error on earlier tables will be evident. Yes, the recent tables are 0.0808". The earlier table was shown for confirmation of that fact. Also notice that the error goes in and out based on the AWG and ALL tables are rounded so even 0.0808 isn’t really “right”.

For a quick post, I used a convenient table that was indeed and earlier table but again, it makes no difference in the actual answer and the process used to get it. That was the point, not to derive the entire AWG cable and select your favorite rounding error. Continue with that if you like.

Just don’t expect your diamond die to be accurate past 0.005" for long. As long as this tolerance is held, the wire will pass UL requirements for DCR. They DO NOT measure size per say as the final judge but DCR.

Now we can go back to the regular scheduled program.

How would any mathematician round this to 4 decimal places:

Here is the formula for calculating solid wire AWG:

No, it is “right” only to the error you accept. Just like you show. The error willalso VARY based on the AWG in question.

And, the END is the process, not the beginning. UL’s wire table have a RANGE or ERROR for wire size but a maximum DCR as the final judge of compliance. A wire does not get bigger as you process it.

Use the value want. Get your car out of the ditch and see what the road ahead is really all about, how to caclulate stranded wire size. The formula for wire solid size wasn’t the topic, the PROCESS of stranded wire size was and is.

We’ve already covered wire tables, and rounding is an ERROR acceptance standard but wrong none the less. Some wire tables differ inconsequential to others. The discipline determines the accepted error and each will be different.

Neither value is “right” other than current acceptance of the error is 0.0808" for solid 12 AWG. Just like you show. You want to be right with the still technically wrong answer. And, find a wire that is REALLY a given size at the beginning of a process, you won’t, it is sized UP to ESTIMATE the process draw-down and pass UL’s DCR measurement.

We have different SIZED 24 AWG, for instance, and the one you use has to meet the overall process steps down the line. No ideal AWG wire table is used, but a process based resultant requirement table. You won’t find AWG sized wire in that table. In the real world it is meaningless. DCR has meaning.

You want to be right with the still technically wrong answer.

I am right. There is no other formula. If someone wants to label solid wire that is .0791" with a 12 AWG label, that is fine. It’s not a rounding error. But let’s not make any mistakes here: solid 12 AWG wire is supposed to be .0808" in diameter. That is the specification.

Galen, please tell him he is “right” so we can move on.