Hey @flowcharts - Yep, it is flexo anti-stat, formerly known as flexo conductive. The conductivity is interesting- there is too much resistance at DC to get a connection when you probe either side. So it’s not conductive the way any tinned copper braid would be. However it’s composed of carbon particles suspended in monofilament, which can block EMI while also absorbing it. Its affect on RF has been more of a revelation in my R&D than in theory, because it’s not a typical low impedance path for RF. But like @Vmax noticed as I did, when the sleeve is tied to ground either at one end or both (in the case of Furutech NCF connectors the connector body is tied to earth so both sides are tied) - I do both, I’m not sure if Vmax is doing that too - we hear a clear improvement. Is it now a faraday cage? I suppose it would be if it was actually conductive. But it isn’t, not exactly.

I’ve been experimenting tying the sleeve and connector body and hardware to ground for a while, and it’s now standard for the Whisper Elite model. That was a no brainer with some quick A/B listening against a similar cable with the same hours.

Just one caution- don’t use the sleeving on small signal cables. Power and speaker cables, definitely. It seems to rob the sound when put on my interconnects.

This is amazing, thanks. It’s so rare to see a vendor this open about sharing info. I’d ordered a length of 3/8" with the intention of testing on external dc cables and my server’s internal power & sata cables. I’ll have to pick up the appropriate size for some power cable testing too.

My first (uneducated, knee-jerk) thought, especially if you’re tying to ground, is that this sounds similar in concept to some ground boxes that use conductive & semi-conductive elements to absorb and dissipate RF – I think carbon powder is a pretty common ingredient here in the form of activated charcoal.

But like @Vmax noticed as I did, when the sleeve is tied to ground either at one end or both (in the case of Furutech NCF connectors the connector body is tied to earth so both sides are tied) - I do both, I’m not sure if Vmax is doing that too - we hear a clear improvement.

I am just doing a connection to ground at male plug. So really an RF drain. The RF will drain to lowest impedance ground. So IEC is only of value to connect ground for redundancy purpose if male connection is broken in theory. But i would think the carbon EMI sleeve not the best conductor so it is probably draining RF through IEC and down the power cord ground some of the RF through power cord’s internal RF ground drain.

But even just one end connection to ground is a huge and noticeable improvement.

I run all Gotham DC cables in my streaming chain. The half in 3M AB7050HF at LPS seems pretty effective and perhaps cheaper than EMI sleeve. But there is lots to learn so please share your experience. Were you going to ground sleeve to your LPS case or just let it dissipate EMI?

Alright, here’s my convoluted experience, with classic lack of any decent methodology:

I originally bought the anti-stat with the hopes of putting together a decent budget SATA data cable. My server’s fanless, powered by an HDPlex 800w, Nenon v3 LPS, Jcat USB XE, Neotech internal wiring, linear powered library ssd, all that fun stuff. I wasn’t ready to shell out for a multi-hundred dollar sata cable, so I found a few nicely-specced amphenol & 3m cables that claimed to have 26awg copper conductors, gold plated contacts, etc. When they arrived, none were the claimed specs. They all sounded worse than my 26awg no-name cable, so the project got set aside.

Using the anti-stat on dc cables came about after upgrading an HDPlex 200W (powering Jcat USB XE & library ssd) to a Plixir Elite BDC. When the HDPlex came out of the system, it’s accompanying 1m Gotham DC cable got cut in half to make two .5m cables, the first half replacing the stock dc cable running from a Ferrum Hypsos to Singxer SU-6. After letting the Plixir burn in, the stock cable powering the SSD also got switched to a Gotham – I was surprised at the improvement on that change in particular. Both cables went in with the anti-stat on though; I haven’t tested with/without.

I’d like to test grounding these cables, but this is kind of where I throw another variable in – I put together a couple of cheap ground boxes that were more or less based on this recipe on Audiogon. The first of these got connected to the server’s LPS ground post, and the Jcat USB XE’s unused USB port. The ground cables for this one were just a 16awg strand of pvc neotech & one of the unused 30awg sata cables, really just whatever was on hand. This gave some pretty mind blowing results as far as sub bass response, tonal richness & tangibility. The second box is connected to my DAC’s AES ground, but I still have to test to see if this is the best place. It’s ground cable is just two runs of 16awg stranded Neotech, and I don’t think that’s anywhere near an optimal wire guage. So the next step here is to put together some more appropriate multi-gauge ground cables.

Once I get the cable geometry and component connections dialed in, I’ll look at coming back to grounding anti-stat sleeving. It’ll be interesting to see if there’s any difference connecting them to mains ground vs a ground box.

crap. writing all this out reminds me that the monster aggregate ~9awg speakon cable connecting LPS to server is probably a good anti-stat candidate, and that could ground directly to the LPS’s chassis ground post.

I’ve been using a thin strip of small bubble wrap wrapped underneath it and a Velcro strap around the outside to keep the ring in place.

I think my bubble wrap needs viagra to hold it in place. Suffering shrinkage. What size is small bubble wrap. Seems with amp heat the bubble wrap loses its grip.

Best cable yet on my modified DS.

One more Whisper Power Cord l tweak left. Going to make a suspension isolator bridge for the amp Whispers. I aded the RF Drains but the tuning rings need better support to stop them from sliding.

Here’s my telescoping height adjustable solutions I plan to try as a heavy cable support at the Power Cord tuning rings positions. It will also solve gravity pulling the male plug from the P20 High Current duplex and with sorbothane sheet layer, I add provide vibration isolation of the power cord. I need at least 7 inches of height for the high current P20 duplex 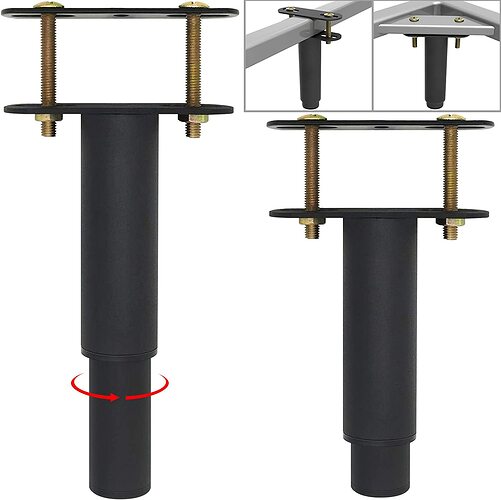 I am going to use the longer one to support the AQ Dragon HC male plug in the bottom Duplex outlet.

At 13.0 inches and telescoping it will work perfectly for wall duplex support.

Features The new T-shaped supporting foot is made of heavy-duty cold-rolled metal, which is strong and durable. The surface is painted and is not easy to rust. It is mainly suitable for strengthening the edge position around the bed frame. The...

Hopefully These will solve issue’s I have seen with bass getting sloppy as the prongs back out over time as well as movement of tuning rings with heatand vibration.

Clever. I like clever. It’s one of my favorite traits.

Tired of the drooping big power cords I thought of home built solution but the already pre-buil black paint ant ability keep cords from lateral and vertical movements. Might have to cut clamp bolts with Dremel for best look. Luckily the tuning ring positioning is far enough back cable can be arced left or right.l for upper and lower duplex usage.

Getting ready to test out the server umbilical cable with anti-stat & a drain wire. Nothing too crazy, just swapped out standard techflex for a cotton sleeve, ran the anti-stat over that, and have some 28awg Neotech silver attached to the end nearest the power supply ground post. Should be fun. It’s aggregate ~9awg Neotech copper, and carries about 37-38 volts unregulated dc. 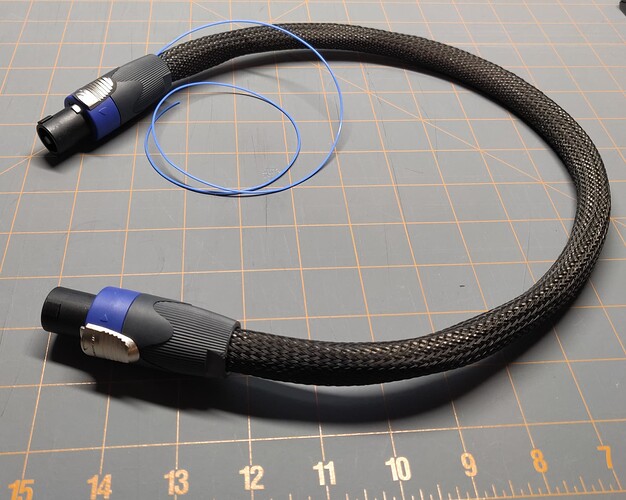 Got enough to treat a couple power cables as well, but one change thing at a time (for once!).

Really early impressions - things seem a bit more 3d and tangible. Also a small improvement in impact and tonal density. The binding post the drain wire is connected to also has one of my ground boxes attached.

I’ll be curious to see if the small run of OCC silver and Furutech Nano Liquid on the wire & connector causes any change over time as they settle-- it certainly did when used on the ground box wires. At some point the minutiae has to no longer be audible…

Thanks again for sharing & being so open about the recommendation.

Agreed. I’ve had to replace my bubble wrap. Still haven’t landed on the perfect material, but perhaps a few wraps of non adhesive open cell foam… something with lots of air in it which can grab on the sleeving and push out against the tuning collar. I do like the idea of the collar spaced perfectly around the cable.

I would love to see some pictures of these sleeve/collar contraptions, @Duncan_Taylor and @Vmax.

@flowcharts Awesome explorations with this stuff, thanks for sharing!

9awg is big— do you know how much current needs to travel that line? I love that you’re going silver neotech and 28ga for the drain. You’re thinking about RF there. So that is going to a ground box? Interesting, and maybe more effective than sending RF through the normal ground route, assuming the box presents a lower impedance.

I wonder if you could add a small gauge bypass to the ground, keep the bigger gauge for current but offer RF a more attractive pathway to your house earth as well as the obvious path to the grounding box. I’m sure it couldn’t hurt anything, and who knows, it could attract different frequencies based on RF resonance and other factors. So you’re just adding a second pathway and making it attractive to RF too. You could use the same neotech wire, and remember that it’s got Teflon, so it needs a lot of burning in. In my house I would blast the ground wires with some high wattage high frequency noise for a few days using an amp and a dummy resistor load. But waiting 500 hours works too, just not quite as well.

Or maybe you make that a bare wire underneath the sleeving and reduce the need for “forming” against a dielectric. Just some ideas.

Gotta say, I hadn’t seen that grounding box DIY project. Thanks for the link. That is a tempting looking rabbit hole! I think I’m going to have to try it.