Thank you so much for sharing. Really great to hear the initial impressions of how the DS1 compares with the DS2.

I’m primarily using i2s but figured I may as well be “running in” the USB input as well, both to check it out and in case there is any benefit to be derived from that. Hooked up an old MacBook Pro, attached a drive of tunes, ran a decent (one of those skinny red Wireworlds) USB cable from the MBPro to the DS2. I did play some stuff via the Apple Music app, but I hate that app, and it doesn’t do DSD, AFAIK.

So fired up Korg Audiogate, which I’ve used for a very long time now. It is a good sounding player, but requires ownership/attachment of one of their recorders or DACs for it to install. So that’s the sole unusual aspect about this setup. However I wouldn’t attribute any Magical Sonic Qualities to it you wouldn’t get with any other good player that handles DSD.

But color me impressed with the sound going straight from a laptop to the DS2’s USB input. Nice.

bb, Does this mean that you have a Korg DSD recorder?

Yes - the MR-1000. Got it around when it came out, so…15 years ago? Still works. Got it to rip vinyl to DSD and other tasks. Can also be used as a portable field recorder.

SOS were invited to take an exclusive first look at Korg's powerful new 1-bit high-resolution master recorders. It wasn't an invitation we could resist!

Sadly I soon figured out two things about it and ripping from vinyl.

Later got the Tascam DA-3000 which is more of a pro rack unit Master Recorder. But still the changes continued to happen to my TT rig. In any case, I felt like digitizing was like trapping it in amber. It always plays exactly how you captured it that particular time. Realized I’d rather just spin the record. I do like even some of the old vinyl rips in the car though.

bb, Been there done that! I too make DSD needle drop recordings. I currently use a TASCAM 1000HD ( the predecessor to your TASCAM 3000 ) and have a Korg 2000 setting in its box that I have been meaning to install in my system for at least 5 years now. Also, like you my vinyl system has changed several times due to improvements so my DSD copies are of different vintages of my vinyl system.

I have only had the mk2 playing for a couple of hours. It sounds wonderful but this post is about operational observations that I have mad in this short time. I will speak of some positive things first. When one goes from a DSD source to a PCM one you no longer get any tick, it is dead silent unlike the mk1. It is very interesting how you can just start a file on the computer or select a track on a disk and the DAC will automatically go to that. I will say I am not a fan of the display system and the push button system to navigate it. The input naming is not as cool as the one on the preamp where you can type in whatever you want. here you are stuck selecting from a preprogrammed list. Not allot of use of the whole display area. Rather small font for volume and tiny font for details like dsd64 or 16bit 44khz. That information is all displayed toward the right while the left side sits mostly blank except for network info, very tiny. None of the display issues matter much. I did notice the infrared receiver angle is not as good as the DS mk1. I have to now use my left hand and reach out to get it to pick up my commands. You cannot adjust the balance of the DAC from the remote. This was something else that you could do with the original DAC. I know it sounds like I am being negative but I take my responsibility as a Beta tester seriously. I hope my comments help to bring some changes to the operational code to improve the user interface.

but I take my responsibility as a Beta tester seriously

Bravo! All sound and operational observations are important.

The font for the volume does not change size and is the same size as the track on the PST about 3/8 of an inch tall. From 20 feet you can see if it is displaying 2 or 3 digits for sure. I wear glasses but have excellent vision with them and I can still see it. May not be true for some. 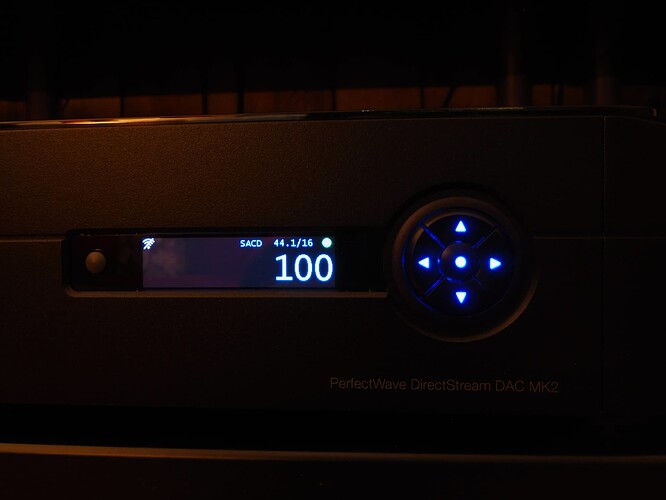 Thanks, I doubt I’d be able to see such small digits from 16’ to 20’ away. I need to control the volume of three dacs with one remote control without getting out of my seat (because CDs can vary from a volume of 70 through to about 96 with my Mk1s which have far larger digits). Paul says I’ll be able to see it but unless they go large size whilst the volume is being altered I don’t reckon I’ll be able to see it. Hopefully a software guy will read this and determine whether the screen could be taken over temporarily to display just the volume for a few seconds whilst volume is being changed and stay static for a few seconds until the volume buttons of the remote are released.

I hope my comments help to bring some changes to the operational code to improve the user interface.

Ideally, there should NOT be steps backwards w/r/t to important operating/interface functions. Dropping the big display, and eliminating the noise and software bugs that go along with same, is one thing.

Cheapening the overall usability, functionality and first-class appearance of the kit is another.

I know it’s early, but this report sounds like some of the “cool factor” might have been left behind. I hope that is not, ultimately, the case in any material respects.

Thanks for the first impressions.

One thing I noticed is volume is the default display on MK2. If you do not use a preamp, you may like this, but I am not sure if everyone will like it. It is quite bright (can be lowered) so I am sure you can read it from a listening position.

Has anyone tried using the MKI remote to control the MKII?

Yes, the remote is identical to other remotes from PSA lines. I used both old and new; they work the same.

Thanks for the fast reply. 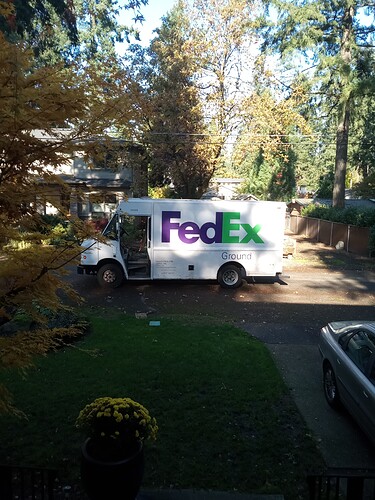 No pictures of the driver walking it up the to the door…?

What kind of a review thread is this?

Have fun. Looking forward to hearing of your experience with the new DAC. 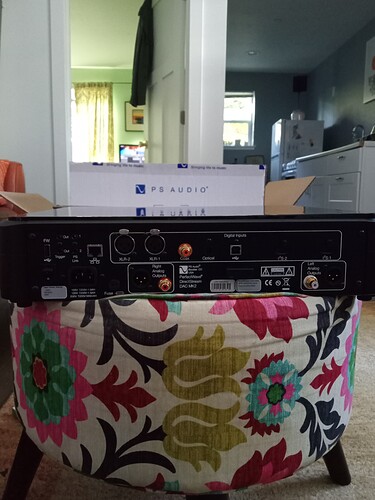