Hope you guys enjoy this–

This project started by researching adding i2s in (simple right?), so removed the crystal, added the i2s lines in, but it was just mute. Think the SRC is interfering or some logic. However got to know the circuit well, and decided to try ext. MCLK in ( may revisit i2s later, have a good hunch as to what it is now ).

This Dac’s had a good 6 year run and my reference— so I’m fearless. And the beauty is… select 96KHz on the front and it’s back to stock operation! Never used the 192KHz upsample setting anyway ( that’s why I chose to rip out that supporting clock ).

So went researching u.fl (mini COAX, to wire the ext ~max 24MHz master clock) and discovered it’s a delicate connection meant to be connected once or very few times, good for internal or a project completed and not touched anymore.

Not nearly robust enough for this.

Found theres a nice medium (SMA) connector between u.fl and full BNC… and look what I found in an old wifi router, all kinds of good stuff: (also in the pic you can see how I listened to it at first, that white mini coax going to the pi/kali/hifiberry digi+ then thru a screw hole above the DL3 optical) – if it didn’t kick ass, plan was to plop back the original crystal and call it a good attempt 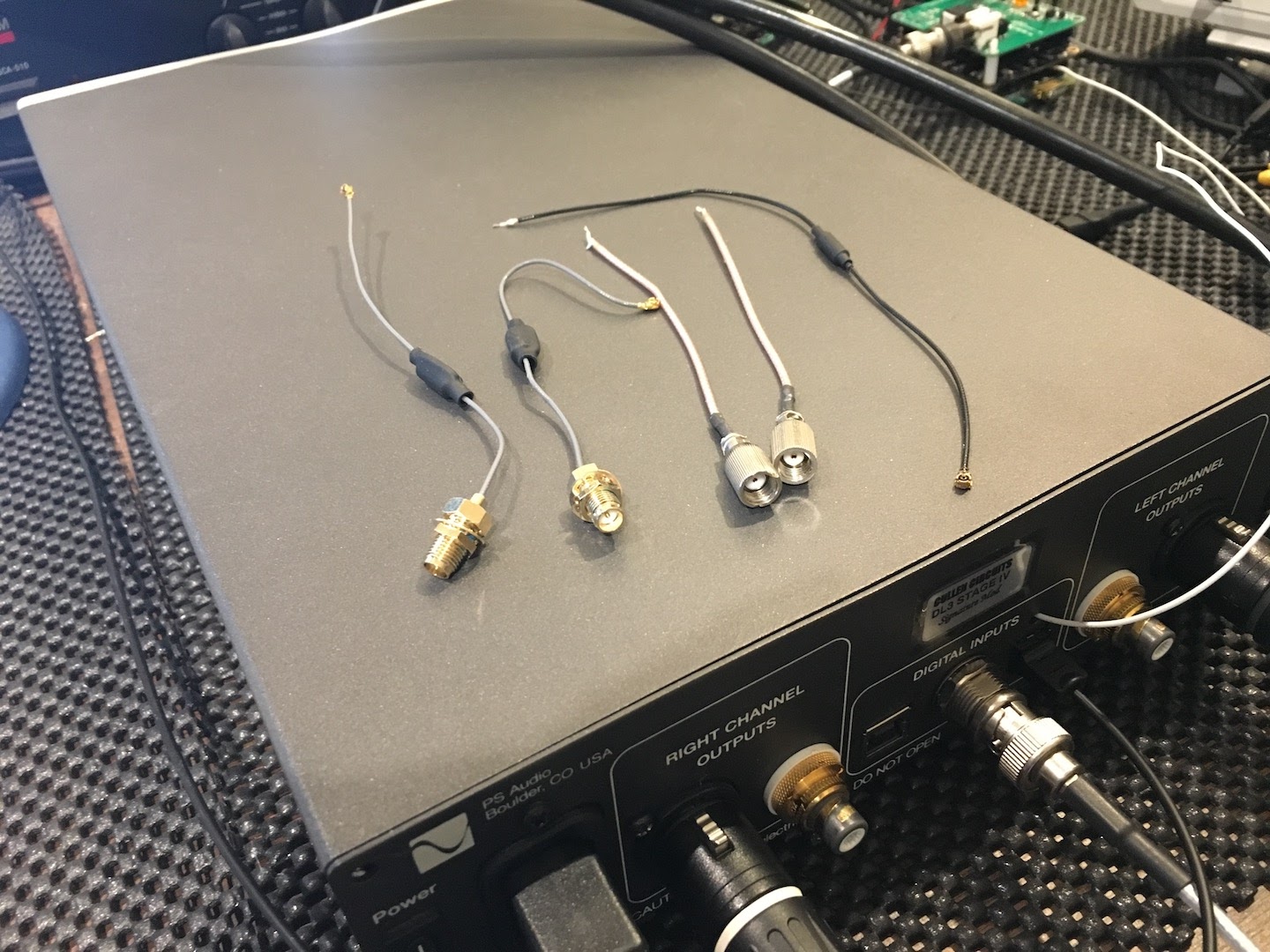 Here’s how I ended up doing it: (left the ferrite bead) Made an adapter for pi headers: (working on a stock digi+ pro) 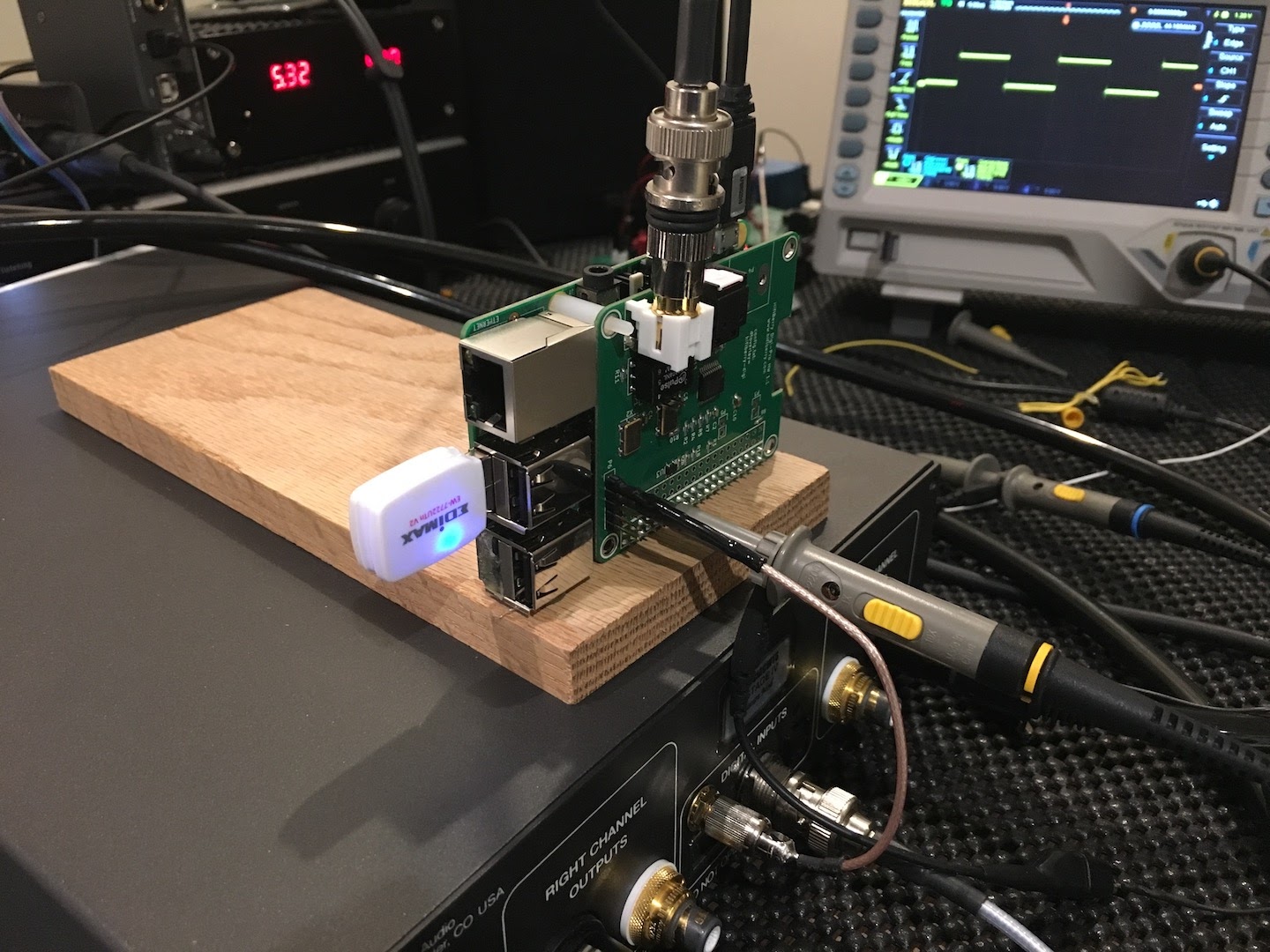 Made an adapter u.fl to that medium coax: (my slaved digi+ on a kali – kali does have a u.fl for MCLK underneath, attached there and strain relieved)

(also the kali MCLK goes into the digi+, see the GPIO pin29-pin36 connection – and digi+ clock is removed) (the slaved digi+ means the SPDIF creation is driven by the same kali MCLK) 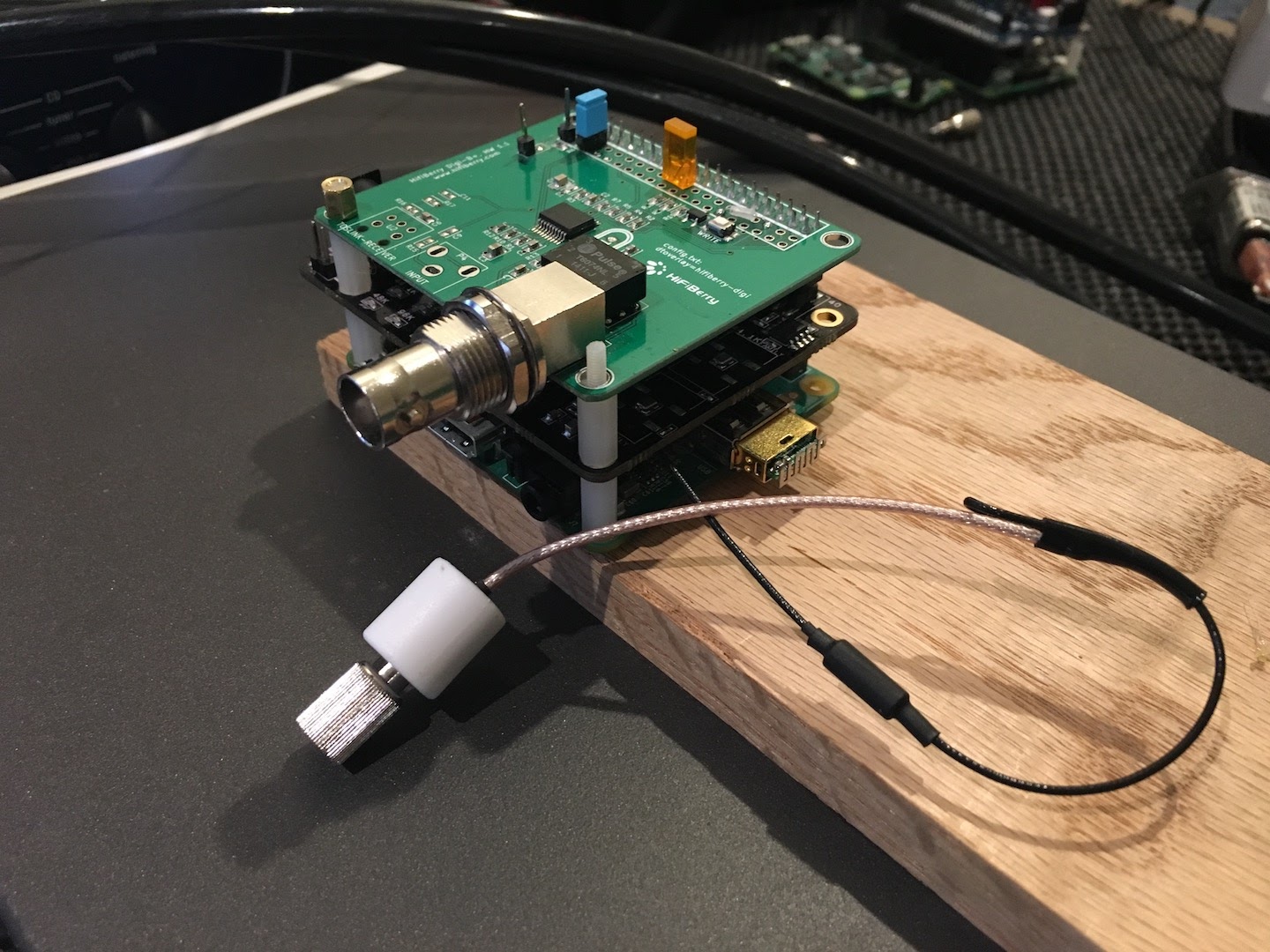 After listening for a week with the lash up to the kali/slave Digi+ (using the wifi coax cable) just had to make it permanant it is such a fundamental jump in sound quality! FYI the Kali’s an FPGA i2s clocker… takes a buffered chunk of i2s, and clocks it with flip-flops at the FPGA output (scope measure 3ps jitter, from a pi !!!). Tons of separate regulators & ground filtering also. 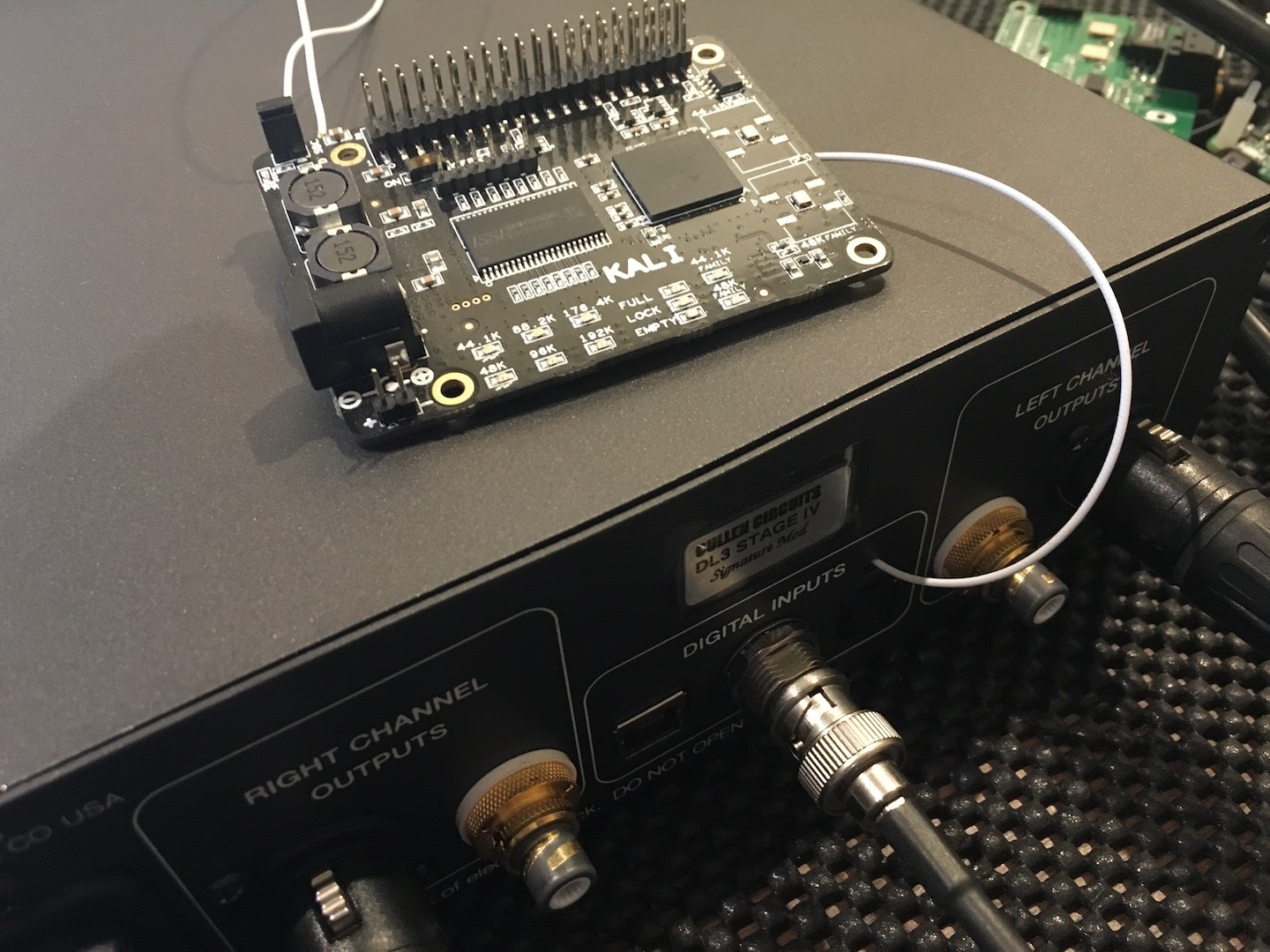 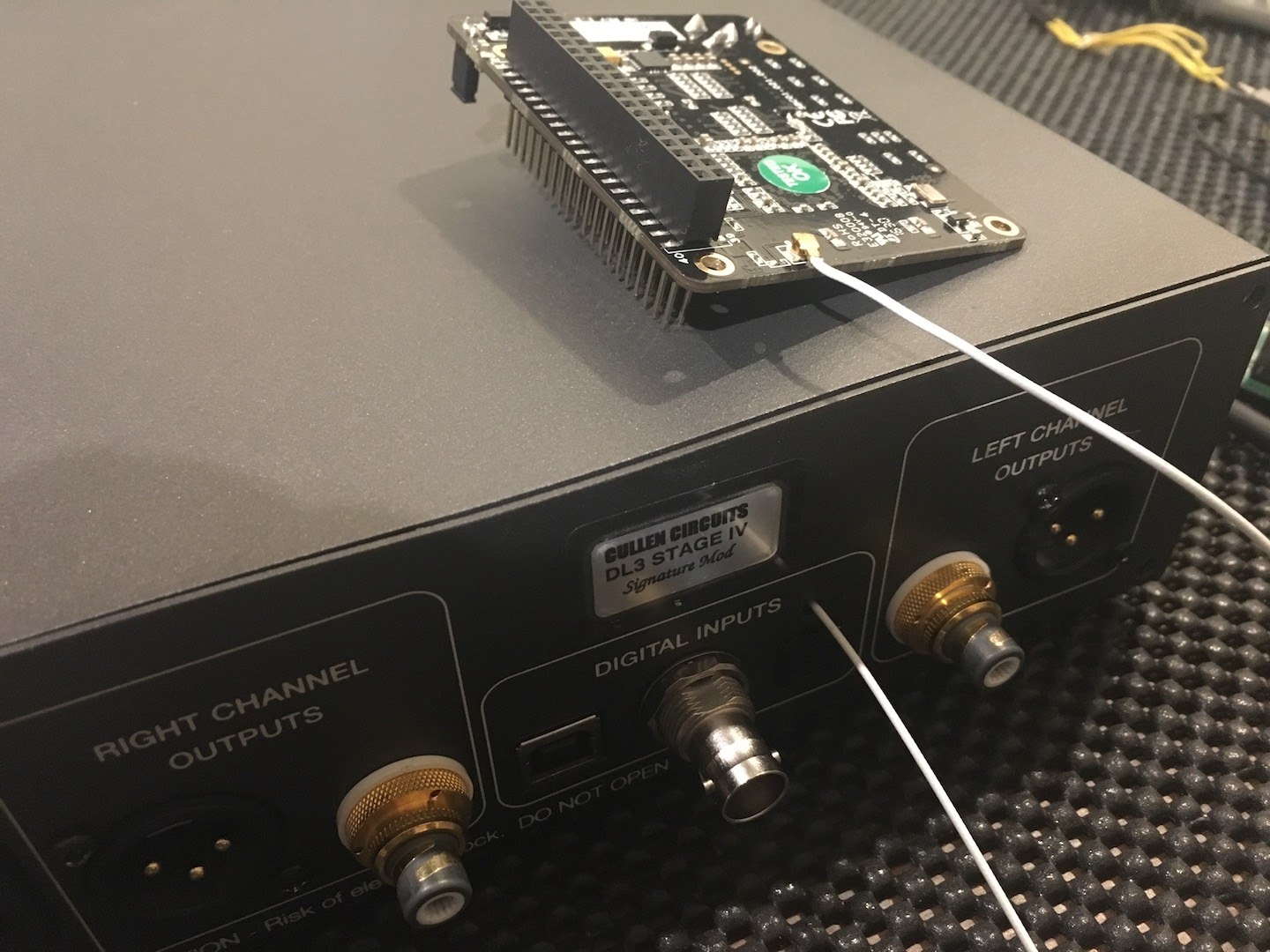 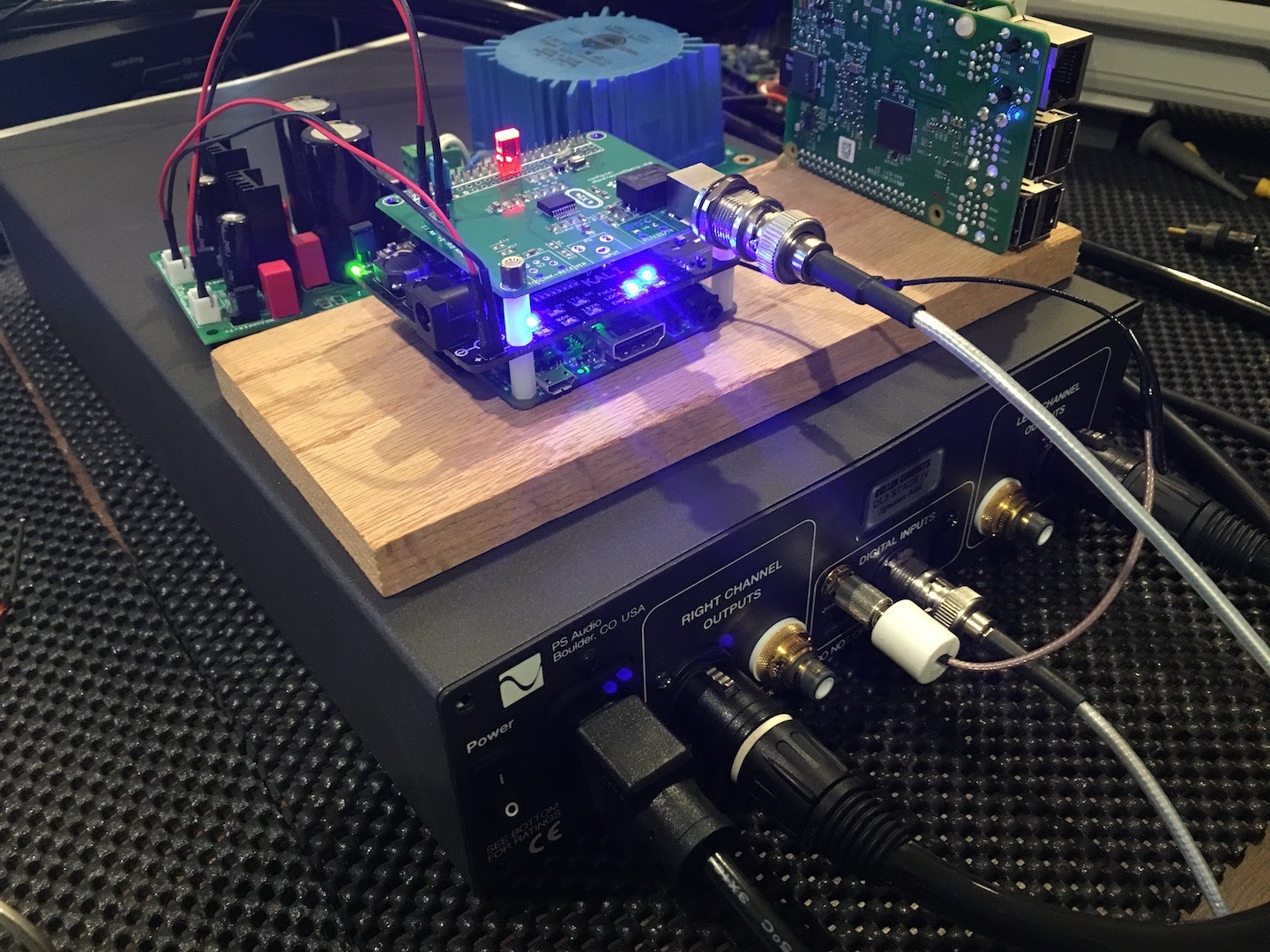 Any thoughts or critiques please? Or make fun of my ridiculousness? Honestly tho… this came together quick, I like the practice also.

Is it the single clock domain (source), instead of 2 (source/dac) giving such a difference?

It was fun analyzing the i2s on the scope, attached one channel on the dac (internal i2s), one on the source (i2s)… and you can see the deviation, and jittery in relation to each other… now everything’s in lock step.

Very interesting hanging onto this Dac, and seeing what can be done… instead of tossing it or blindly upgrading-- have other sources, great to reference them to each other (thru listening)

Next post a bit on what happens with upsampling now, and the SRC4192 sample rate converter BYPAS mode.

Wow, you’re very skilled to have done all this. Good work! Keep us up to date on your progress.

Remember back to the PerfectWave Dac MarkII -->

The new digital board had something you called “analog switches”.

Are those flip/flops, or simple logic gates to realign/reclock i2s, or something else?

May I ask what the actual component is, part #?

They are logic gates and instead of using digital saturation logic we used analog gates so they never went into saturation (because you cannot accurately predict when they will come out of saturation). I don’t have the part numbers in front of me, sorry.

They are nice because they don’t have a polarity, they will pass analog signals without a lot of distortion, etc. But you do need to plow thru the datasheets to find the most appropriate ones for your needs.

[Edit - Paul and I were typing at the same time.]

The difference between Pavane and Adagio is going to be the delta in the preamp used with Pavane, otherwise those two dacs are identical. With...

I rarely hear any talk about DACs built around Analog Devices chips. There's plenty out there about ESS Sabre chips and AKM chips.... Wondering if...

Just FYI for fun… thought this might sorta be the DLI (was hoping on the blind buy) as in the great granddad to the DLIII… but, seems, complicated.

Bought this after talking them down (under 100 bucks) while buying (just 1) vinyl haha, was sitting there at a record shop of all places. (still like digital better ;D)

…and ^ grrrr all my borked pics above

Anyway, would enjoy any insight.