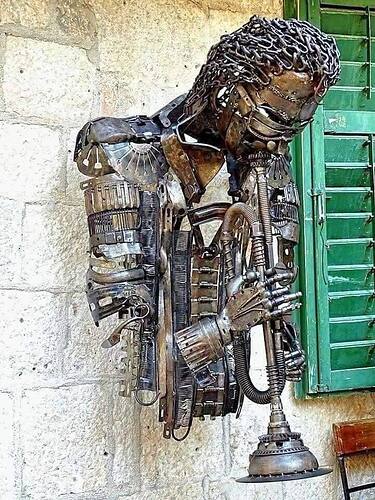 Neat… but honestly, I think he should have been represented in what he wore throughout most of his career: a Brooks Brothers suit. He was proud to dress well as it was important given his race etc… he wrote about this in his autobiography. His later flashy/African garb came later and was driven by his wife at the time.

I do not see any specific garb in the sculpture, although it hints at many things.

I like the energy, capturing Mile’s posture and playing style. I also like how it is mounted on an outdoor wall.

Yes, I guess it matches Miles more than the idealized Miles, but we’d have to count the years when he was which Miles

Could be the same with Michael Jackson and so many.

Early Miles, later Miles, it’s a terrific work of art that I would have in my house.

I, too, find it wonderful.