I recently received a Stellar Power Plant 3, purchased new from PS Audio. First off, I am extremely happy with the performance sound wise.

An issue I am having, though, is the “Output Status’ LED (LED furthest left) seems to only show blue. I have tried turning it on and off, idle/on, swapped in and out various components with various draws, etc. Regardless of scenario, the status remains blue.

My understanding is, the 3 normal function colors should be either, green, yellow, or red.

The manual lists a warning status that involves blue, but that is blinking blue/red. (DC detected on the output)

Aside from the above, the unit seems to be functioning normally.

Is there possibly either a warning I am not finding or possibly an incorrect LED itself?

Thank you for any input. Baffled

My understanding is you will see other colors while running if there is an issue.

Also, if you do a hard restart (turn it off in the back and back on again), you should see a green LED as it progresses through the start up process.

Hello, thank you for the quick reply. Yes I tried a hard restart as you described. No effect.

According to the manual, if functioning normally/correctly, it should be showing steady green, yellow, or red. Errors seem to all have a blinking behavior

I did not realize this was true.

FWIW, my steady-state status is always blue as well.

Did you see any other colors during start up. IIRC, the unit flashes green during startup before settling into its steady-state.

Maybe others will chime in. I am going to check the manual.

No other colors have displayed.

Let me know if I missed something in the manual. Interesting that yours does the same

I believe you have misread the manual. Here is what I found:

*The Stellar PowerPlant 3 has a maximum output power of 300 watts. The Output LED *
on the front panel of the P3 will glow either blue, yellow, or red, depending on the output
power of the unit.

When the LED is glowing solid blue, the unit is pulling up to ~90% (270W) of the maximum output power.

If the LED is glowing solid red, the unit is detecting power over 300W. The unit will go into fault mode when power exceeds 330W for a continuous period of 30 seconds.

When the unit is in bypass mode, the output LED will be off.

Check the section of the manual titled, “Output”.

The indicators for ‘MultiWave’ and ‘CleanWave’ should both be blue if active. This is the case with mine.

Ahhhh, I must have a newer or older manual. Mine lists green instead of the blue yours mentions. 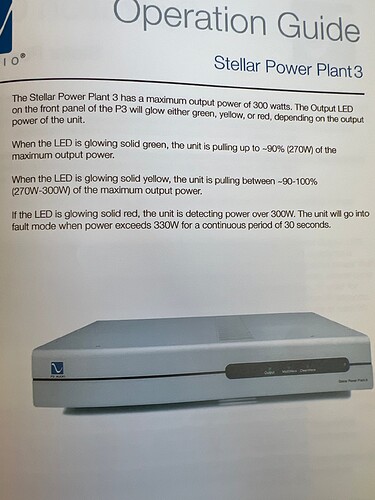 Are you loaded up (in terms of the number of things plugged into the unit), such that a Blue output LED should make sense in your case?

My P3 purchased 8/2020 always shows blue as its steady state of operation, same as Scotte’s unit. It’s always blue as my gear plugged into it would not pull over 90% load I’m guessing. If I turn off the switch on the back of the P3 then on, the blue LED flashes red for a very fast second. Maybe PSA dabbled in a green LED for a period of time after that?

My P3 purchased about three months ago also shows the steady blue. I looked at the pdf manual on the web site (Rev C, 2021) and it references the green LED and the cover photo shows a green LED so there must have been a change at some point. I’m not at home so can’t check the manual that came with my P3. I think PS Audio needs to address this, jamesh are you out there?

Thank you for confirming. Yes must have been a different version. Had me completely baffled. Still confusing.

I just received a new one with the same confusing green up to 90% message. The dim button on the remote took care is the problem.

Spoke to Aron (at PSA) this morning and mentioned this. He said, yup about a year or do ago they switched to the blue from the green.

Still works as the manual describes except the green status is now blue. (Then yellow, then red)