I debated about putting this elsewhere in the forum but it is a question about music, after all.

I am curious to know what you think is the best (or favorite) example of recorded piano that you use to evaluate your system. Not necessarily your favorite performance or composition but strictly with the sound in mind. I keep coming back to “Horowitz in Moscow” 44/16 on DG. I also like the music, but I like this recording’s balance of percussion, warmth and ambiance and it has become an old friend. It might be a little short on the warmth/bass power end of things but it is one of my “frequent flyer” albums for sorting out system changes.

I really like the recordings of Angela Hewitt, but love her interpretations of Bach so I am biased to like the sound as well.

Piano is a killer reference if you know sound of the recording well.

“Piano is a killer reference if you know sound of the recording well.” - Elk

Agreed. Which label and resolution are the ones you refer to?

That’s the problem. I have not listened to see if any actually sound good, they just happen to be ones I know well.

One example is Ms. Hewitt’s recording of The English Suites (two CD set). The sound is nice, a bit more distant than I would prefer, but I know them.

I’ve found both the violin and piano in this recording to be very close to sounding “real” to me. I’ve heard these pieces played live and through some lucky circumstance the musicians, instruments, and venue led to a sound that mirrors what’s on this CD very closely. Figured that must mean the CD was engineered rather nicely.

I’m fond of the Mari Kodama Beethoven sonatas from Pentatone. I once had a piano tuner over and he asked about my system so I played one of them: he stood directly between the speakers, closed his eyes and cranked the tar out of the system. He told me which Steinway was used (I verified it with the liner notes) and how he loved hearing the mechanism so clearly. He said it was like sticking his head into the piano at a concert

I love hearing both the mechanical noises and being able to hear the percussive attack of each note; a piano is in essence a percussion instrument.

It is a difficult balance where to place the mics. A piano is a loud instrument, designed to project, and the sound needs a chance to bloom and blend with distance. But, it also makes wonderful sounds up close. There are dozens of ways to mic a piano - all legit.

Yes, Elk, and so many botched or “less than stellar” examples on otherwise great recordings. I take it that the end product is very elusive. In comparison to the other musicians on “Kind of Blue,” Bill Evans’ instrument is just not done justice, IMHO. Even on “My Funny Valentine,” from “Waltz for Debbie,” which is one of my favorite tracks… ever, the piano sound could have been better. Not that it takes anything away from my enjoyment of this piece, which I think is a monument to musicianship and collaboration. Even the reel bump near the end can’t mess this one up!

Piano has so many subtleties that can be missed by the engineer that sometimes I think it’s a wonder that we have any decent examples at all, which is why I started this thread.

Tony, I have that one. I’ll give it a “spin” today. Funny, I’ve spent so much time listening to Bell that I can’t even remember what the piano sounds like! I’d say that I had musical blinders on, which I guess makes some sense, at least contextually.

Thanks for your input guys. Don’t be shy!

@Tony22: Yes, I like the piano very much. Thanks! Funny how I had overlooked this for so long. Damned stringy things. Always in the way.

Good stuff. Ironically it was Hilary Hahn and a piano accompaniment who I heard play some of these pieces live. Completely different technique and all, but when I can home and put on this recording afterward (the same evening) I was struck by how well it portrayed many of the same mechanical characteristics - overtones, string proportion vs body. The sense of what I heard live was there.

Any recording in particular? She has quite a catalog on Pentatone.

Well they are all recorded well: I’d pick the ones of the music I like best. (Or just buy the 31Gig download of the set of 9 Beethoven Sonata SACDs: http://www.pentatonemusic.com/beethoven-the-complete-piano-sonatas-kodama

Pentatone has a “club” and it gets you 20% on all web purchases.

She ends up on two demo disks:

My first SACDs from her were:

I will grab one.

I should have added that Pentatone delivers SACD iso’s which I think is the way to go: but some others prefer other formats, you can find many Pentatone recordings as DSF or DFF files at HD Tracks, Native DSD, etc.

I also like very much the Chopin piano concertos played by Ingrid Fliter:

For those who like Mari Kodama’s Beethoven, NativeDSD is having a 10% off sale on these recordings through the end of the month (well, actually May 30 IIRC). Use the code ‘kodama’. You can get standard DSD here, rather than the ISO files from Pentatone’s original website.

I need to state up front that I don’t like the pop or rock performances of this composer, and don’t own any other recordings of his. But I like this one and Richard Joo’s piano performance and the way it is recorded . . . is phenomenal. 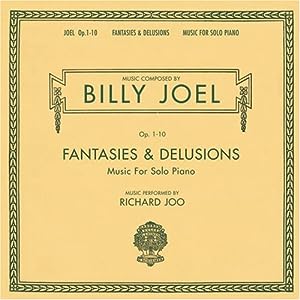 Seeing this really got me going. It’s good to know that the performance and sonics are well done (thanks lonson). I haven’t heard the music, but I know that Billy Joel grew up studying classical piano, so it’s not hard to believe that he is capable of writing some good music in a classical idiom.

BUT – those of us who grew up studying classical music often played from the Schirmer editions which have (ever since the company was founded, I think) always come in yellow covers with the same typeface and ornamental borders. In the 1970s when I got some, they looked a little old-fashioned. The editors often took more liberties with the composer’s text than would probably be done today. But they were cheaper than the European imports and there was no mistaking them as you browsed at the music store through the various editions of whatever you were interested in learning. (Yes, children, larger cities once upon a time had such stores . . . )

So when I saw this CD cover, I first thought that someone was playing a joke by putting out a CD with the traditional Schirmer design, with Billly Joel’s name in the frame where one more often sees Bach or Beethoven; the title of the work also suggested to me the idea that this was not to be taken seriously. Some checking online, however, shows that the music has in fact been published by Schirmer/Leonard, in the traditional cover.

Maybe the publisher automatically put Joel’s compositions in their traditional garb for classical compositions, since the pieces are in that style. But did they not realize how doing so might convey an impression opposite to what was intended? Or were they trying to tell us that these pieces do really belong in the classical tradition? This is a fascinating case of the medium is the message (or not . . . ).