I bought a new P12 last week,When i switch on the P12 unit, the fan will start up a moment then slow down the speed and the fan is still running, this is the new feature in 2.11 fw?

I have a P12 myslf…and yes the fan will come on briefly and then slow down
my amp is high bias and when I 1st turn it on the power meter may quickly momentarily jump upt to about 500 watts then instantly settle to about about
220 watts there abouts; even very loud fff might move watt meter on P12 to
between 350-450 watts…fan will come on…

Btw what all is plugged into P12?

Sorry for my typo, that’s mean i testing the power cord for my p12 then power on or off the unit, instead of sometime shut down the unit.

I just pluged dual mono two of devialet 200 in P12 Hc socket, but the fan still running in slow speed, so i want to know is it normal operation ? Or the fan should be not runing ? 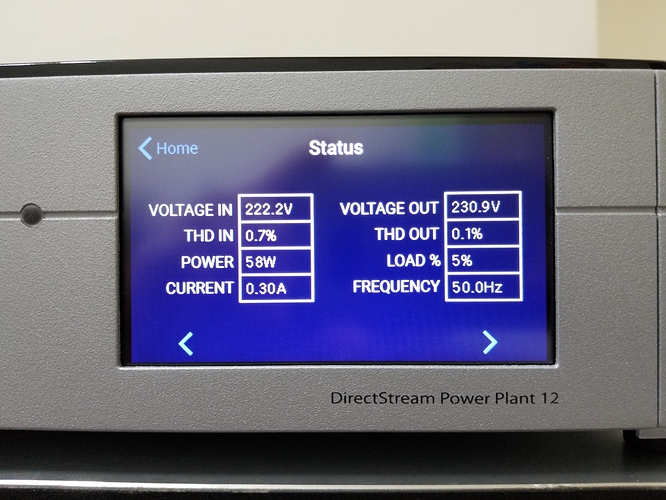 I forgot to ask you earlier…what amount of physical space do you have below the P12
and above the the P12?

What amount of space above and below your P12?
Therein could be your answer…

You may need to rearrange the space around your P12…

I have put out the observation of my P12 fan here

I have followed some of the P12 topics, and found there were some questions concerning P12 fans “problem” such as “ at 50C, fans not on…” or something like “will fans ever turn on…” Personally speaking, I really like to know how the P12 fans work. Searching PSA web did not find info I need, except on the product design page it says “…The next challenge was adding whisper fans to the bottom of the heat sinks; fans so quiet that…”. I have P12 purchased directly from PSA on April 28, arrive…

In your case, if both fans do not stop after the initial main power on (wait for awhile to turn on main power back to let P12 cool down), might need to check with PSA support.

The internal fan of P12 is running, the heatsink is cool but seem they would not stop, but luckly do not hear any noise come from the fan, but i worry thevfan running 7/24 will affect the fan life time. So i want to know your P12 normally those fans is stopped ? 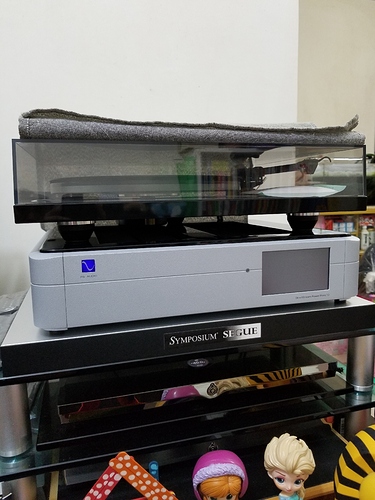 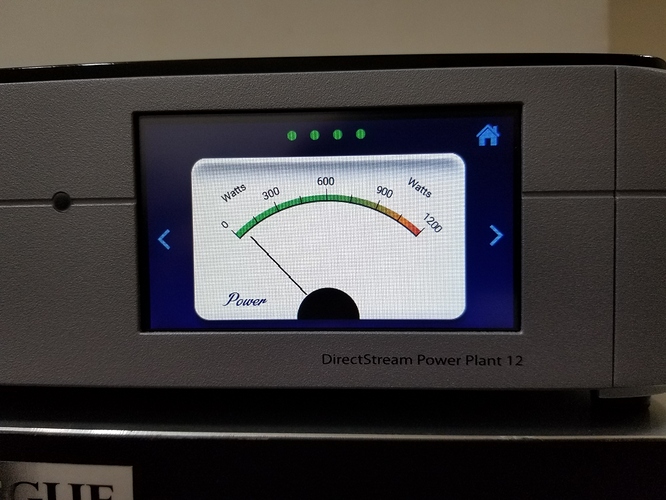 Ok here is what ought be done…
Your P12 has no ventilation on the bottom or top
So create a minimum of at least 2" of space by lifting
Your P12 so air can flow up from under the bottom.
As it sits now there is not room at all for air circulation,
Next step get some anti vibration blocks to lift your turntable up some more …it seems you may have a little over an inch maybe inch and half…need room for
Air to exhaust…

As quick as you are able get on it right away…you
Don’t want to heat damage or shorten your P12 lifespan.

Your power meter reflects minimum power being
Used…and this is with your Devialets powered on.
If so this very good …in my system everything on
my power meter sits at about 220 watts…

My fans come on only briefly depending on load…
But then again I gave much more room in my cabinet
Below and above my P12.

So summarizing then:
Priority #1is main priority increase breathing room below P12 at least 2" if not more.

Now a day I tried put a tissue on the P12 cover then see the tissue is floding, but i cannot hear any noise come from the fan, so i found that the fan is running in slow speed.

The P12 is designed to draw air from the base sittng on a flat surface, and exhaust out to top. The pictured install should be 100% fine. If the P12 can draw, as it is designed, from the base the exhaust clearance is more than adequate and exceeds the base intake restriction.

You should not have to darn near to hang the unit in free space to cool properly and, I doubt that’s the situation. The fan are controlled with a thermocouple and run as needed. They are high quality quiet PC case fans with very high MTBF 24/7 run times.

They will spin up at start, and then slow to a stop or low RPM based on the thermocouples signal. I checked with Paul McGowan about the fans.

I will be using the P12 unit for my source power, no power amps…that’s a P20, and as such it will likely not run hard enough to spin the fans up, ever. If the clearence on top of the unit meets or exceeds the intake area, it should cool fine.

You should not have to darn near to hang the unit in free space to cool properly and, I doubt that’s the situation. The fan are controlled with a thermocouple and run as needed. They are high quality quiet PC case fans with very high MTBF 24/7 run times.

Oh well it’s the op’s P12 in question not mine…he may do with it as he wishes…
Right?

I’ll check with Paul, but I doubt the standard mount on a table should be inadequate to cool the unit. The customer should not have to essentially replace the existing feet to give adequate ventilation into the unit.

The fans are high pressure low RPM fans, and the top clearance shown in the picture should be MORE than adequate to cool a properly designed unit.

The manual does not state the unit needs additional intake area clearance over what the current feet have designed in. The exhaust impedance needs to match or exceed the intake. The intake impedance is the bottleneck in this design. You can’t move more air than you can pull in.

Once you match the output exhaust air impedance to the input exhaust impedance, you’re done. Thermodynamics says it can’t get better past that.

So that’s the physics of the cooling.

Location Considerations
Once your new Power Plant 12 is unpacked, you’ll need to find a convenient place to set it.

The Power Plant 12 should be placed with consideration of providing air circulation to the unit. If you wish to install the P12 into your component rack, the purchase of an aftermarket, custom-designed shelf may be necessary.

Galen if the op’s P12 unit goes down due to heat failure…will you replace it for him
in light of this?

This the last I will say about this on this thread…

The steps you take are yours alone to decide.

Thanks everyone for help, l try to find a best place to setup let it have enough space to breath the air and see the fan it is still running in slow speed.

I have the manual, and 35 years of experience with test equipment in HOT manufacturing plants that cool the exact same way.

Facts are not present in your interpretation of the manual’s statements. It isn’t your fault, though. The manual really doesn’t factually say ANYTHING more specific than don’t limit the airflow. That’s not much. So what limits the airflow, really?

The UPPER impedance has to have clearence to match the lower…THAT is what the manual VERY loosely suggests. The cooling is the DELTA of the incoming air to the heat sink’s BTU/watt dissipation rating and CFM of the fan airflow amplifies that, same as any heat sink. Cooler air and more of it past the heatsink equals more BTU/watt cooling. Once the limit of either the input (likely on this unit) or output airflow impedance is reach more fan RPM is just noise.

As far as “ventilation” that reference is such that you don’t install it inside a box with no natural air circulation as this diminishes the DELTA of the input to outputs max air temperature, the lower the ambient air coming in, the more BTU/watt you can cool at a given CFM fan speed before the max temperature is hit.

The unit will protect itself from too high temps with a feedback loop on the thermistor that controls the units internal device temperature. This is not a long term suggestion for operation, but a process that encourages better ventilation when it is tripped.

This unit cools no different than a PC, or any electronic device. Again, the clearance on top of the unit in the picture is MORE than ample with 20C ambient air in the open stand it is on. If this unit gets too hot in this configuration, we have real problems mission control.

The long term internal temperature of silicone can be as high as 95C, even higher for VRM MOSFETS, to 105C even. What constitutes “hot” depends on the devices efficiency load line range and cooling efficiency.

Like a thermostat in a car which determines the units operating temp and adjust accordingly to keep it in steady range. You don’t need to know the operating temp or the incomng air temp. You do need to know if it is “too high” based on the water temp “OK” range. Running the car at 120F in a windless state won’t allow the same conditions of the car MOVING at 70F. The thermostate will adjust within reason to keep the internal temp near the same all the time. Electronics are the same. Fans are variable to not be on all the time unless the unit reaches a set recommended device temp. Same as on your car, the radiator fan does not run UNTIL it reaches a max set temp. Same as a good PC fan set-up or this regenerator.

I agree with you that the manual “suggest” to keep it cool, but no, it doesn’t really give a proper technical set of poperties to do so. High-End test equipment DOES give clearence and with high variable ambient temperature charts to adjust the units clearances based on ambient air to reach a suitable internal temperature. As the temps around the unit go up, the clearances need to increase to a MAXIMUM, and after that Scotty’s given it all she’s got unless you ramp up the cooling efficiency (lower the airflow impedance and more CFM at that ambient temperature). More space won’t work anymore and faster fan RPM is just noise.

So yes, more space above the unit is the “best case” for lowest fan speeds even if it isn’t needed, but the unit will operate properly with less than an “open air” installation as long as the output airflow impedance matches the input and the CFM of the fan prevents the upper temp limit from being tripped. If your fans are running at max, consider why. If not, you should be fine with well designed electronics.

The unit will do this at startup - it’s checking the fans are working.

It then, like a computer, will run at a slow speed to keep air moving and only ramp up again when the unit needs it.

If it was running the fans 100% no matter what, then we have a problem.