I thought I would share my impressions of the Sprout 100 using my Rasberry Pi Volumio as a streamer connected to the Sprout using USB. In reading through the various PSU forums I noticed numerous references to the Pi and thought this review might be helpful.

Here are the components of my system:

Connectivity of Sprout and Volumio (Linux).
I was concerned that technically PS Audio does not support Volumio (Linux). But after discussing this with the knowledgeable and friendly PS Audio associate, Caleb, and reading various threads on the PS Audio forums site, I felt comfortable with the purchase. So how did it go? I connected the Rasberry Pi via USB and Voila! Volumio instantly read the PS Audio DAC, calling it “PSU Audio USB 2.0.” But will it play? And yes, it does! streaming Qobuz, FLAC, DSD, AIF and pretty much anything coming from Volumio played flawlessly.

Edit: After several months of using the Volumio integration, all the above is accurate however there is one problem that should be mentioned. When you change the Source on the Sprout100 to Vinyl or Bluetooth or whatever, often times when you come back to digital, Volumio will not play via the Sprout and you need to reboot Volumio. Not sure why this would be but it happens quite a bit and therefore i wanted to note this accordingly.

Analog Input using Volumio compliant DAC:
What also reassured me about purchasing the Sprout was that if the Sprout could not coexist with the Linux Volumio software there was the analog fallback, ie meaning you could plug your Volumio compliant DAC into the analog inputs of the Sprout. So, Pi – DAC – Sprout. So I tried that. I added in my SMSL SU-8s DAC (ESS 9068AS) by running USB from the PI to the SMSL and then analog out into the analog inputs on the Sprout. I played the same song, “Samba Saravah” by Diana Paton, and although technically I believe the SMSL DAC to be superior to the ESS Sabre 9016 DAC, I really could not notice a difference. They are both Sabre DACs and If anything, the SMSL sounded a bit lower coming through the analog. But honestly not sure. But it is a great option if you love your current USB DAC.

Volumio/DSP Plugin and DSD files
There is one huge difference I wanted to share that involves playing DSD files through Volumio when the DSP plugin is turned on. For some reason, my SMSL Su-8s DAC nor my Topping D90 pro DAC could not play DSD files when the DSP is turned on. This obviously has nothing to do with the Sprout. Turn DSP off, no problem, DACs play DSD. But this is annoying when you have DSD files in a playlist and suddenly everything just stops and you have to reboot Volumio to get Volumio up and running again.

But, But, But when you use the internal DAC in the Sprout, DSD files with Volumio DSP turned on play flawlessly. How nice is that? So somehow the Sprout improves the Linux experience in this case.

Bluetooth
I am not a big Bluetooth person for music but for TV why not? So, I paired my Samsung TV’s Bluetooth to the Sprout and that was quick and efficient. Also, no lag in voice/visual timing between the Samsung TV and the Sprout.

Remote
Firm, Solid feel to it, fitting of what you would expect from a high-end company. Think the new Apple TV remote and less like the other DAC flimsy remotes or those older credit card type remotes. It would be good if it included buttons to change the source, as it only allows for ON/OFF and Volume up and down and Mute. But that is nit picking.

Manual
Outstanding, I read and enjoyed every page of it. It is helpful and useful. You know that you bought something substantial when they put the specs right up front. Moreso, It is somehow less techie and more explanatory. Here is why we did this and here is what you plug into what etc…

Conclusion
In short, using the Rasberry PI Volumio Solution, which produces bit perfect audio, you can get virtually anything into this Sprout,
• Network streaming of Qobuz, Tidal etc. via Volumio streamer
• DLNA of local files coming from hard drives, and USB sticks on your network via Volumio
• USB files plugged into Volumio
• Bluetooth from TV or phone.
• NO mention here if Vinyl since I do not have that option.
To me this is as good, if not superior, to other solutions such as Blueound Node, or the Yamaha WXC streamer or various other solution in a box. This does all that but adds in the brilliance of PS Audio!
While I have said nothing about the sound of the Sprout coupled with the KEFs all I can say is Merci beaucoup!!! PS Audio Ces’t magnifique! And I will leave the whys to other more capable audiophiles. 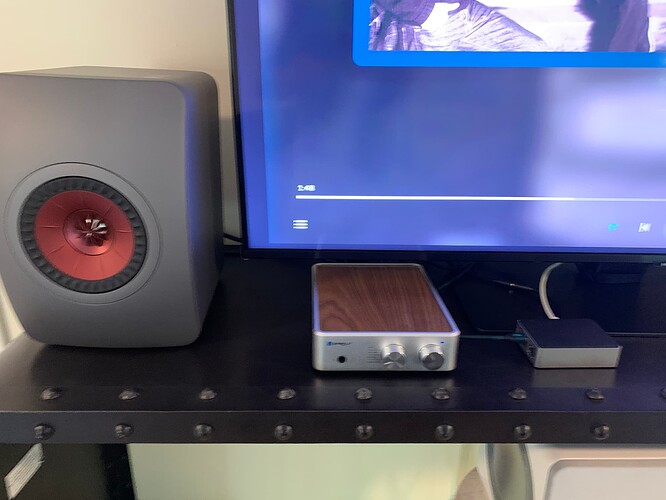 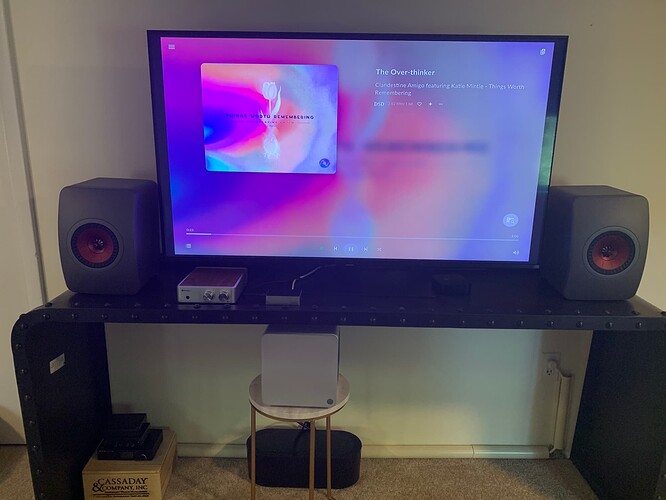 I will add a comment about the Sprout/Kef pairing. As the Kefs are 8 ohm speakers I was worried that the Sprout would not be able to drive them properly given the Sprout puts out 50wpc at 8 ohms. And the Kefs ask for 50 to 100 wpc.

Not to worry. This combination produces plenty loud sound in my 12 by 40 office/music room. So loud that my wife suggested reconfiguring the room so the Kefs are pointed towards the 40 as opposed to the 15 foot walls.

Well that is certainly a heck of an introduction! Welcome aboard!

Great post and welcome to the forum. It’s a pretty cool place to hang out and discuss everything in a non combative setting.