Schiit seems to have a killer combo, with those horn speakers, wish I could hear that system, nice set Chops. It’s the good Schiit.

The only thing about Schiit DACs is Schiit’s rather negative attitude towards DSD and MQA. Although I agree with their opinion about MQA they declare DSD dead and listening to my Blue Coast Music I have no clue what the hack Schiit is Talking about. I just prefer a system, when paying thousands of Euros, to play any formats modern digital services feed the system with. The DACs of PS Audio, Chord, T+A, dCS, ELAC, Hegel and the likes don’t confront me with music format head aches.

Schiit is not alone though, Primare, Linn etc. also are not big on DSD either, while yet considered to sound excellent, so maybe my concerns above are not a big issue. I hate this audio file format Schiit. When is this audio video industry ever going to standardize. If not on one format why not on all. It’s actually why I dislike MQA, it’s just added confusion.

Yeah, I pretty much agree about making everything standardized. Why have all of these different formats come out that all do similar things with similar results. Just like SACD and DVD-Audio, not to forget HDCD back in the day, except that was a 2-ch only format (which is all I need anyway). Heck, why even have different bitrates and such, like DSD 64, 128 and 256? Just stick to one stinkin’ bitrate and be done with it. Same thing with digital outputs, Toslink, coax, USB, and now HDMI. Just stick with one and go with it. Yeah, I know they carry different bitrates and such, but if we had a standardized bitrate then we’d have just one style output.

Anyway… I’m going on a rant I don’t care to be on. LOL

The reason I want to go with the Schiit Bifrost is because I had the first version years ago, fully upgraded it and knew what it was capable of. The new Bifrost is even better than that now, plus they are always hardware (and now software) up-gradable. There’s not too many DACs out there capable of that sort of updating. So IF Schiit ever decide to get into DSD or MQA, it would most likely be a hardware and software update to make the Bifrost capable of those formats. Plus it’s a lot of DAC for the price.

First of all, congrats on basically a wholesale change-out of your entire system in one fell swoop…that was ballsy! I on the other hand, swap out a phono stage cable and fret over it for a week or two

So I have never heard the shiit stuff, how is the build quality? Overall do you feel you took a step up or back from the Stellar stack? I have heard the Stellar gear and that’s a pretty sweet price to performance kit you’ve replaced…

Anyway, hope your enjoying the heck out of it!
-JP

Years ago I owned and upgraded the original Bifrost an then did the stupid thing of selling it to help pay off the Oppo 105D that I purchased at the time. Huge mistake as that stupid Oppo was a constant PITA with it always crashing whether stream Tidal or attempting to play a Blu Ray disc. All it did was crash. Not to mention the darn thing wouldn’t even do seamless streaming.

So knowing how good that Bifrost was, I knew that their little Mani phono pre was probably going to be excellent as well for the money… And it IS. So with batting a home run with both the original Bifrost and the Mani, I knew from experience and reading actual owner reviews of both the Freya + and whether to go with a single or dual Aegir amps that I would be totally safe.

Schiit has not let me down! This is some good Schiit!

I wanted the original Freya because I wanted to get back into tubes and the fact that it has 3 different ways of running (passive, JFet or tube), but I didn’t get it only because of the fact that when in either passive or JFet mode, the tubes were still sitting there cooking away, just burning away the hours. And I leave my system up and running 24/7, so that was a no-go for me.

After learning about the updated Freya + and the fact that the tubes do in fact turn all the way off, I wanted to make the move. And then when I bought my Klipsch’s and read about the Class A Aegir amps, that really got me going again on my Schiit binge. (that sounds nasty)…

And to be honest, the only reason I went with two Aegir amps is not for the extra power, but because the only way to run a balanced connection to them is to run them bridged mono.

Did I make the right choice and was it a move up? Most definitely!

I don’t mean to bash PS Audio or the Stellar stack (and I’m not), but that stack doesn’t stand a chance against my current Schiit stack. No way, no how.

Everything has remained the same in this system other than the preamp and amps. With the Stellar GCD, I had my Bluesound Node 2 connected both via digital coax and analog so I could switch back and forth between the GCD’s DAC and the Node 2’s DAC. Obviously, with the Freya +, I can only connect the Node 2 via analog, and this setup is blowing away the Stellar stack, even including the GCD’s built-in DAC.

I honestly wasn’t expecting that big of a difference between both stacks, mainly just a sideways move more than anything else, but with the option of getting a little lower gain and the ability to play around with tube rolling again.

I won’t go into a full review, but with barely 24 hours on the system so far, and around 18 hours on the stock JJ 6SN7 tubes (as I switch over to passive or JFet mode at night when we’re all asleep), this setup offers a much wider, deeper and taller sound stage with a very life like center image of actual size and space. That’s obviously the biggest thing this setup is doing a lot better than the Stellar stack could manage, is sound stage, center stage and midrange.

Stage depth, instrument layering, multiple vocal tracks, the ability to spew out all of the texture and tangible bass and mid-bass detail. It’s almost like you can tell the difference in brand of drum heads being used, not just the type of drum heads. You can actually hear and feel the texture of either the drum stick, mallet or hand coming in contact with the drum head, as well as acoustic bass or electric bass. You can just about tell what kind of string they’re using and how much finger pressure they’re applying to the strings.

Treble is never strident or harsh, or even slightly edgy sounding. And no matter if you’re listening at a casual volume level or at concert levels, there’s never any cupped, nasal or honk going on. The music just gets louder.

And that’s the other thing, there’s a certain sense of easy and effortless that was not there before. With the Stellar M700’s and these Heresy III’s, I had 350 watts on tap. Now I have only 80 watts on tap, yet it sounds and feels so much stronger, cleaner and effortless.

I can only imagine what’s going to happen when I get the new Bifrost in the mix and have it connected via balanced inputs. I know for a fact that that DAC is going to blow away the one built into the Node 2. That, and I can’t imagine how much more improvement there’s going to be once this system is fully broken in.

I still have a Schiit Bitfrost 4399 in a secondary system. Great device.

What are those power pucks plugged into the WireWorld power strip?

My Bifrost multibit is one of the best hifi purchases I’ve made. It made me realize what Mick Fleetwood’s drums were supposed to sound like. Sadly, a lack of inputs in my primary system relegate it to headphone use with an Asgard 2.

It’s fun when an upgrade has such an impact.

You use them, so obviously you like them, but how do they do what they do? What impact do you feel they offer your system?

They’re just filters, non-current limiting ones at that. They eliminate any line noise coming into the house.

Got inspired and got them out and hooked up again today. With my Sennheiser 600s they sound so much better than they have any right to. My family may regret helping me get them out of the closet today. Good Schiit.

Congrats, Chops. i did the same thing and I really do like the sound the Schiit equipment makes over the Stellar stack. Really nice improvement IMO.

I also did the Yggdrasil DAC, but I will say I’m not seeing the same night-day difference with that over my little Topping D50 DAC.

And in true audiophile fashion, I’ve been wondering if I should have just gone with a Hegel H390 instead! (A bit more than all the Schiit stuff, but man that thing is gorgeous.) Anyway, curious about the speaker cable setup here. Probably completely normal for bi-wiring, eh? (Instead of a set of cables that terminate in two pairs at the speaker end?)

I’m a newbie at this so be gentle.

Thank you sir. Schiit definitely knows what they’re doing, that’s for sure.

BTW, that Topping DAC looks pretty good too! And of course, Hegel is darn nice gear also. I almost bought their preamp a while back.

And the wiring on my amps, the Audioquest cable (top) is a single wire going to the Klipsch. The Wireworld bi-wire cable (bottom) is going to the sub. The bi-wire end feeds both left and right high level inputs on each sub.

The Wireworld bi-wire cable (bottom) is going to the sub.

I’m feeding my sub with the RCA out on the Freya+. But I only have one sub, not two.

Also, depending on the sub, you may still want to try running high level signals to it instead of low level (RCA). The sound quality of the sub(s) jumps up significantly with high level. And you don’t need fancy cables to do it. Just cheap lamp cord will be fine. I just happen to have these Wireworld bi-wire cables laying around, so I figured why not.

Also, depending on the sub, you may still want to try running high level signals to it instead of low level (RCA).

It’s just a small Cambridge Minx sub in my office. No high-level inputs on that one.

Snow day in Denver! Nice opportunity to continue the ‘break in’ on the brand new Stellar GCD/M700s. I say ‘break in’ because it’s already sounding pretty sweet. 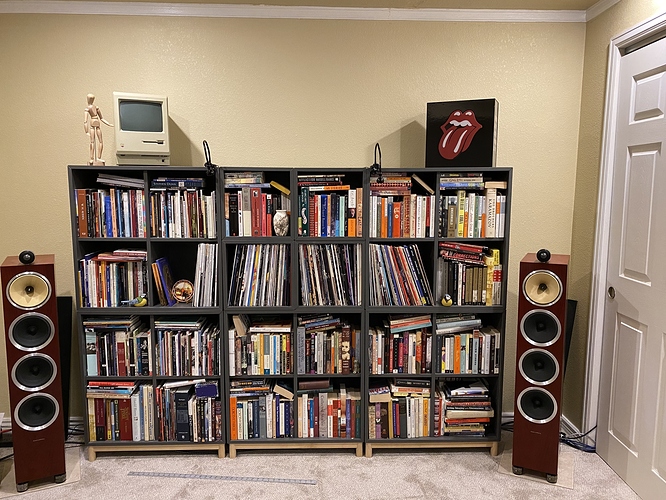 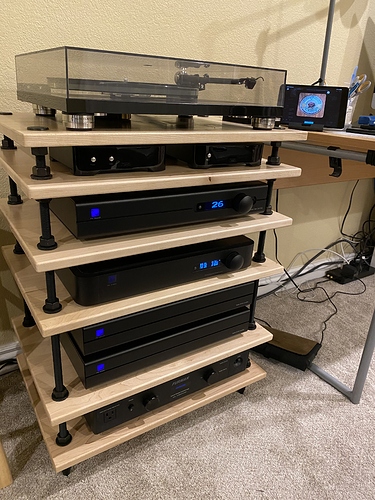 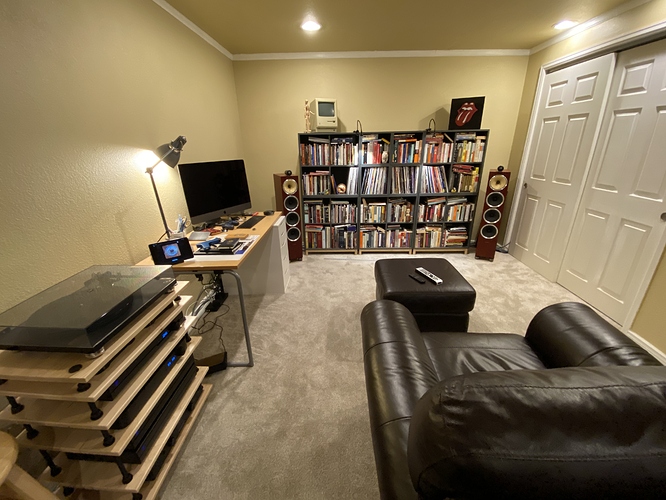