Thanks! The fundamental problem is the asymmetry of the space. Not much I can do about that for the time being.

There is a biggish rug and some padding elements. Wife calls them dog beds. She’s very impressed that I care about the dog’s wellbeing so much that I want him to have lots of big and soft beds. I’ve been thinking of the Harmonix room tuning dots but they are hard to find in this part of the planet.

yes, i can see you got things covered…

What amp stands are those?

That’s not his system though.

It’s the World of McIntosh Townhouse

Beautiful set up, would you mind sharing brand and type of the equipment. I like the speakers. They look like a piece of art.

What amp stands are those?

Beautiful set up, would you mind sharing brand and type of the equipment. I like the speakers. They look like a piece of art.

Thank you. Speakers are early Eidolon by Avalon Acoustics, a Colorado based speaker manufacturer. Very musical speaker, as are all Avalons, but would benefit from a bit more space around them. I’ve had them a long time but can’t really think of anything I would want to upgrade them to except maybe Eidolon Diamond, a later model with a diamond tweeter.

Time for sharing the updated system (you find a rough list of the whole system on my expanded profile). The major changes have been:

Overall: the system never sounded that good, also, or maybe especially, at very low levels. I can get so lost in the music in my (rare) listening sessions, when the family finally sleeps and the lights are off…

It’s amazing that changing minor things like a power supply of an ethernet router can have these subtle, but important, audible impacts… This also demonstrates that the speakers, the pre-amp, the DAC etc. still have potential… Ah, there it is, the never ending story… 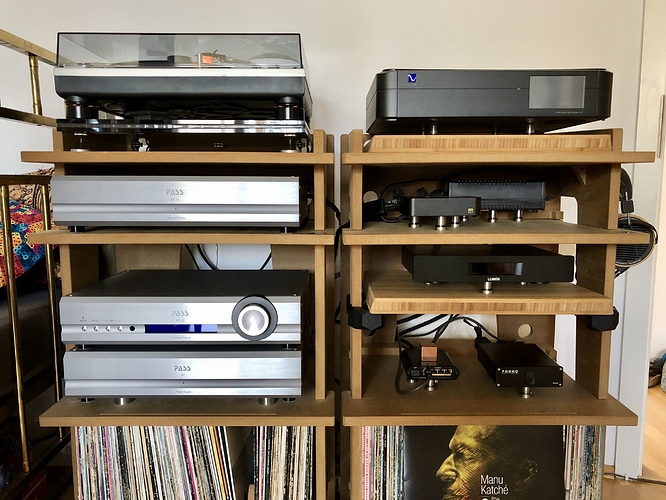 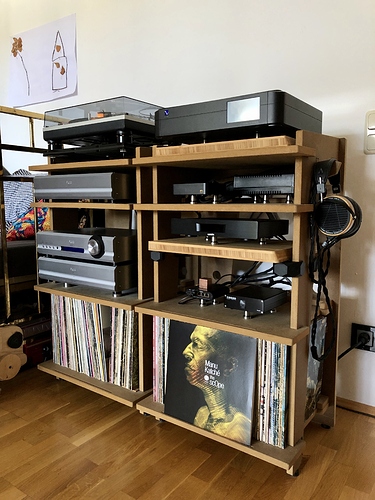 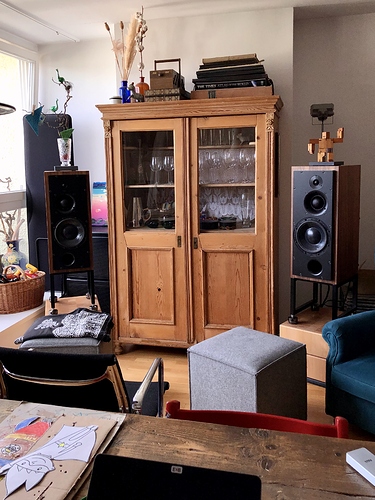 Are the objects on top of speakers sound tweaks or decorative elements - or both? Totem Acoustics sells various cones (called Claws) to be placed on top of speakers to reduce the resonances and improve the sound. I don’t see why the same effect could not be achieved by other objects as well.

Hi @Philipp_Schaefer what are those black brackets holding up the Ikea cutting board with the Lumin?

Sorry for the loss of your Dog. We dread that day around here but our Happy is only 7 yrs. young.

Said goodbye to the Stellar’s last week. Taking a different direction in my rig (and probably my last for many years). Through TMR, I got an excellent deal on a 20 year old BAT VK50-SE while I was actually serious on buying a BHK Preamplifier but they didn’t have one in black. My gain (pardon the pun) actually. The BAT gives me 2 pairs of XLR out’s and a “Tape Out” and 5 XLR only inputs. I need this kind of flexibility (BHK doesn’t) in my new setup since I plan on bi-amping the KEF 105/3’s with Orchard Audio BOSC (now STARKRIMSON) Amplifier Modules using Leo’s instructions on squeezing 300W@4Ω out of them ! For the Bass section, I am most likely buying a pair of 1000W@4Ω ICE Amps from Parts Express or another pair of Leo’s Amplifier Modules.

My 901’s will be set aside for now (put aside but never forgetten). While I enjoyed my time with the Stellar Amps, it made no sense just to run them as Bass Amps (the S300’s) and overkill (M700 for each of the MidWoof/Uni-Q/Midwoof sections). But they did sound pretty damn good when I did do that (Leo’s Amps seem to pair better with the Uni-Q Drivers as well s the 2 midbass units). The Bottom end was better with Darren’s Amps. The Orchard Audio Amps I auditioned were his Demo kits which are setup as 150W@4Ω with the CU 54VDC, 4.4A provided power supply. 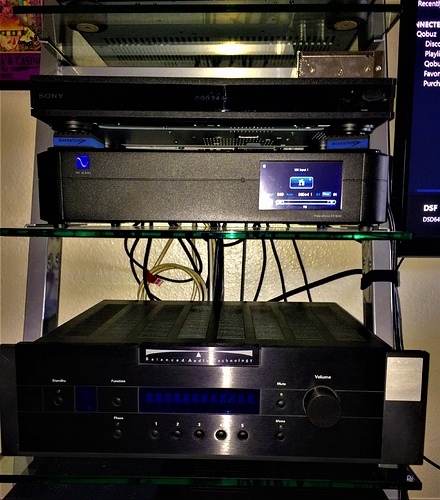 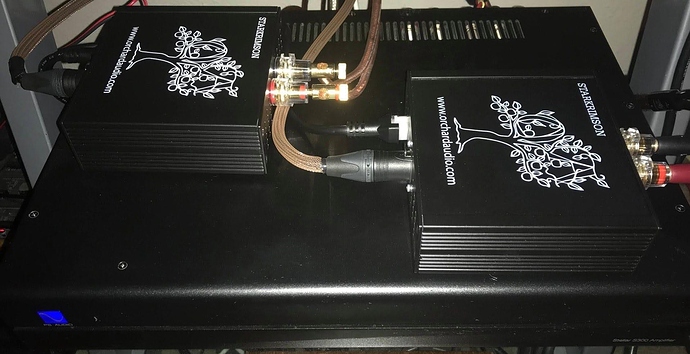 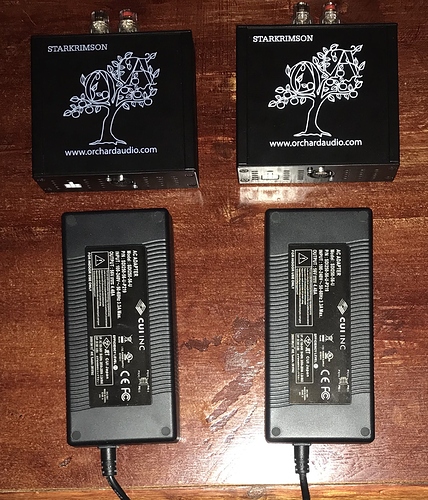 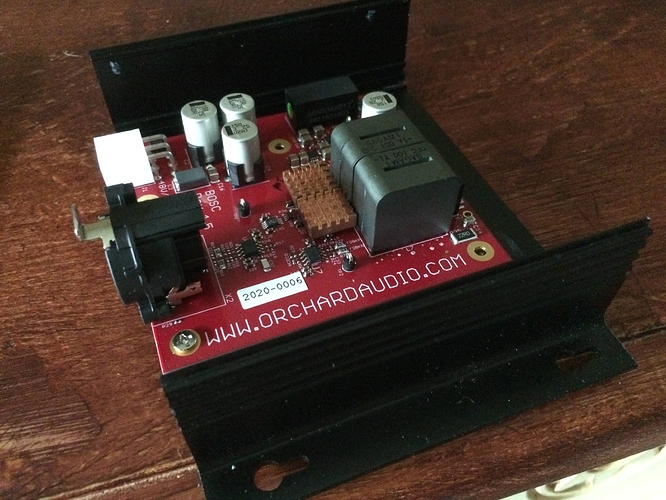 One pair of BAT outputs will go the Orchard Amps (when completed INSIDE my KEF’s) , the 2nd pair of outputs will feed my STAX SRM-007tA Headphone Amp, and the Tape Out will feed a miniDSP also inside the KEF’s (to replicate the KUBE curve).

That’s got to be a right pain to dust.

That’s what my Wife says

They are just for decoration.
Good thing: they can adopt to season and mood.
Bad thing: low damping factor

You can always invent them a purpose to impress random audiophiles you meet on the Internet. The organic (left) vs. angular (right) form is bound to do something to the sound if you just want hard enough to hear it

Hi there. Those brackets are “Connectors” from PlayWood Products that I “misused” for adding another shelve to the Line Phono Turntable Stand: https://www.playwood.it/en/ply-brackets/#Connector

Not ideal, but it works. (Ah, and I have to lower the shelve now. I was to lazy the other day…)

Upgraded my little Cambridge Audio Minx subs to a pair of REL T/5i’s.

(I’d tried a pair of SVS SB-2000, but they were waaaaay too big for this living room space.)

The RELs just arrived this morning (like promptly at 8am), so I quickly unboxed and set up, but I haven’t really had a chance to listen at anything but morning-coffee levels. Going with low-level inputs at this point, as I already had the RCA’s in place – and for the living room, I really think that connection will be just fine.

They fit perfectly behind the Magnepans and I think they look really nice in situ. 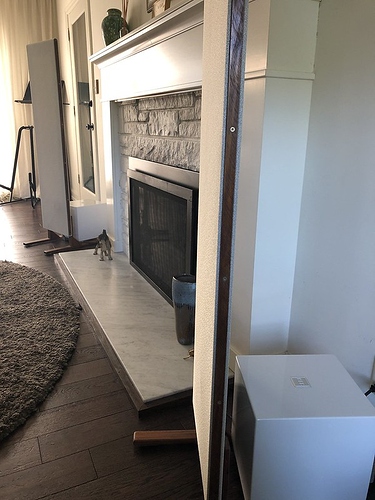