I’m thinking about where to go with my system. Most of my listening is to digital files stored on a NAS, delivered via ethernet into the Bridge II. I like this setup very much, and the sound quality – particularly since the Sunshine firmware upgrade – is the best I’ve ever had.

The one thing I can’t do at the moment is play double or quad rate DSD. I know this can be done with the DirectStream DAC but only via I2S. There is more high rate DSD music becoming available now, but I’m not sure how concerned I should be with this (obviously I’ve never had the chance to experiment with it). I would be very interested to hear how much of a difference people hear when listening to the high rate files.

I believe that the forthcoming AirLens will be able to take an ethernet input and output I2S (please correct me if I’m wrong). I’ve read that there are boxes one can buy that will take a USB input and output I2S, and I assume that they would also do ethernet to I2S. I imagine that instead of investing in one of these, I’m better off to wait for the AirLens, but I’m happy to listen to other viewpoints.

Then of course there is the forthcoming DirectStream Mark II. Do we know yet if it will be able to do higher rate DSD via an ethernet connection, or will it require the AirLens to get an I2S input?

MKII DS will not have a network option. Paul has indicated I2S is the preferred method with it. There are several other I2S options on the market other then the AirLens.

We don’t know a lot. Check the AirLens topic if you haven’t already.

Does this include the Lens as well? Can you give us an idea when that’s going to be available-ish? …if you need a Lens beta tester, I know this handsome fellow in Oregon who would love to participate…

DSD 128 sounds outstanding, and it is as high a resolution as I want to go. Because I frankly do not hear much improvement (or worth it) in DSD 256 or higher.

There are several servers/streamers other than AirLens providing i2s too. Some of them have their own OS so you do not need to use Mconnect HD app (I used to). But the costs are higher also.

Happy to be corrected if my understanding is not up to date.

I have done many comparisons. Not a big difference, but DSD 128 is a little more detail than DSD 64 and DSD 256 has a little more presence than DSD 128. The difference is greater between DSD 256 and DSD 64 as you can imagine. Now I try to get everything in DSD 256 if possible so I will not have multiple copies of the same music. It’s a similar difference to 45rpm’s and 33 rpm’s. I try to go to the 45’s and skip the 33’s if possible because 45’s just plain sounds better. You can fit in a lot more musical information in the higher rate formats.

We’re in agreement, 256 does sound a bit better than 128 as it should be. When I upgrade to a @aangen level streamer and a NAS system I’ll probably change all my 128 to 256

You don’t need a Al level streamer, even a Pro-ject Stream Box S2 Ultra Media Streamer can do DSD 256 for only $849.
https://www.musicdirect.com/network-player/Pro-Ject-Stream-Box-S2-Ultra

The low end Rendu, the microrendu can do DSD512. 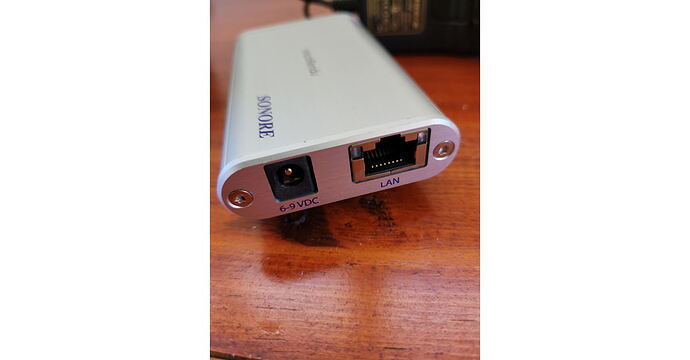 Actually my current streamer/server can do 512 too, I think. But I do not have any 512 file yet. I need to buy some to find out if they sound better. But can DS handle 512?

The microrendu has been discontinued. I’m sure some are available but you can’t buy them directly from sonore. Several of their products are being discontinued.

Thanks to everyone for the replies. It sounds like DSD 128 and higher is definitely worth investigating.

Since the DirectStream mk II won’t have an ethernet input, I’ll have to buy a streamer/converter even if I eventually upgrade the DAC. So while waiting for the AirLens I’ll do some research and then be able to make a decision. If I get a non-PSA streamer, I know that I have to make sure it outputs an I2S signal that is compatible with the DirectStream. I recall that there used to be a list of such products; does anyone know if this has been kept up to date?

Another issue that I forgot to mention in my original post is that I would like something better than MconnectHD. It’s reliable but has some quirks that I don’t care for. I’ve tried a few other control points but haven’t found anything better. (The one that gets best reviews, BubbleUPNP, isn’t available for the iPad that I use.)

Thanks for the suggestion. I just looked at this. It only outputs USB and I’m probably better off with I2S to feed the DirectStream DAC.

I could not find the thread either. I was in your shoes a few months ago and ended up selected Euphony Summus 2. It has Stylus operating system using iPad; it is Roon ready (I don’t have it); it has I2S output, and has interior storage. If you don’t need interior HD there’re more selections out there.

(Edit: do a search on I2S streamer and you will find the thread)

Thanks – I will check out the Euphony! I don’t need storage, since I can (and want to) keeping using my NAS. I don’t care about Roon but would like internet radio that works (I’ve never been able to get the vTuner supported by MconnectHD to work).

I just bought a Antipodes K-50 which has an I2S output.

The DS will only handle up to 256 DSD with sunlight.

There is a sale on Audiogon. The person named audio2cool is offering the K-50 for $14,500! You could plead for more!

That’s a nice deal, but my Euphony Summus 2 is less than 3 month old. So far I am still in a happy marriage so I’m not ready to depart with it yet.