He mentioned it, but didn’t get as detailed about the “time out loops”. Someone familiar with coding might have been able to make the leap, I couldn’t. Need to spoon feed me these details so I can follow along with the rest of the class.

I consider any issues with my DMP water under the bridge at this point, but I mentioned in a separate thread that software development is a different industry than building audio hardware (although I will acknowledge there is some necessity due to the nature of digital audio). And when a company enters a different industry in addition to their core, there be dragons.

Some time ago, one of the big consulting firms pointed out some of the top causes of business failure (i.e. bankruptcy) of small businesses were problems arising from doing an acquisition, facilities (over)expansion, and adding a line of business with a different technology base, among others.

Before retiring I worked for a small company that did all three simultaneously. We handled it fairly well, but it makes for a white-knuckle ride at times and, unfortunately, some of the pain is felt by the customers.

That said, 3.06 is a huge improvement, and things are working tolerably well at this point.

The BHK Preamp display and processor had to be replaced. The BHK250 came with a badly damaged front panel - which incidentally was a BHK300 front panel !

My other BHK250 arrived with a damaged top panel and chips to one of the heatsinks. Also: There was a loud metallic sounding knock from the righthand side of the amplifier, which always happened roughly 20 minutes after the tubes were been powered up in the morning. ( I never switch off the rear power switch )

I know this reads all negativity; but truth be told, after all issues were attended to I haven’t had a minutes bother with them since - musically they are truly wonderful… Most musically engaging amplifiers I’ve owned. The BHK 300s are really incredible and even better musically . Even if I buy other amplifiers ( I do like to change my equipment especially amplifiers ) I will still hold onto the BHK300’s and the Preamp because they are that special to me. Performance wise for the money they are a bargain. My biggest grievance, dissatisfaction isn’t anything do with any of my amplifiers reliability but down to very shoddy quality control and poor attention to detail. Too many times: with 99% of the equipment bought isn’t just blip as I see it !

Although I’m no DMP owner, I have been interested in the reasons of some bigger or smaller SW problems discussed and the management of them.

Now with your explanation several parts of the jigsaw puzzle fit together and as bad as the situation is for some DMP owners, I now understand that and how you got into deep shit and I think you took the right conclusions.

My feeling by watching some other much smaller SW issues is, that you still seem to have a little higher long term bug and QC tolerance than other manufacturers. In my case those bugs are small enough that I count the high sonic performance for the price as the positive other side of the coin. In case all this is not a question of cost vs. testing/QC effort, the time2market (and perfectionism in case of life no term bugs) might have to rise a bit.

And as you say SW brings in new unknown problems, not only in case of bad programming. Activity within this segment, especially if it means an even wider customer base with own demands in terms of new feature/bugfix availability etc. needs serious thoughts. But nothing of this will be new to you, so this is meant rather to express my thoughts than to give you advice, which would be arrogant

I think what stings the most, after sticking with the DMP fix process from Beta to now, is not just being told that a new disc spinner will be coming out to replace it – but one that Paul assured will sound better than the DMP.

I would not be happy to hear that. I invested in a long term an amount that for me as a retired person is quite significant. I want my investment to hold its value and provide me with the best sound possible I am not going to be in the market for another expensive upgrade in a couple of years. One of the reasons that i chose the Directstream DAC is because of the fact that it can stay current with software updates that do not cost me each time. I have owned other equipment that I paid out big money for upgrades that were not significant. For me to give up my PWT and go with the DMP was and is a big deal. I own very few SACD’s so my purchase was to get the most out of my extensive CD collection. it is nice to finally be able to play the DSD layer of the SACD’s i do have.

No one can guarantee it will work better or in fact sound better. After all it will be brought to you by the same people that gave you the DMP in the first place. I kind of like my DMP. But can tell you that last year after getting it I sold a dCS Puccini. I now wish I had not as the Puccini out performed the DMP by a wide margin. Of course it cost more but if I had kept the Puccini and never invested in the DAC and DMP I would be better off today. Hind sight but true facts at least for me.

I would think that the person who can indeed guarantee the new transport will sound better than the DMP is Paul.

With respect to a replacement DMP sounding better Paul did mention a couple of months ago that they had come up with a new and improved Digital Lens, though the prototype blew up before he could do extensive listening. He was very excited about it though and it should be in the Octave Server, whenever it comes to market. I asked if it could be retrofit to DMP, he said no way. It most likely will be used in the DMP replacement, but I wouldn’t expect that for at least a year. I think the only reason a replacement for DMP is occurring is because OPPO abruptly pulled out of the player/transport market. This caught everyone by surprise and PS Audio absolutely cannot be held accountable for that. I know PS Audio made attempts to work with Oppo but they said pound sand …

He is also the same person that extolled the virtues of the DMP in the first place. So no he can’t.

“I think what stings the most, after sticking with the DMP fix process from Beta to now…………”
So True. But instead of the planned obsolescence is sort of unplanned obsolescence, due to the death of the OPPO drives. But surely it will be a less expensive instrument possibly priced between the PWT & DMP, due to it being Redbook only ?

I mentioned to Paul a long time back about a DMP Jr for redbook playback only… I guess the replacement DMP with better sound quality will be on the horizon…but… all things considered…without a huge trade in allowance… I will pass on a cd only version…better sound or not.

That’s the point I was trying to get across and didn’t do very well. The code doesn’t change from machine to machine, but the variances in timing from the machine’s parts contribute to variability - especially when the programmer made the mistake of relying on timing loops. Timing changes in reference to the various clocks and parts within the machines.

It’s three years and yes, certainly. If there was something we did wrong that caused the device to fail even past the warranty period we generally take care of it. We build our equipment to last decades, not just fulfill the warranty period.

We have very few “lemons” and even fewer repairs of products as a company. Our overall rate of failure is about 1%, or put another way, 99% of our products perform as they should and for many years. That said, there’s always going to be a small percentage that do fail, which is why we have a warranty and why we take care of the problems of our products if and when they fail.

Lastly, a “lemon” is a product with chronic failure and that typically shows up pretty quickly for the few that happen.

We’ve never released a new product that didn’t outperform the product it replaced. That’s just us and our endless quest to build better products year after year.

We haven’t even started the transport project yet so anything I say is simply speculation. I just know our history.

Had Opportunity decided to stay in the transport business we’d have stuck with their platform. It’s a great platform.

Until I’m allowed to post in the DMP Update thread again, I consider myself BANNED

A new user can make a maximum of three replies in a single topic until someone replies to them. This cuts down on spam and trolling.

We have several thousand in the field.

I can’t imagine what an order for several thousand OPPO optical drives cost you, and where you stored them all!

It will be a NO SELL for me! 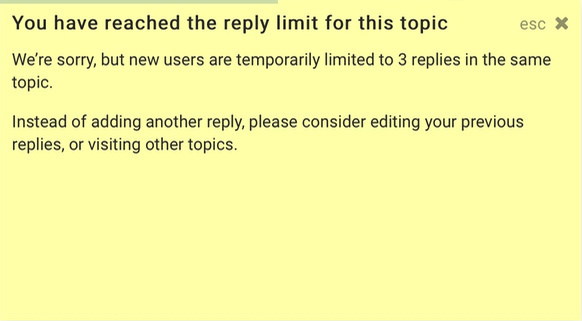 Ah, I see. Thanks for the exlpanation. I still find it an odd policy, because a new user cannot really take part in the discussion.

Maybe “until someone replies to them” should be added to the message, so the new user knows the precise reason why he cannot continue posting. Otherwise, it’s very irritating and frustrating and can even lead to “very dramatic” reactions… OK, I apologise for being a drama queen, now back to the drama that goes on with the ill fated DMP…

By the way, I just discovered hat I seem to have two accounts? How to delete one of them?